by Abdullah Jallow | Jan 13, 2018 | Da'wah - Calling To Islam, Morals and Manners - 'Akhlaaq', Pearls of Wisdom, Purification of The Soul, Scholars of Islam 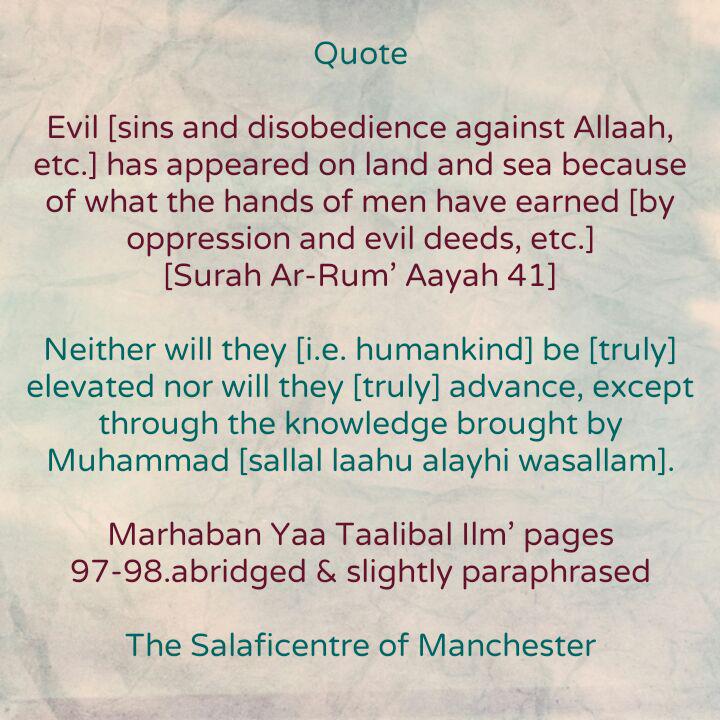 Alif-Laam-Raa; [This is] a Book which We have revealed unto you [O Muhammad] in order that you might lead mankind out of darkness [of disbelief and polytheism] into light [of belief in the Oneness of Allah and Islamic Monotheism]. [Surah Ibraaheem’ Aayah 1]

These numerous [worldly] sciences – which many people are acquainted with – cannot remove humankind from darkness, [rather] it has only increased them in darkness upon darkness. These [worldly] sciences, inventions and the various types of specialized fields of [worldly knowledge], such as medicine, engineering, chemistry, has only increased the people in ignorance upon ignorance, misguidance upon misguidance, arrogance and rebelling against the truth with pride and oppression in the earth.  They have not been guided to the light of the revelation, for had they embraced this revelation brought by Muhammad [sallal laahu alayhi wasallam], they would have been removed from this destructive darkness in which they live.

By Allaah! Humankind have not [morally] declined in previous eras in a manner that is similar to this era -which they refer to as the era of knowledge- because they have not embraced the knowledge brought by Muhammad [sallal laahu alayhi wasallam], and thus have only increased in ignorance upon ignorance, darkness upon darkness, iniquity upon iniquity, and corruption upon corruption. [Allaah said]:

Evil (sins and disobedience of Allah, etc.) has appeared on land and sea because of what the hands of men have earned (by oppression and evil deeds, etc.) [Surah Ar-Rum’ Aayah 41]

Corruption has not appeared on land and sea [in the past] in a manner that is similar to the [corruption] in this era! An ignorant person boasts and says, “This is the era of knowledge and light”, yet it is an era of darkness. You see them behaving like animals and living a life that is lower than the lives of monkeys as a result of depravity and shamelessness, due to being ignorant of the knowledge of the [sharee’ah] and distanced from it, wandering blindly in the darkness of that life which they think is based on knowledge and the era they regard to be one of advancement, even though they are living in an era of moral decline. So, neither will they be [truly] elevated nor will they [truly] advance, except through the knowledge brought by Muhammad [sallal laahu alayhi wasallam].