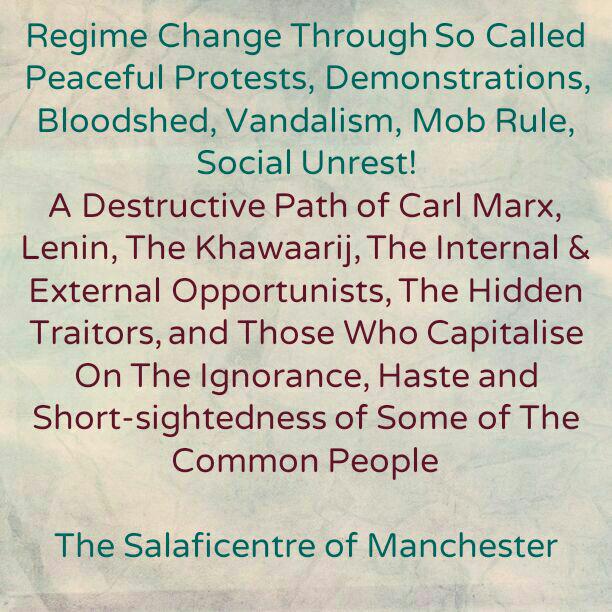 The Messenger [sallal-laahu-alayhi-wasallam] said: ‘’Verily, the one who live among you after me will see a lot of differing, so stick to my Sunnah and the Sunnah of the rightly guided khulafaa.’’

And he [sallal-laahu-alayhi-wasallam] said: ”Ikhtilaafan Kathiirah” [i.e. a lot of differing will occur] and not ”Ikhtilaafan Yaseerah [little or minor differing]; rather it is a lot. The Ummah cannot find safety from this [blameworthy] differing, except by holding fast to the Sunnah of the Messenger [sallal-laahu-alayhi- wasallam] and to that which his Rightly Guided Khulafaah, the Muhaajiroon and the Ansaar were upon.  Allaah [The Most High] said: [ٱلسَّـٰبِقُونَ ٱلۡأَوَّلُونَ مِنَ ٱلۡمُهَـٰجِرِينَ وَٱلۡأَنصَارِ وَٱلَّذِينَ ٱتَّبَعُوهُم بِـإِحۡسَـٰنٍ۬ رَّضِىَ ٱللَّهُ عَنۡہُمۡ وَرَضُواْ عَنۡهُ وَأَعَدَّ لَهُمۡ جَنَّـٰتٍ۬ تَجۡرِى تَحۡتَهَا ٱلۡأَنۡهَـٰرُ -And the foremost to embrace Islaam of the Muhaajiroon (those who migrated from Makkah to Al Madeena) and the Ansaar (the citizens of Al Madeenah who helped and gave aid to the Muhaajiroon) and also those who followed them exactly (in faith).  Allaah is well pleased with them as they are well-pleased with Him.  He has prepared for them Gardens under which rivers flow (Paradise) [9:100]

When the Messenger [sallal-laahu-alayhi-wasallam] informed of us of the differing and splitting that will occur, he said: ”The Jews split into 71 sects, and the Christians split into 72 sects.  And my Ummah will split into 73 sects, all of them in the fire except one.  We said: ”Which one is it O Messenger of Allaah”?  He said: Those who are upon that which I and my companions are upon”

So, there is no safeguard against the Fitnah of [blameworthy] differing in every era, especially during the end of time, except by way of holding fast to the Sunnah of the Messenger [sallal-laahu-alayhi-wasallam] and path of his companions.  This is what will protect us from the fire and this why Ahlus Sunnah Wal Jamaa’ah are called ‘The Saved Sect”– the sect that is safeguarded against the fire on the Day of Judgment. And those in opposition will not be saved, due their opposition and splitting away from the saved sect, except those who are firm upon [the Sunnah of the Messenger and the path of the Sahaabah]. And firmness upon the truth, the Sunnah of the Messenger [sallal-laahu-alayhi-wasallam] and the way of the companions cannot be accomplished except by way of beneficial knowledge. How can one be firm upon something, yet he [or she] is ignorant of it?  We must learn the Sunnah of the Messenger [sallal-laahu-alayhi-wasallam] and path his companions were upon, until we become firm upon it and hold fast to it. An Excerpt: Abridged and slightly paraphrased. Source: From a booklet of the Shaikh titled Asbaab An-Najaat Lil Ummah, see Pdf here: http://www.albaidha.net/vb/showthread.php?t=58811

Regime Change Through So Called Peaceful Protests, Vandalism, Mob Rule, Social Unrest- A Destructive Path of Carl Marx, Lenin, the Khawaarij, Internal & External Opportunists,  Hidden Traitors, & Those Who Capitalise on The Ignorance & Haste of Some of The Common People