A Wise Man Never Engages In Fruitless Debate, Rather He Only Conveys Wisdom- By Shaikh Saaleh Al-Fawzaan

by The Salafi Centre of Manchester | Jan 15, 2018 | Methodology - 'Manhaj', Morals and Manners - 'Akhlaaq', Purification of The Soul, Salaf As Saalih (Pious Predecessors), Scholars of Islam, The Salaf - Pious Predecessors 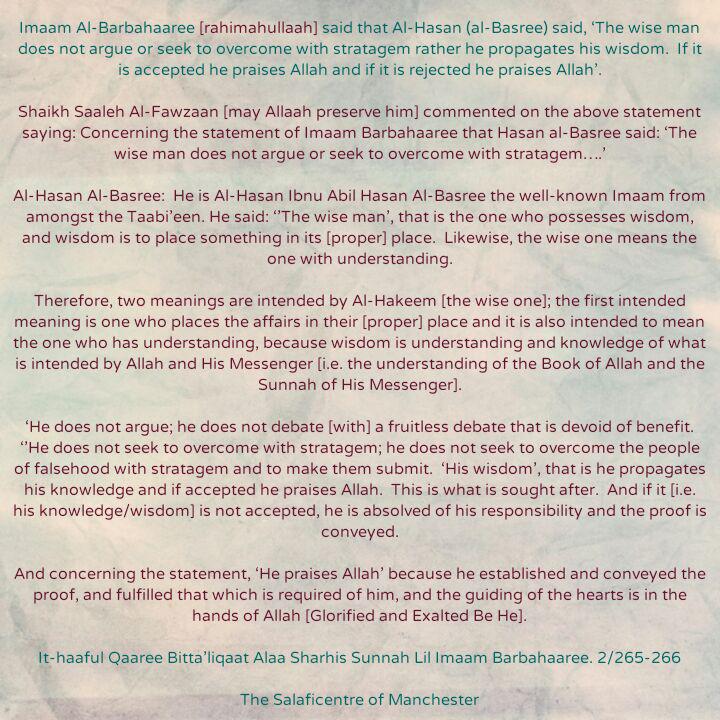 Imaam Al-Barbahaaree [rahimahullaah] said that Al-Hasan [al-Basree] said, ‘The wise man does not argue or seek to overcome with stratagem rather he propagates his wisdom.  If it is accepted, he praises Allah and if it is rejected he praises Allah'[1]

Shaikh Saaleh Al-Fawzaan [may Allaah preserve him] commented on the above statement saying: Concerning the statement of Imaam Barbahaaree that Hasan al-Basree said: ‘The wise man does not argue or seek to overcome with stratagem….’

Al-Hasan Al-Basree:  He is Al-Hasan Ibnu Abil Hasan Al-Basree the well-known Imaam from amongst the Taaýbiýeen. He said: ‘’The wise man’, that is the one who possesses wisdom, and wisdom is to place something in its [proper] place.  Likewise, the wise one means the one with understanding.

‘He does not argue; he does not debate [with] a fruitless debate that is devoid of benefit. ‘’He does not seek to overcome with stratagem; he does not seek to overcome the people of falsehood with stratagem and to make them submit.  ‘His wisdom’, that is he propagates his knowledge and if accepted he praises Allah.  This is what is sought after.  And if it [i.e. his knowledge/wisdom] is not accepted, he is absolved of his responsibility and the proof is conveyed.

And concerning the statement, ‘He praises Allah’ because he established and conveyed the proof, and fulfilled that which is required of him, and the guiding of the hearts is in the hands of Allah (Glorified and Exalted Be He). [2]