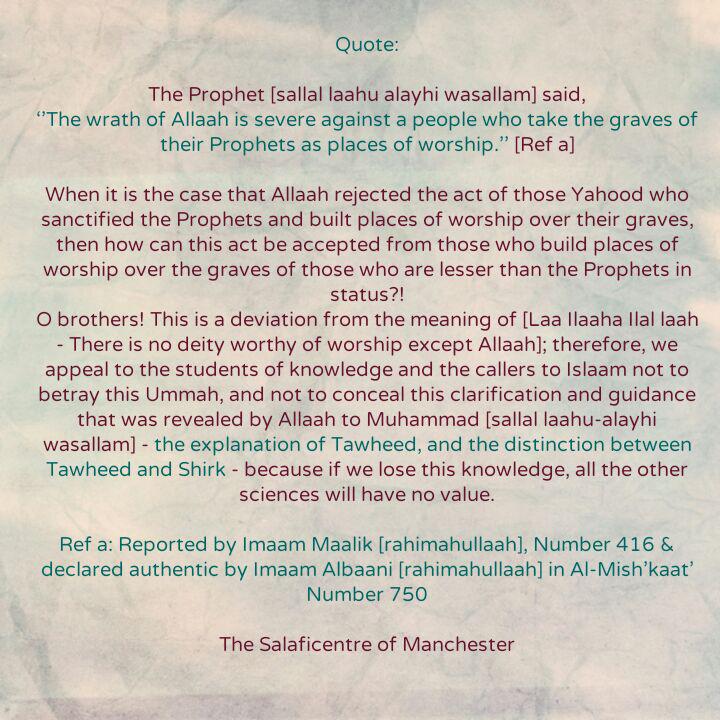 Ibn Abbaas and Aa’isha [radiyallaahu-anhumaa] said: When the last moment of the life of Allaah’s Messenger [sallal-laahu-alayhi-wasallam] came, he started putting his Khameesah [a woollen blanket] on his face and when he felt hot and short of breath he took it off his face and said, ‘’May Allaah curse the Yahood and Nasaaraa [i.e. those amongst them who changed the pure religion of the Prophets and Messengers of Bani Israa’eel – Moosaa, Eesaa etc], for they built the places of worship at the graves of their Prophets.’’ [The Prophet was warning (Muslims) of what those people had done]. [Ref 1]

O brothers! This is a deviation from the meaning of [لا إله إلا الله – There is no deity worthy of worship except Allaah]; therefore, we appeal to the students of knowledge and the callers to Islaam not to betray this Ummah, and not to conceal this clarification and guidance that was  revealed by Allaah to Muhammad [sallal laahu-alayhi wasallam] – the explanation of Tawheed, and the distinction between Tawheed and Shirk – because if we lose this knowledge, all the other sciences will have no value.