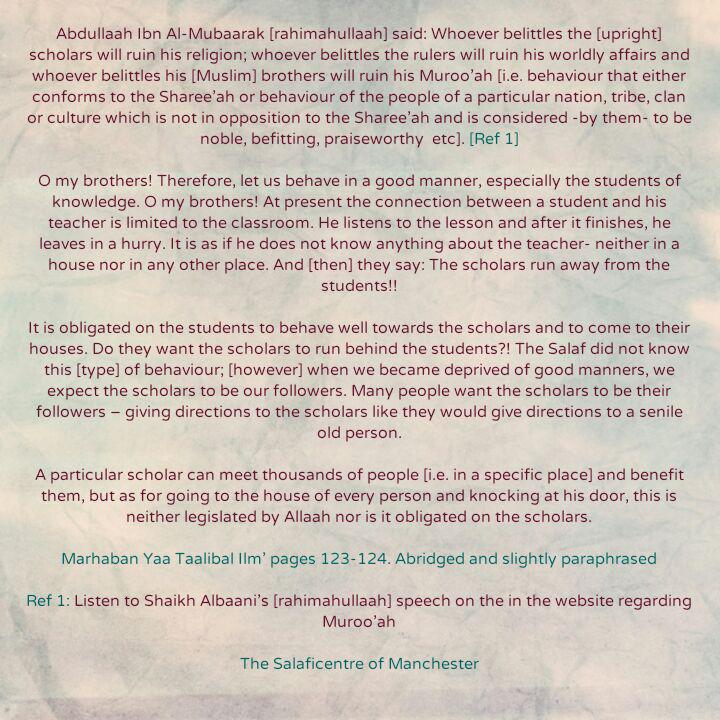 O my brothers! Therefore, let us behave in a good manner, especially the students of knowledge. O my brothers! At present the connection between a student and his teacher is limited to the classroom. He listens to the lesson and after it finishes, he leaves in a hurry. It is as if he does not know anything about the teacher- neither in a house nor in any other place. And [then] they say: The scholars run away from the students!! It is obligated on the students to behave well towards the scholars and to come to their houses. Do they want the scholars to run behind the students?! The Salaf did not know this [type] of behaviour; [however] when we became deprived of good manners, we expect the scholars to be our followers. Many people want the scholars to be their followers – giving directions to the scholars like they would give directions to a senile old person. A particular scholar can meet thousands of people [i.e. in a specific place] and benefit them, but as for going to the house of every person and knocking at his door, this is neither legislated by Allaah nor is it obligated on the scholars.

Ref 1: Listen to Shaikh Albaani’s [rahimahullaah] speech on this link regarding Muroo’ah