[34C] Excerpts from Shaikh Rabee’s Book Titled ‘Marhaban Yaa Taalibal Ilm’ – [Those Who Sit In Their Houses And Abandon The Lessons In The Masaajid, But Claim That The People of Knowledge Are The Ones Who Distance Themselves From The People] 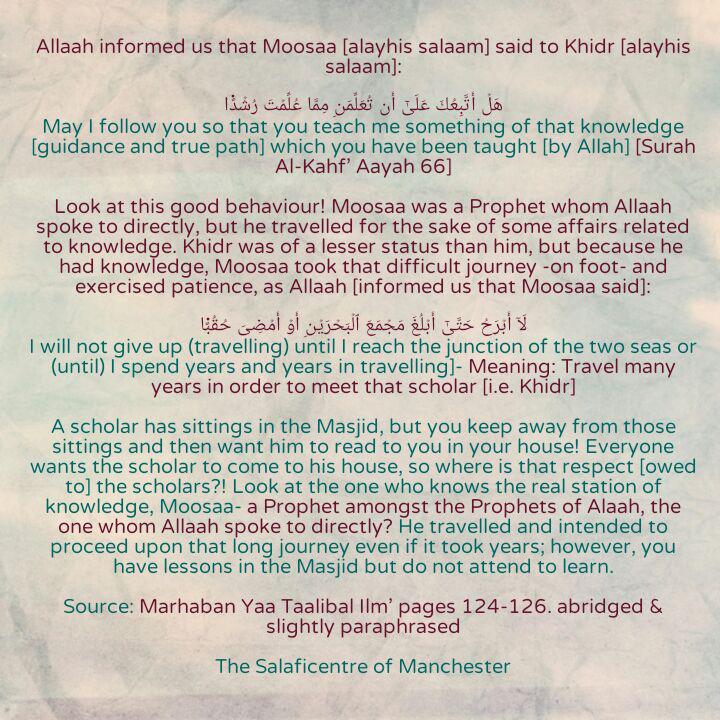 Nowadays the youth say: “By Allaah! The scholars distance themselves from us.” O my brother! You are the ones who distance yourselves from the scholars. And there are those who support them [i.e. support those who say that the scholars are distancing themselves from the people], saying, ‘’The scholars sit in their houses and why do they not recognise our needs?!’’ O my brother! If you were fair to knowledge and had love for it, you would have travelled to seek knowledge from its people as well as urge the people to [do so]. Moosaa [alayhis salaam] -the Messenger of Allaah- once stood up and addressed Banee Israa’eel. He was asked, ‘’Who is the most learned man amongst the people.’ He said, ‘I am the most learned.’ So, Allaah revealed to Moosaa that ‘At the junction of the two seas there is a slave amongst my slaves who is more learned than you [i.e. in some affairs of knowledge].’ So, Moosaa said, ‘O my lord! How can I meet him?’ Allaah said, ‘Take a fish in a basket [and proceed] and you will find him at the place where you will lose the fish.’’ [ref 1]  Allaah narrated this story to us in the Qur’aan [as follows]:

And (remember) when Musa (Moses) said to his boy-servant: “I will not give up (travelling) until I reach the junction of the two seas or (until) I spend years and years in travelling.”

But when they reached the junction of the two seas, they forgot their fish, and it took its way through the sea as in a tunnel.

So when they had passed further on (beyond that fixed place), Musa (Moses) said to his boy-servant: “Bring us our morning meal; truly, we have suffered much fatigue in this, our journey.”

He said:”Do you remember when we betook ourselves to the rock? I indeed forgot the fish, none but Shaitan (Satan) made me forget to remember it. It took its course into the sea in a strange (way)!”

[Musa (Moses)] said: “That is what we have been seeking.” So they went back retracing their footsteps.

Then they found one of Our slaves, unto whom We had bestowed mercy from Us, and whom We had taught knowledge from Us.

Musa (Moses) said to him (Khidr) “May I follow you so that you teach me something of that knowledge (guidance and true path) which you have been taught (by Allah)?”

Moosaa approached Khidr in a way a well-mannered student does. [Allaah informed us that Moosaa said to Khidr]: [هَلۡ أَتَّبِعُكَ عَلَىٰٓ أَن تُعَلِّمَنِ مِمَّا عُلِّمۡتَ رُشۡدً۬ا – May I follow you so that you teach me something of that knowledge (guidance and true path) which you have been taught (by Allah)]?

Look at this good behaviour! Moosaa was a Prophet whom Allaah spoke to directly, but he travelled for the sake of some affairs related to knowledge. Khidr was of a lesser status than him, but because he had knowledge, Moosaa took that difficult journey -on foot- and exercised patience, as Allaah [informed us that Moosaa said]:

[لَآ أَبۡرَحُ حَتَّىٰٓ أَبۡلُغَ مَجۡمَعَ ٱلۡبَحۡرَيۡنِ أَوۡ أَمۡضِىَ حُقُبً۬ا – I will not give up (travelling) until I reach the junction of the two seas or (until) I spend years and years in travelling]- Meaning: Travel many years in order to meet that scholar [i.e. Khidr]

A scholar has sittings in the Masjid, but you keep away from those sittings and then want him to read to you in your house! Everyone wants the scholar to come to his house, so where is that respect [owed to] the scholars?! Look at the one who knows the real station of knowledge, Moosaa- a Prophet amongst the Prophets of Alaah, the one whom Allaah spoke to directly? He travelled and intended to proceed upon that long journey even if it took years; however, you have lessons in the Masjid but do not attend to learn. Many people have lost this good behaviour, rather many ignorant callers to Islaam are not inclined towards knowledge unless you accompany them. By Allaah! Even if you accompanied them, they will not accept this knowledge from you. They will not accept the knowledge of Tawheed, rather they impose their views on the scholars and that they must accompany them. Is this good manners? Is this showing respect to the scholars? A Prophet -amongst the prophets of Allaah- travelled to someone below him [in status and knowledge] just to [acquire some] issues related to knowledge; but you keep away from knowledge and then say: By Allaah! The scholars fail the people! And they make the people reiterate: By Allaah! The scholars fail the youth! The scholars have abandoned the youth!!