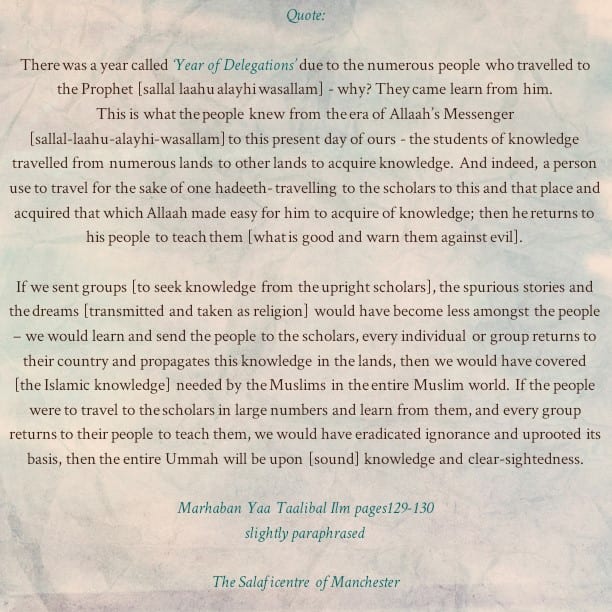 In The Name of Allaah, The Mosty Merciful, The Bestower of Mercy

There was a year called ‘Year of Delegations’ due to the numerous people who travelled to the Prophet [sallal laahu alayhi wasallam] – why? They came to him to learn.  This is what the people knew from the era of Allaah’s Messenger [sallal-laahu-alayhi-wasallam] to this present day of ours – the students of knowledge travelled from numerous lands to other lands to acquire knowledge. And indeed, a person use to travel for the sake of one hadeeth- travelling to the scholars to this and that place and acquired that which Allaah made easy for him to acquire of knowledge; then he returns to his people to teach them [what is good and warn them against evil].

If we sent groups [to seek knowledge from the upright scholars], the spurious stories and the dreams [transmitted and taken as religion] would have become less amongst the people – we would learn and send the people to the scholars, every individual or group returns to their country and propagates this  knowledge in the lands, then we would have covered [the Islamic knowledge] needed by the Muslims in the entire Muslim world. If the people were to travel to the scholars in large numbers and learn from them, and every group returns to their people to teach them, we would have eradicated ignorance and uprooted its basis, then the entire Ummah will be upon [sound] knowledge and clear-sightedness.