[39] Excerpts from Shaikh Rabee’s Book Titled ‘Marhaban Yaa Taalibal Ilm’ – [Allaah Raises People by Way of This Qur’aan Through Sound Knowledge And Action, And Not Merely Through Memorisation] 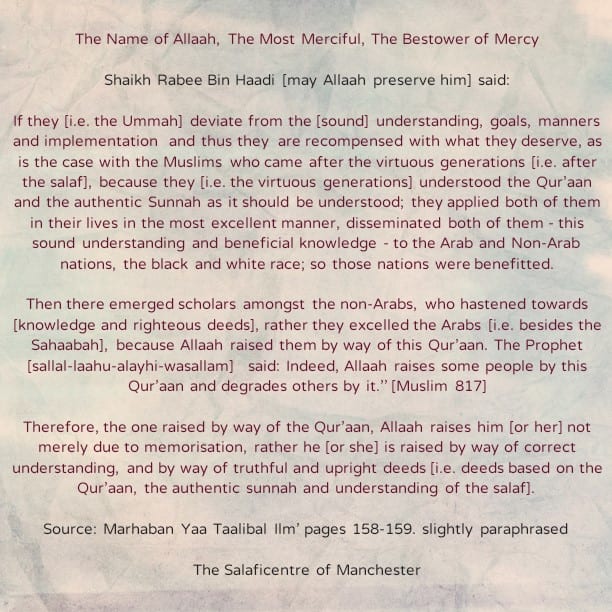 If they [i.e. the Ummah] deviates from the [sound] understanding, goals, manners and implementation and thus they  are recompensed with what they deserve, as is the case with the Muslims who came after the virtuous generations [i.e. after the salaf], because they [i.e. the virtuous generations] understood the Qur’aan and the authentic Sunnah as it should be understood; they applied both of them in their lives in the most excellent manner, disseminated both of them – this sound understanding and beneficial knowledge – to the Arab and Non-Arab nations, the black and white race; so those nations were benefitted. Then there emerged scholars amongst the non-Arabs, who hastened towards [knowledge and righteous deeds], rather they excelled the Arabs [i.e. besides the Sahaabah], because Allaah raised them by way of this Qur’aan. The Prophet [sallal-laahu-alayhi-wasallam] said: Indeed, Allaah raises some people by this Qur’aan and degrades others by it.’’ [Muslim 817]