[42] Excerpts from Shaikh’s Rabee’s Book Titled ‘Marhaban Yaa Taalibal Ilm’-[What Did Aa’isha Say When Asked About The Character of The Messenger?]

by Abdullah Jallow | Apr 6, 2018 | Morals and Manners - 'Akhlaaq', Pearls of Wisdom, Purification of The Soul, Scholars of Islam, Worship - 'Ibaadah' 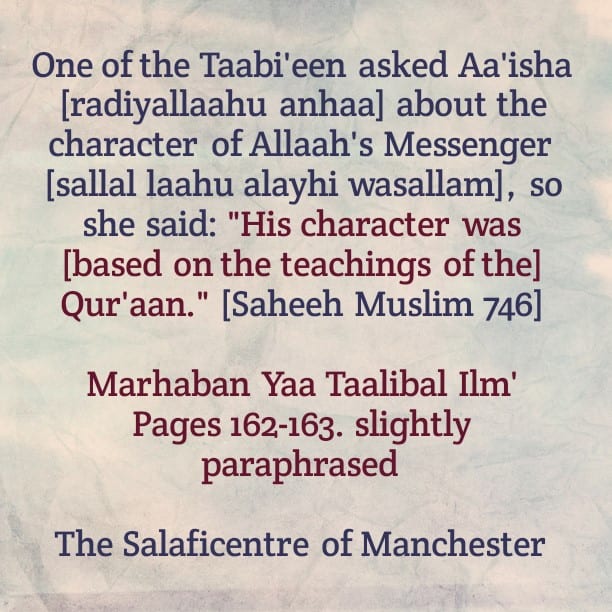 The Messenger [sallal-laahu-alayhi-wasallam] said: If Allaah wishes good for a person, He gives him understanding in the religion.’’ [Saheeh al-Bukhaari. Number 71] Therefore, amongst the signs that Allaah wishes good for a person is that he is granted understanding in the religion – understanding of the Qur’aan and the [authentic] Sunnah, acquaintance with the sound Aqeedah and belief in it, affirming everything stated by Allaah, whether regarding events that took place in the past or events that will take place in future, fulfil Allaah’s commands, refrain from what Allaah has forbidden, study the [authentic] Sunnah and understand it as it should truly be understood; take admonition from its admonitions, refrain from what it orders a person to refrain from and adopt the manners it commands a person to have, just as was the case regarding the Messenger of Allaah [sallal-laahu-alayhi-wasallam]. One of the Taabi’een asked Aa’isha [radiyallaahu anhaa] about the character of Allaah’s Messenger [sallal laahu alayhi wasallam], so she said: “His character was [based on the teachings of the] Qur’aan.” [Saheeh Muslim 746]

The intent behind Fiqh [understanding] is not [merely] studying a book of Fiqh; rather Fiqh is to understand the revelation sent down by Allaah to Muhammad; understanding the Sunnah, honour the Qur’aan and the Sunnah- beginning with Aqeedah, then the rulings of the religion and acts of worship prior to that; then dealings and every other good that has been shown to us by Allaah and His Messenger.