The People Must Be Thanked For Their Generosity -[May Allaah Reward The Students at SP, Ustaadh Abu Mu’aadh, Ustaadh Abu Humaid, Ustaadh Abdul Ilaah And Others For Their Efforts At Salaficentre] 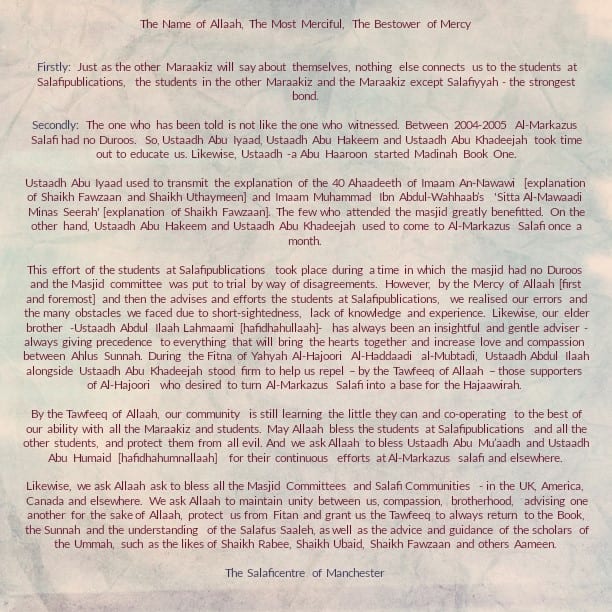 This effort of the students at Salafipublications took place during a time in which the masjid had no Duroos and the Masjid committee was put to trial by way of disagreements. However, by the Mercy of Allaah [first and foremost] and then the advises and efforts of the students at Salafipublications, we realised our errors and the many obstacles we faced due to short-sightedness, lack of knowledge and experience. Likewise, our elder brother -Ustaadh Abdul Ilaah Lahmaami [hafidhahullaah]- has always been an insightful and gentle adviser – always giving precedence to everything that will bring the hearts together and increase love and compassion between Ahlus Sunnah. During the Fitna of Yahyah Al-Hajoori Al-Haddaadi al-Mubtadi, Ustaadh Abdul Ilaah alongside Ustaadh Abu Khadeejah stood firm to help us repel – by the Tawfeeq of Allaah – those supporters of Al-Hajoori who desired to turn Al-Markazus Salafi into a base for the Hajaawirah.

By the Tawfeeq of Allaah, our community is still learning the little they can and co-operating to the best of our ability with all the Maraakiz and students. May Allaah bless the students at Salafipublications and all the other students, and protect them from all evil. And we ask Allaah to bless Ustaadh Abu Mu’aadh Taqweem Aslam, Ustaadh Abu Humaid Saalim, Ustaadh Rayyaan Barker, Ustaadh Abdul Hakeem Mitchell [hafidhahumullaah] for their continuous efforts at Al-Markazus salafi and elsewhere.

Likewise, we ask Allaah ask to bless all the Masjid Committees and Salafi Communities – in the UK, America, Canada and elsewhere. We ask Allaah to maintain unity between us, compassion, brotherhood, advising one another for the sake of Allaah, protect us from Fitan and grant us the Tawfeeq to always return to the Book, the Sunnah and the understanding of the Salafus Saaleh, as well as the advice and guidance of the scholars of the Ummah, such as the likes of Shaikh Rabee, Shaikh Ubaid, Shaikh Fawzaan and others Aameen.