by Abdullah Jallow | May 26, 2018 | Deviated Groups, Sects and Parties, Methodology - 'Manhaj', Pearls of Wisdom, Purification of The Soul, Scholars of Islam 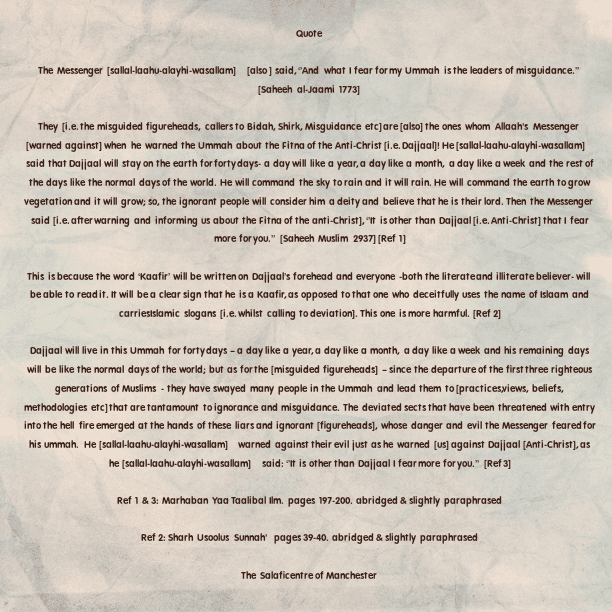 It is not permissible to call them [genuine, upright etc] scholars, because the [genuine, upright] scholars in the Islamic legislation are those who possess [sound] understanding of Allaah’s religion. [The Messenger (sallal laahu alayhi wasallam)] said: “If Allaah wishes good for a [person], He grants [the person] understanding in the religion.” Allaah grants him [sound] understanding in affairs of Aqeedah, Ibaadaat, dealings, Siyaasah and other affairs that are important to Islaam and [important] for the Muslims in their religious and worldly affairs- beneficial to their religious and worldly affairs and preserves their honour and nobility. As for the ignoramuses [i.e. misguided figureheads, bogus scholars, deviated sects and personalities etc], they lead the people to Bidah and misguidance – towards that which distances the people from the [path, pleasure] of Allaah and leads them to the fire of hell.

[Once] the Messenger of Allaah drew a straight line [with his hand in the sand] and said, ‘’This is Allaah’s straight path’’, then he drew lines to the right and left of that line and said, ‘’These are the other paths, on each path there is a devil who calls to it’’, then he recited the statement of Allaah: [وَأَنَّ هَـذَا صِرَطِي مُسْتَقِيمًا فَاتَّبِعُوهُ وَلاَ تَتَّبِعُواْ السُّبُلَ فَتَفَرَّقَ بِكُمْ عَن سَبِيلِهِ – And verily, this is my Straight Path, so follow it, and follow not (other) paths, for they will separate you away from His Path] [Surah Al-An’aam Aayah 153]

The Messenger [sallal-laahu-alayhi-wasallam also ] said, ‘’And what I fear for my Ummah is the leaders of misguidance.’’ [Saheeh al-Jaami 1773]

They [i.e. the misguided figureheads, callers to Bidah, Shirk, Misguidance etc] are [also] the ones whom Allaah’s Messenger [warned against] when he warned the Ummah about the Fitna of the Anti-Christ [i.e. Dajjaal]! He [sallal-laahu-alayhi-wasallam] said that the Dajjaal will stay on the earth for forty days- a day like a year, a day like a month, a day like a week and the rest of the days like the normal days of the world. He will command the sky to rain and it will rain. He will command the earth to grow vegetation and it will grow; so, the ignorant people will consider him a deity and believe that he is their lord. Then the Messenger said [i.e. after warning and informing us about the Fitna of the anti-Christ], ‘’It is other than Dajjaal [i.e. Anti-Christ] that I fear more for you.’’ [Saheeh Muslim 2937] [Ref 1]

This is because the word ‘Kaafir’ will be written on the Dajjaal’s forehead and everyone -both the literate and illiterate believer- will be able to read it. It will be a clear sign that he is a Kaafir, as opposed to that one who deceitfully uses the name of Islaam and carries Islamic slogans [i.e. whilst calling to deviation]. This one is more harmful. [Ref 2]

Dajjaal will live in this Ummah for forty days – a day like a year, a day like a month, a day like a week and his remaining days will be like the normal days of the world; but as for the [misguided figureheads] – since the departure of the first three righteous generations of Muslims – they have swayed many people in the Ummah and lead them to [practices, views, beliefs, methodologies etc] that are tantamount to ignorance and misguidance. The deviated sects that have been threatened with entry into the hell fire emerged at the hands of these liars and ignorant [figureheads], whose danger and evil the Messenger feared for his ummah. He [sallal-laahu-alayhi-wasallam] warned against their evil just as he warned [us] against Dajjaal [Anti-Christ], as he [sallal-laahu-alayhi-wasallam] said: ‘’It is other than Dajjaal I fear more for you.’’

These liars [i.e. misguided figureheads, callers to bidah, shirk, false views and methodologies etc] bring destruction to the Ummah and place them in a state of ignominy in this worldly life and next life. So, this shows [us] the danger of ignorance and the ignoramuses, and the [lofty] station of knowledge and the [upright] scholars. [Ref 3]