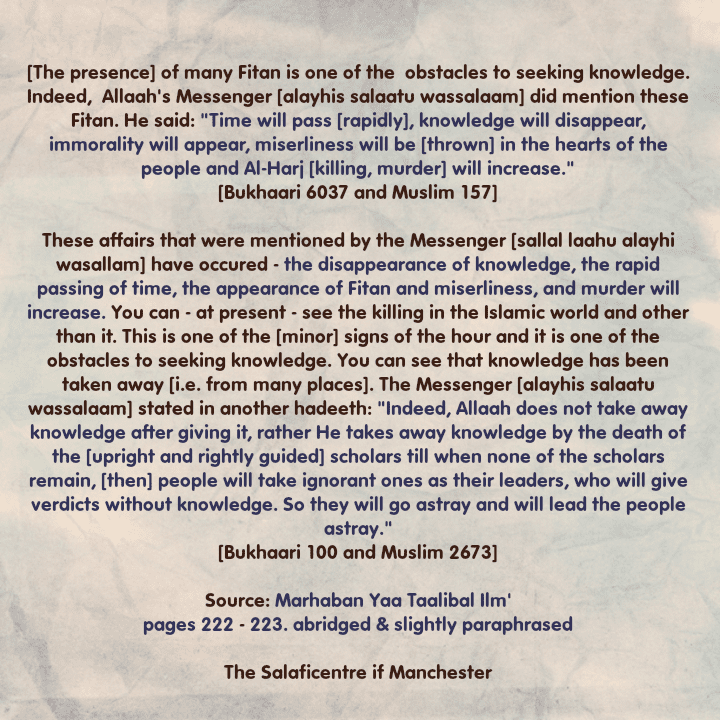 In The Name of Allaah, The Most Merciful, The Bestower of Mercy
[The presence] of many Fitan is one of the  obstacles to seeking knowledge. Indeed,  Allaah’s Messenger [alayhis salaatu wassalaam] did mention these Fitan. He said: “Time will pass [rapidly], knowledge will disappear, immorality will appear, miserliness will be [thrown] in the hearts of the people and Al-Harj [killing, murder] will increase.”
[Bukhaari 6037 and Muslim 157]
These affairs that were mentioned by the Messenger [sallal laahu alayhi wasallam] have occured – the disappearance of knowledge, the rapid passing of time, the appearance of Fitan and miserliness, and murder will increase. You can – at present – see the killing in the Islamic world and other than it.
This is one of the [minor] signs of the hour and it is one of the obstacles to seeking knowledge. You can see that knowledge has been taken away [i.e. from many places]. The Messenger [alayhis salaatu wassalaam] stated in another hadeeth: “Indeed, Allaah does not take away knowledge after giving it, rather He takes away knowledge by the death of the [upright and rightly guided] scholars till when none of the scholars remain, [then] people will take ignorant ones as their leaders, who will give verdicts without knowledge. So they will go astray and will lead the people astray.” [Bukhaari 100 and Muslim 2673]
Source: Marhaban Yaa Taalibal Ilm’ pages 222 – 223. abridged & slightly paraphrased