[61] Excerpts From Shaikh Rabee’s Book Titled ‘Marhaban Yaa Taalibal Ilm’ – [How Would We Purify Our Souls From The Hidden And Visible Impure Traits In The Absence of Acting Upon What We Have Learnt?!]

by Abdullah Jallow | Jul 27, 2018 | Morals and Manners - 'Akhlaaq', Pearls of Wisdom, Purification of The Soul, Scholars of Islam, Worship - 'Ibaadah' 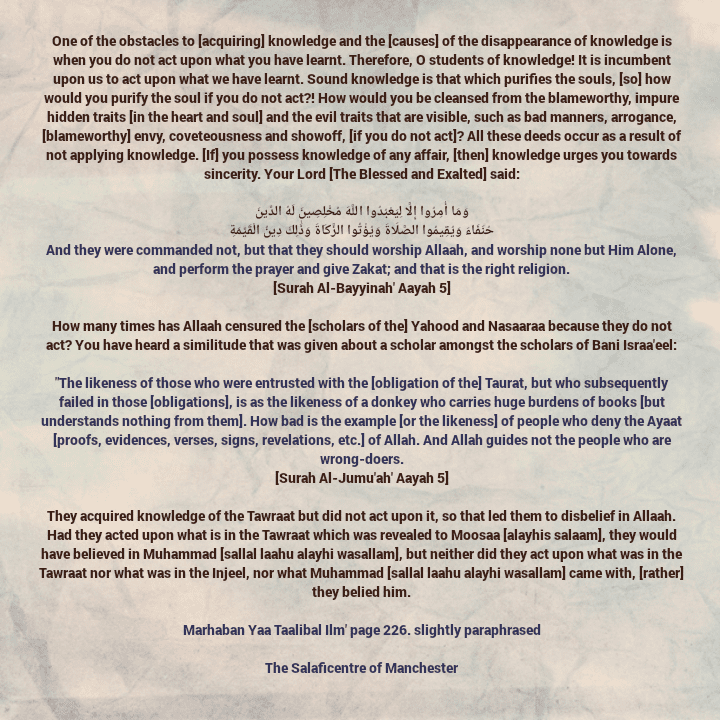 How would you be cleansed from the blameworthy, impure hidden traits [in the heart and soul] and the evil traits that are visible, such as bad manners, arrogance, [blameworthy] envy, coveteousness and showoff, [if you do not act]? All these deeds occur as a result of not applying knowledge. [If] you possess knowledge of any affair, [then] knowledge urges you towards sincerity. Your Lord [The Blessed and Exalted] said:

And they were commanded not, but that they should worship Allaah, and worship none but Him Alone, and perform the prayer and give Zakat; and that is the right religion. [Surah Al-Bayyinah’ Aayah 5]

How many times has Allaah censured the [scholars of the] Yahood and Nasaaraa because they do not act? You have heard a similitude that was given about a scholar amongst the scholars of Bani Israa’eel: “The likeness of those who were entrusted with the [obligation of the] Taurat, but who subsequently failed in those [obligations], is as the likeness of a donkey who carries huge burdens of books [but understands nothing from them]. How bad is the example [or the likeness] of people who deny the Ayaat [proofs, evidences, verses, signs, revelations, etc.] of Allah. And Allah guides not the people who are wrong-doers. [Surah Al-Jumu’ah’ Aayah 5]

They acquired knowledge of the Tawraat but did not act upon it, so that led them to disbelief in Allaah. Had they acted upon what is in the Tawraat which was revealed to Moosaa [alayhis salaam], they would have believed in Muhammad [sallal laahu alayhi wasallam], but neither did they act upon what was in the Tawraat nor what was in the Injeel, nor what Muhammad [sallal laahu alayhi wasallam] came with, [rather] they belied him.