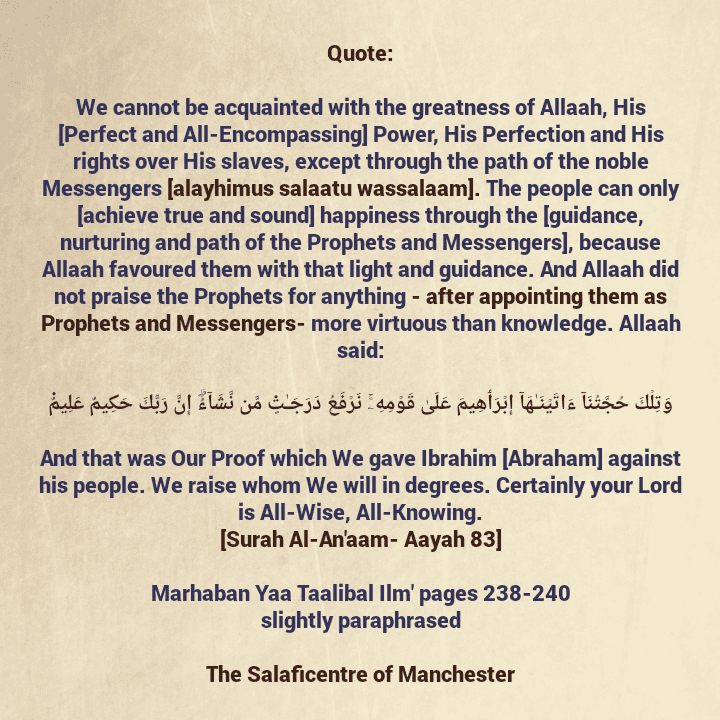 Shaikh Rabee Bin Haadi [hafidhahullaah] said: We cannot be acquainted with the greatness of Allaah, His [Perfect and All-Encompassing] Power, His Perfection and His rights over His slaves, except through the path of the noble Messengers [alayhimus salaatu wassalaam]. The people can only [achieve true and sound] happiness through the [guidance, nurturing and path of the Prophets and Messengers], because Allaah favoured them with that light and guidance. And Allaah did not praise the Prophets for anything – after appointing them as Prophets and Messengers- more virtuous than knowledge. Allaah said:

And that was Our Proof which We gave Ibrahim (Abraham) against his people. We raise whom We will in degrees. Certainly your Lord is All-Wise, All-Knowing. [Surah Al-An’aam- Aayah 83]

[Through this] Knowledge of the proofs and evidences [i.e. the revelation], Allaah raised the status [of the people], and He raised the status of all the Prophets by way it.  Allaah said about Yusuf [alayhis salaam]:

And when he [Yusuf (Joseph)] attained his full manhood, We gave him wisdom and knowledge (the Prophethood), thus We reward the Muhsinun (doers of good). [Surah Yoosuf’ Aayah 22]

And when he attained his full strength, and was perfect (in manhood), We bestowed on him Hukman (Prophethood, right judgement of the affairs) and religious knowledge [of the religion of his forefathers i.e. Islamic Monotheism]. And thus do We reward the Muhsinun (i.e. good doers). [Surah Al-Qasas’ Aayah 14]

It is He Who has sent His Messenger (Muhammad) with guidance and the religion of truth (Islam), to make it superior over all religions even though the Mushrikun (polytheists, pagans, idolaters, disbelievers in the Oneness of Allah) hate (it). [Surah At-Tawbah’ Aayah 33]

Al-Hudaa [Guidance] is beneficial knowledge and Deenul Haqq [the religion of truth] is righteous action. And Allaah gave the Messenger superiority and likewise this Ummah over all religions by way of this Knowledge [i.e. the final revelation].

Allaah [The Blessed And Most High] said:

He it is Who sent among the unlettered ones a Messenger (Muhammad) from among themselves, reciting to them His Verses, purifying them (from the filth of disbelief and polytheism), and teaching them the Book (this Qur’an, Islamic laws and Islamic jurisprudence) and Al-Hikmah (As-Sunnah: legal ways, orders, acts of worship, etc. of Prophet Muhammad). And verily, they had been before in manifest error. [Al-Jumu’ah’ Aayah 2]

Allaah praised the Messenger and the Ummah due the knowledge and wisdom [given to them]; purified them [from the filth of disbelief and polytheism] and saved them Misguidance by way of it. They used to be in a state of extreme darkness – [upon acts, beliefs, ideas and manners] of the Pre-Islamic era of ignorance and Misguidance, then Allaah saved them through Muhammad and the guidance he brought, and [though] the knowledge [of the revelation] that purifies the souls and hearts.

Allaah praised the [upright religious] scholars of this Islamic Nation and the [upright scholars of the previous Nations who followed Allaah’s Messengers] due to the knowledge [of the revelation that was given to them]. Allaah did not praise them due to wealth, worldly status, authority or anything else, rather Allaah praised them due to knowledge [of the revelation], because knowledge is that which passes judgement on all affairs of life, and it is what passes judgements on both the rulers and the subjects. Allaah said:

It is only those who have knowledge among His slaves that fear Allah.