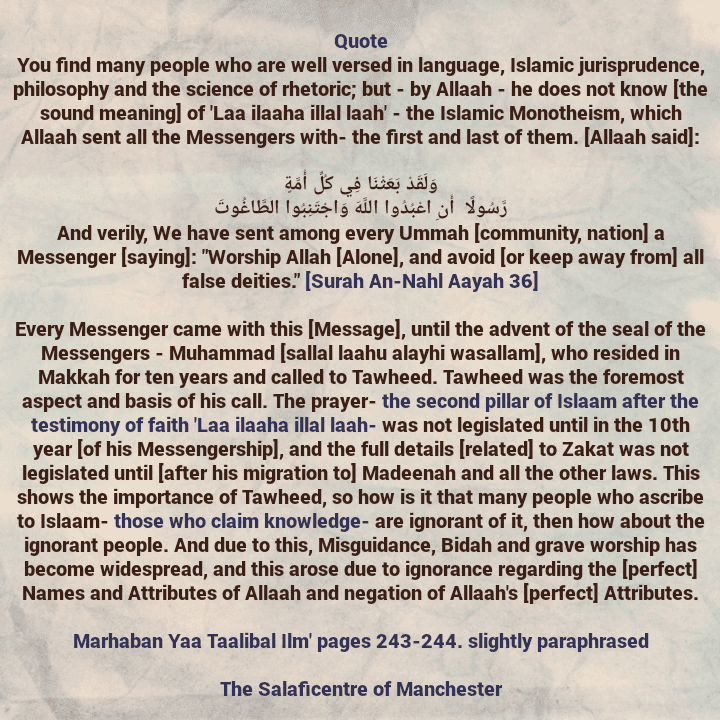 The Comprehensive Sharee’ah Understanding of the [phrase] Al-Fiqh Fid Deen [Understanding In The Religion]: “Whoever Allaah wishes good for, He grants him understanding in the religion.” When this [phrase] ‘Understanding in the religion’ is stated amongst the people, they understand it to mean the books of Islamic jurisprudence [i.e. the books that discuss the rulings related to prayer, zakat, fasting, marriage etc]. This is a deficient understanding. Fiqh [understanding] – first and foremost – is the understanding of the [sound] creed and Tawheed [i.e. sound Islamic monotheism]. This is the highest level of Fiqh, because the nobility of knowledge is [determined based on the] nobility of its subject matter. The best and noblest subject matter is Tawheed, which teaches the people about the Attributes of their Lord and the perfection of His Attributes, [informs them, explains and reminds] them about His Oneness, to worship Him [alone] and sincerely establish the [entire] religion for His Sake.

Therefore, we seek understanding of Tawheed from Allaah’s Book [i.e. the Qur’aan], the [authentic] Sunnah of Allaah’s Messenger [sallal laahu alayhi wasallam] and from the understanding of our Salafus Saaleh [i.e. the Sahaabah, the Taab’een and the At-baa at-Taabi’een]. We seek understanding in all areas of [Sharee’ah] knowledge – understanding [related to what] is halaal and haraam, acts of worship, mutual dealings, [sound Islamic politics], economics and in every affair. All these affairs – and all praise and thanks be to Allaah – are extensively [found] within the [message] brought by Muhammad [sallal laahu alayhi wasallam].

When Fiqh is mentioned, its intended [meaning includes] understanding of every affair that is connected to our religious and worldly affairs, and the foremost of them is the knowledge of Tawheed [Islamic Monotheism]. There is nothing that can do without the knowledge of Tawheed, [because] some people deeply preoccupy [themselves with other] sciences and subject matters, but he does not know this knowledge brought by the Messenger [sallal laahu alayhi wasallam], to such extent that you find many people who are well versed in language, Islamic jurisprudence, philosophy and the science of rhetoric; but – by Allaah – he does not know [the sound meaning] of ‘Laa ilaaha illal laah’ – the Islamic Monotheism, which Allaah sent all the Messengers with- the first and last of them. [Allaah said]: [وَلَقَدۡ بَعَثۡنَا فِى ڪُلِّ أُمَّةٍ۬ رَّسُولاً أَنِ ٱعۡبُدُواْ ٱللَّهَ وَٱجۡتَنِبُواْ ٱلطَّـٰغُوتَ‌ۖ – And verily, We have sent among every Ummah [community, nation] a Messenger [saying]: “Worship Allah [Alone], and avoid [or keep away from] all false deities.” [Surah An-Nahl Aayah 36]

Every Messenger came with this [Message], until the advent of the seal of the Messengers Muhammad [sallal laahu alayhi wasallam], who resided in Makkah for ten years and called to Tawheed. Tawheed was the foremost aspect and basis of his call. The prayer – the second pillar of Islaam after the testimony of faith ‘Laa ilaaha illal laah – was not legislated until in the 10th year [of his Messengership], and the full details [related to] Zakat was not legislated until [after his migration to] Madeenah and all the other laws. This shows the importance of Tawheed, so how is it that many people who ascribe to Islaam- those who claim knowledge – are ignorant of it, then how about the ignorant people. And due to this, Misguidance, Bidah and grave worship has become widespread, and this arose due to ignorance regarding the [perfect] Names and Attributes of Allaah and negation of Allaah’s [perfect] Attributes. And [also] a people from the other religions entered into Islaam and plotted against the people [through] corrupt sciences – rhetoric, philosophy, forged [or spurious] historical accounts [or events] and what is similar to that, and thus corrupted their [sound] creed and methodology.