[73] Excerpts From Shaikh Rabee’s Book Titled ‘Marhaban Yaa Taalibal Ilm – [Travel to The Scholars to Learn and Seek (Sound) Understanding, Then Return to Benefit Your Family And Your Local Community] 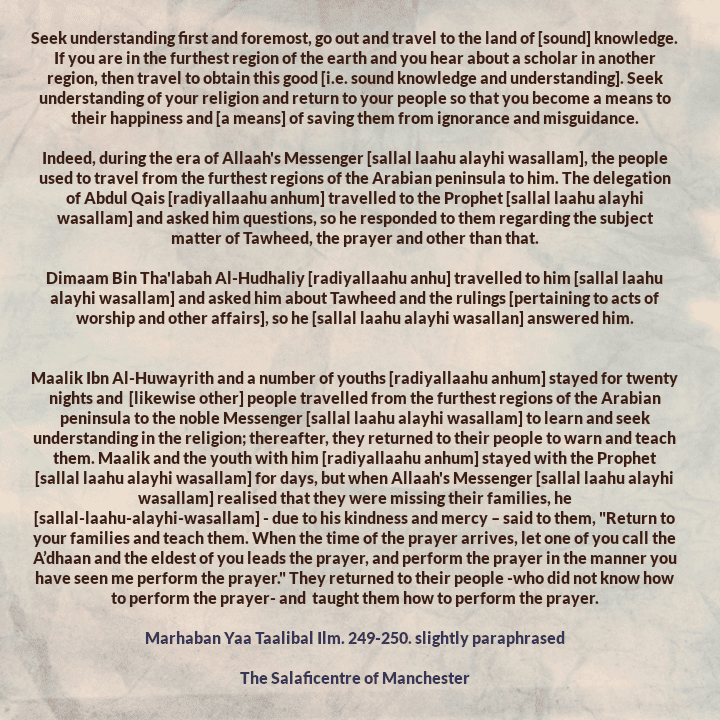 Seek understanding first and foremost, go out and travel to the land of [sound] knowledge. If you are in the furthest region of the earth and you hear about a scholar in another region, then travel to obtain this good [i.e. sound knowledge and understanding]. Seek understanding of your religion and return to your people so that you become a means to their happiness and [a means] of saving them from ignorance and misguidance.

Indeed, during the era of Allaah’s Messenger [sallal laahu alayhi wasallam], the people used to travel from the furthest regions of the Arabian peninsula to him. The delegation of Abdul Qais [radiyallaahu anhum] travelled to the Prophet [sallal laahu alayhi wasallam] and asked him questions, so he responded to them regarding the subject matter of Tawheed, the prayer and other than that.