by The Salafi Centre of Manchester | Oct 25, 2018 | Pearls of Wisdom, Purification of The Soul, Scholars of Islam 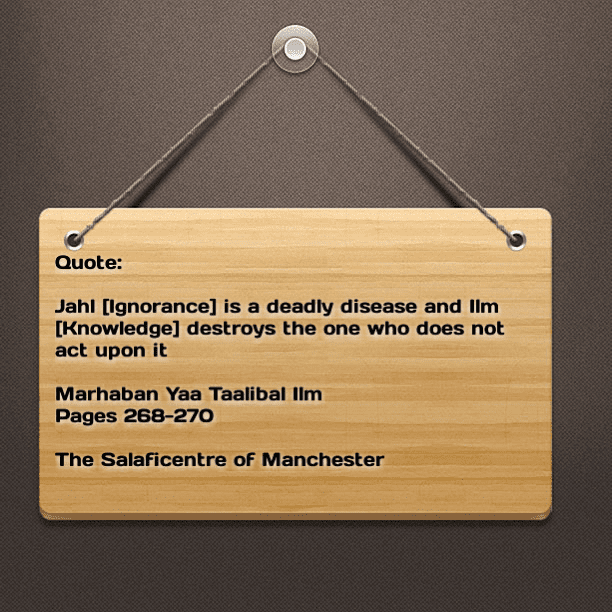 Knowledge has great status in the sight of Allaah. Those who are truthful in the path of seeking knowledge – those who are sincere and act upon what they know – will earn a great reward by way of which Allaah will raise their status [in this life and the next], and they are those who possess that fear of Allaah [founded upon sound knowledge regarding Allaah’s Greatness, Dominion and Perfect Sovereignty over everything], just as Allaah said: [إِنَّمَا يَخْشَى اللَّهَ مِنْ عِبَادِهِ الْعُلَمَاءُ – It is only those who have knowledge among His slaves that fear Allaah]. [Surah Faatir. Aayah 28]

The scholar who fears Allaah – the one who is [constantly conscious of the fact that Allah sees, hears and knows everything about him] – will act upon what he knows, seek after Allaah’s pleasure and keep away from what angers Allaah. He knows what pleases Allaah [The Mighty and Majestic] and what angers Allaah.

Indeed, Allaah and His Messenger praised knowledge and the scholars, and the Messenger [sallal laahu alayhi wasallam] informed us that the scholars are the inheritors of the Prophets; however, not every scholar is an inheritor of the prophets; rather one has to be sincere in the path of knowledge, implement knowledge, act upon it and spread it amongst the people. So, he rectifies himself through this knowledge and rectifies others. If he does not act, knowledge will be a tool of corruption and destruction, and Allaah’s refuge is sought. And because of this, Allaah dispraised the one who does not act upon the knowledge he has acquired and promises him the severest punishment. Allaah said:

O you who believe! Verily, there are many of the (Jewish) rabbis and the (Christian) monks who devour the wealth of mankind in falsehood, and hinder (them) from the Way of Allah (i.e. Allah’s Religion of Islamic Monotheism). And those who hoard up gold and silver [Al-Kanz: the money, the Zakat of which has not been paid], and spend it not in the Way of Allah, -announce unto them a painful torment. [Surah at-Tawbah. Aayah 34]

One of the most hateful [deeds] is that one speaks and gives admonition based on knowledge, but he does not act. Allaah said:

Has not the time come for the hearts of those who believe (in the Oneness of Allah – Islamic Monotheism) to be affected by Allah’s Reminder (this Qur’an), and that which has been revealed of the truth, lest they become as those who received the Scripture [the Taurat (Torah) and the Injeel (Gospel)] before (i.e. Jews and Christians), and the term was prolonged for them and so their hearts were hardened? And many of them were Fasiqun (rebellious, disobedient to Allah). [Suarah Al-Hadeed. Aayah 16]

It is obligated on the Islamic Ummah to avoid the path of these misguided ones amongst the people of the scripture – those who acquired knowledge but did not act, so their hearts became corrupt and the majority of them became rebellious, disobedient. That is because not acting on knowledge leads to hardness of the heart. And when this hardness afflicts the heart, it destroys it and thus neither does the heart accept truth nor act upon knowledge. It leads to concealment of knowledge, acting contrary to knowledge, leads [the person to] follow desires and rejects truth that is a clear as the sun.

This is found in this Ummah, just as the Prophet [alayhis salaatu wassalaam] said: ‘’The best of the people are those living in my generation, then those who will follow the latter and then those who come after them. Then there will come after them people who will be treacherous and will not be trustworthy, they will bear witness without being asked to do so [Ref 1], and they will vow, but will never fulfil their vows, and fatness will appear among them.’’ [Ref 2].

They give false testimony, act treacherously and deceitfully. They behave a very sinful manner and follow evil desires, except those whom Allaah safeguards amongst the Taa’ifatul Mansoorah [i.e. the aided group of Muslims upon the straight path] – those whom Allaah’s Messenger [alayhis salaatu wassalaam] praised. Therefore, it is obligated on us to acquire knowledge for the sake of Allaah [The Mighty and Majestic] and act upon it. Ignorance is a deadly disease and knowledge is a weapon that will destroy you if you do not act upon it, and Allaah’s refuge is sought. [Marhaban Yaa Taalibal Ilm pages 268-270]

[Ref 1: Regarding the statement, ‘’They will bear witness without being asked to do so.’’ This can mean that they bear witness before being asked, or they bear witness based on falsehood, or they give witness without being from those who are worthy of it. (For further details see Sharh Saheeh Muslim 12/17)]. However, there is another Hadeeth in which the Prophet [sallal laahu alayhi wasallam] stated: ‘’Should I not inform you about the best of witnesses, they are those who bear witness before being asked.’’ The scholars say that what is intended by this hadeeth is for example: someone has a witness to give on behalf of another person based on truth, but the person does not know about it, so he [i.e. the one who should give the witness] informs the person about it; or for example, a person has already passed away and another person knows what the deceased person has left behind as inheritance, so he bears witness to that and makes it known. [For further details see Fat-hul Baari 5/260]

[Ref 2: And regarding the statement, ‘’And fatness will appear among them.’’ – Meaning: These people give importance to the means of fattening themselves – food, drink and over-abundance. So, their only concern is their bodies and fattening themselves. As for being fat without choice, then one cannot be blamed for that, just as a person cannot be blamed for being tall, short, black or white…[For further details, see Majmoo Al-Fataawaa 10/1056 -By Shaikh Uthaymeen (rahimahullaah)]