by The Salafi Centre of Manchester | Nov 11, 2018 | Morals and Manners - 'Akhlaaq', Pearls of Wisdom, Purification of The Soul, Scholars of Islam 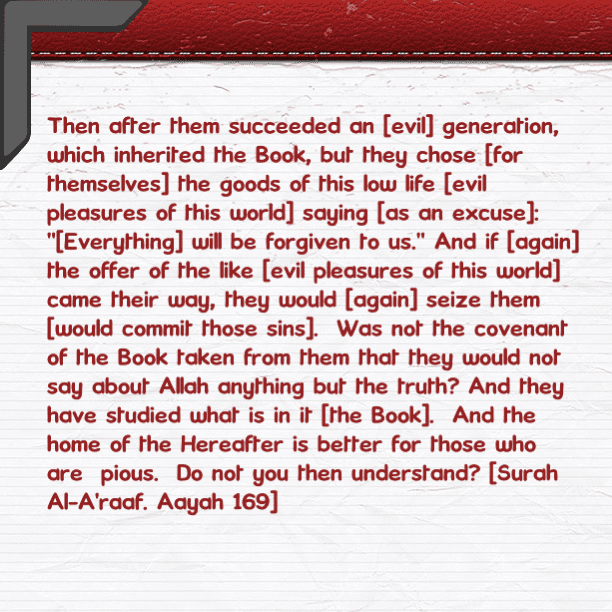 In The Name of Allaah, The Most Merciful, the Bestower of Mercy

After mentioning some of those leaders of misguidance who knew the truth but deliberately opposed it, such as the likes of Ibn Arabi At-Taa’ee and An-Nabahaaniy -both of whom were callers to major Shirk, even though they knew the truth- Shaikh Rabee [hafidhahullaah] then said: These people are evil scholars who purchased with the Aayaat [proofs, evidences, verses, lessons, signs, revelations, etc.] of Allaah a little gain [i.e. the evil pleasures], just as Alaah [The Exalted] said:

Then after them succeeded an [evil] generation, which inherited the Book, but they chose [for themselves] the goods of this low life [evil pleasures of this world] saying [as an excuse]: ‘’[Everything] will be forgiven to us.’’ And if [again] the offer of the like [evil pleasures of this world] came their way, they would [again] seize them [would commit those sins]. Was not the covenant of the Book taken from them that they would not say about Allah anything but the truth? And they have studied what is in it [the Book]. And the home of the Hereafter is better for those who are pious. Do not you then understand? [Surah Al-A’raaf. Aayah 169]

Then he says: ‘’I will be forgiven’’, whilst persisting upon falsehood. Then another worldly goal comes his way, so rushes towards it and says, “I will be forgiven.’’ This [type of behaviour is tantamount having] false hopes. Allaah [The Mighty and Majestic] accepts the repentance of a person when he repents after sinning, but these people do not [establish] a sincere repentance; rather they have false hopes. This is the state of affairs of those who inherited the Book and do not act upon it. They say that which is other than the truth and prefer the Dunyaa over the Aakhirah. This is their state of affairs and description, and they have other characteristics that have been mentioned in the Book of Allaah and the [authentic] Sunnah of the Messenger [sallal laahu alayhi wasallam].