[4] Some Terms That Might Innocently Be Utilised For Truth, But Can Also Be Utilised For Falsehood By Ahlul Bidah-[Misguided Modernists and Philosophers Disguised As Muslim Intellectuals and Islamic Thinkers]

by The Salafi Centre of Manchester | Dec 26, 2018 | Methodology - 'Manhaj', Pearls of Wisdom, Purification of The Soul 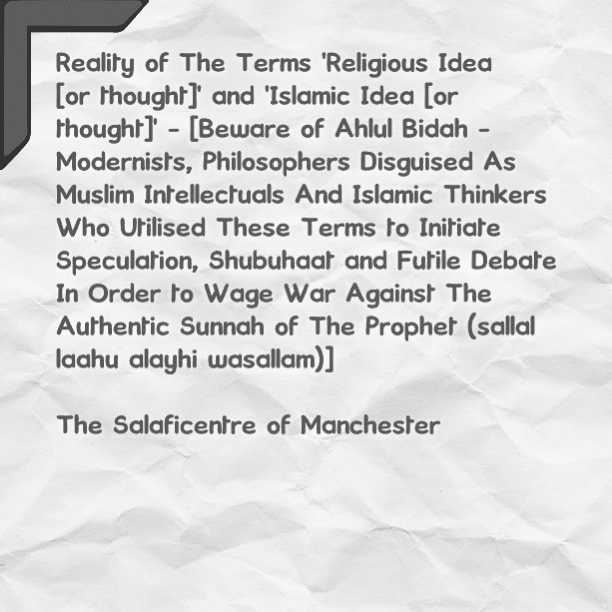 Islaam is not a set of ideas [or thoughts], rather it is a divine revelation sent down – by the Lord of universe – in the Magnificent Qur’aan and the [authentic] Sunnah of the noble Messenger [sallal laahu alayhi wasallam] – the Messenger who never speaks based on his desires, rather [إِنۡ هُوَ إِلَّا وَحۡىٌ۬ يُوحَىٰ  – It [i.e. the Qur’aan and the authentic Sunnah conveyed by the Messenger (sallal laahu alayhi wasallam) is nothing else but a revelation that is inspired]. As for an idea [or thought], it can be [rejected, disapproved etc] and debated [or presented for discussion], and it may be correct or incorrect. Therefore, it is not permissible to associate Islam with the term ‘Idea [or thought] because it [idea or thought] is something specifically attributed to the creation [i.e. humankind and Jinn], because an idea [or a thought] can either be correct or  wrong. As for the Sharee’ah [i.e. the sound divine law, creed, acts of worship conveyed by the final Messenger (sallal laahu alayhi wasallam) from the Qur’an and the authentic Sunnah], it is infallible. Likewise, it is not to be said, “Islamic idea [or thought], because the scholar who has reached the level of Ijtihaad is restricted by the pure Sharee’ah, so he is not allowed to contemplate [outside the confines of the sound divine revelation] and then legislate; rather he searches and follows the legislated Islamic path of [sound] Ijtihaad in order to derive rulings. Yes, in this era of ours the term ‘Islamic thinker’ is used and what is intended by it is a person who is able to derive [sound rulings] and spread the virtues of Islaam, therefore in this case one is excused for utilising such a term; however it is better to avoid it. [An Excerpt from ‘Mu’jam Al-Manaahiy Lil-Laf’dhiyyah’. pages 430-431. Slightly paraphrased. Publisher: Daarul Aasimah. 3rd Edition 1417 AH (1996)]