Because this contradicts the racing (to good deeds) that we mentioned to you the proofs for (earlier) and hastening towards good and mutually competing.

So for example, there is a gap in the first row (for prayer) or a place further forward behind the Imam and you and your Muslim brother are standing

so you say to him “Go ahead” and he says to you “No, you go ahead”, you say (again) “Go ahead”, so the likes of this is not appropriate because it is disliked.
Rather what is appropriate is hastening to achieving this act of drawing close (to Allaah) and that is the virtue of being in the first row.

(Another) example; a man comes and he is in need of an extra 5000* Riyaal in order to remove his poverty. And you are capable (of helping him) and likewise your Muslim brother is capable (of helping him)
so you say to him (your capable, Muslim brother), “Help him, I’m giving you the opportunity, go ahead and help him.” and he says “No, you go ahead”
(and all of this is said) from the angle of love (for one’s brother). Meaning that each person puts forward his brother, then the likes of this is also disliked, and is not appropriate. Because in this area (what is expected) is hastening and competing in actions of good.
Likewise from the angle of reading – reading (some aspect of) knowledge upon the scholars – and taking the opportunities to obtain acts of obedience and striving and what is similar to this.
So these matters are known as good deeds i.e. acts of obedience . So giving preference to others in acts of obedience, i.e. those good deeds, is not appropriate, (rather it is) disliked because – as we have mentioned – it contradicts the command with hastening, racing and mutually competing in goodness. 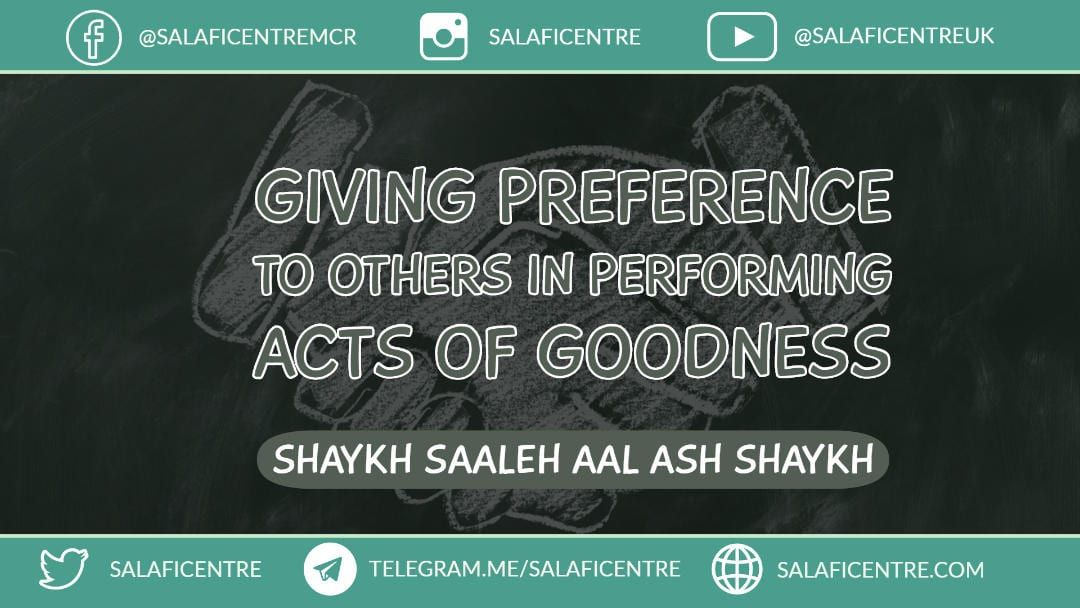