And We Made Their Hearts Firm and Strong, When They Stood Up and Said: “Our Lord is the Lord of the Heavens and The Earth 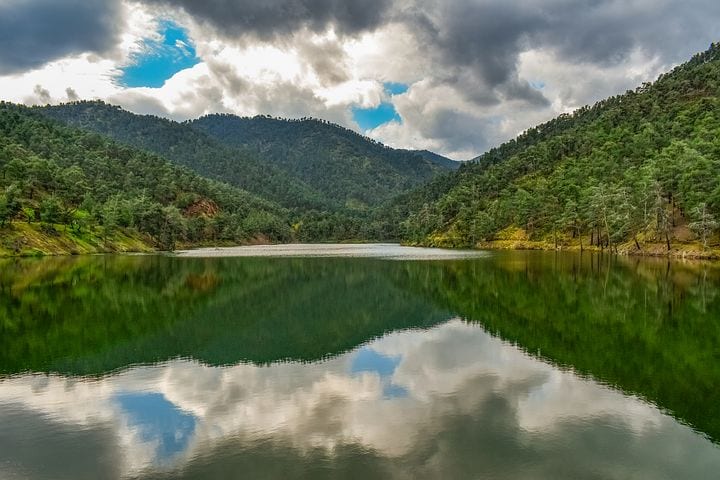 We narrate unto you (O Muhammad) their story with truth: Truly! They were young men who believed in their Lord (Allah), and We increased them in guidance. And We made their hearts firm and strong, when they stood up and said: “Our Lord is the Lord of the heavens and the earth, never shall we call upon any ilah (god) other than Him; if we did, we should indeed have uttered an enormity in disbelief.

Allaah said: [إِنَّہُمۡ فِتۡيَةٌ ءَامَنُواْ بِرَبِّهِمۡ – They were young men who believed in their Lord (Allaah)]- Meaning: They believed in the oneness of Allaah and associated none as a partner to Him, so Allaah appreciated and rewarded them for their Eemaan and increased them in guidance. Due to the basis of this guidance to Eemaan, Allaah increased them in guidance, and that necessitates beneficial knowledge and [guided to the performance of] righteous deeds, just as Allaah said [in another Aayah in the Qur’aan]: [وَيَزِيدُ اللَّهُ الَّذِينَ اهْتَدَوْا هُدًى – And Allah increases in guidance those who walk aright [true believers in the Oneness of Allah who fear Allah much (abstain from all kinds of sins and evil deeds which He has forbidden), and love Allah much (perform all kinds of good deeds which He has ordained)19:76].

Then Allaah said: [وَرَبَطۡنَا عَلَىٰ قُلُوبِهِمۡ – And We made their hearts firm and strong]- Meaning: We made them patient and steadfast, and bestowed them with tranquillity in their hearts when they were in that state of inconvenience [or unrest]. This is from Alaah’s kindness and generosity, for He granted them Eemaan, guidance, patience, steadfastness and tranquillity. [Ref 1]

[Allaah] fortified their hearts with patience and firmness; strengthened and supported [their hearts] with the light of Eemaan, so they were able to leave the land of their people, separated themselves from the comfort they were in and fled to the cave [for the safety] of their religion. [Ref 2]

Then Allaah said: [إِذۡ قَامُواْ فَقَالُواْ رَبُّنَا رَبُّ ٱلسَّمَـٰوَٲتِ وَٱلۡأَرۡضِ – when they stood up and said: “Our Lord is the Lord of the heavens and the earth]- Meaning: Allaah is the One Who created us, provided us with all blessings and provisions, the Who One controls all our affairs and nurtured us [by facilitating us with the ability and means to be guided in our religious and worldly affairs]. Allaah is the creator of the heavens and the earth – He alone created these great things. The images and idols [worshipped besides Him] can neither create nor provide anything; neither can they hurt nor benefit themselves [and others]; neither do they possess power [of causing] death nor [of giving] life, nor of raising the dead.” So, they [i.e. these youth] cited Tawheed Ar-Ruboobiyyah as evidence to establish Tawheed al-Ilaahiyyah, and for this reason Allaah said that they said: [لَن نَّدۡعُوَاْ مِن دُونِهِۦۤ إِلَـٰهً۬ا‌ۖ – never shall we call upon any ilah (god) other than Him [Allaah]- Meaning: We will not invoke anyone or anything amongst the creation; [لَّقَدۡ قُلۡنَآ إِذً۬ا شَطَطًا – if we did, we should indeed have uttered an enormity in disbelief]-Meaning: If we invoke others whilst also invoking Allaah- after knowing that Allaah alone is the true Lord and the only one who has the right to be worshipped- then indeed that would be tantamount to great misguidance from the truth and a path that is far removed from what is correct. So, they affirmed both Tawheed Ar-Ruboobiyyah and Tawheed Al-Ilaahiyyah; adhered to it, clarified that it is the truth and that what is in opposition to it is falsehood. This shows the perfection of their knowledge and awareness of their Lord and the increased guidance given to them. [Ref 3]