by The Salafi Centre of Manchester | Apr 1, 2019 | Morals and Manners - 'Akhlaaq', Purification of The Soul, Worship - 'Ibaadah' 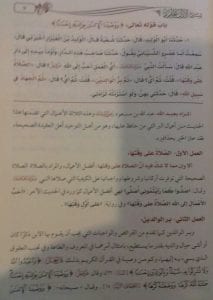 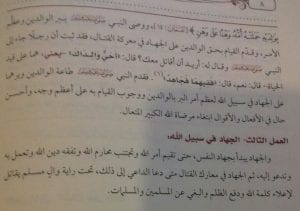 Chapter: And We have enjoined on man to be dutiful and kind to his parents

Abu Amr Ash-Shaybani said: “The owner of this house-and he pointed at the house of ‘Abdullah-said: “I asked the Prophet [sallal-laahu-alayhi-wasallam]: ‘’Which deed is most beloved to Allaah [The Mighty and Majestic]?; He said: ‘Prayer at its prescribed time. I said: Then what? He said: kindness to parents. I said: Then what?’ He said: Jihad in the path of Allaah.  He [Abdullaah] said: He told me about these things and had I asked him to tell me more, he would have told me more.

Al-Allaamah Zayd Bin Haadi Al-Madkhali [rahimahullaah] stated: The intent behind ‘Abdullaah’ is Abdullaah Ibn Mas’ood [radiyallaahu-anhu]. These three deeds [mentioned] in this hadeeth are from the deeds of piety and whoever fulfils them whilst being from the people of Tawheed and sound creed, then indeed he has acquired good in its entirety.

The first deed: Prayer at its fixed time: Indeed, there is no doubt that prayer at its prescribed time is from the most virtuous of deeds.  And the intent behind prayer is ‘the correct prayer’ whose pillars, conditions and obligations are fulfilled in accordance with the manner of the Prophet’s [sallal-laahu-alayhi-wasallam] prayer. He [sallal-laahu-alayhi-wasallam] said: ‘’Pray as you have seen me pray.’’  It is from the most virtuous deeds as it has been reported in another hadeeth: ‘’The most beloved deed to Allaah is prayer [performed] at its prescribed time.’’ And in another narration: ‘’At its earliest time.’’

The second deed: Kindness to parents: Kindness to parents is from the commands and obligations. It is obligated on a person to fulfil [it] – be  he male or female-based on one’s ability. One should fulfil the orders given by parents in what is good, obey them and refrain from disobeying them, which will lead to behaving badly towards them.  Allaah [The Most High] said:

‘’Worship Allah and join none with Him in worship.’’ [Soorah An-Nisaa: Ayah 36]

And Allaah [The Mighty and Majestic] said:

‘’And We have enjoined on man to be dutiful and kind to his parents. His mother bears him with hardship and she brings him forth with hardship’’ [Soorah Al-Ahqaaf: Ayah 15]

And Allaah [Glorified be He and free is He from all imperfections] said:

So the prophet [sallal-laahu-alayhi-wasallam] gave precedence to obedience and kind treatment to parents over fighting jihaad in the path of Allaah due to the greatness of the affair and the obligation of fulfilling it in the best way- in the most perfect manner through actions and statements- in seeking Allaah’s Pleasure.

The Third deed: Jihaad in the path of Allaah [Ref 1]: Jihaad [striving] begins with one’s soul in order to fulfil the commandments of Allaah and keep away from the things He has forbidden; seeking understanding of Allaah’s Religion, acting upon it and calling to it. Then Jihaad in the battle field when the call is made for it under the banner of the Muslim ruler-fighting to make the word of Allaah [i.e. none has the right to be worshipped except Allaah] the uppermost, and repelling oppression and transgression from the male and female Muslims. [ An Excerpt from عَوْنُ الْأحَدِ الصَّمَدِ شَرْحُ الْأَدَبُ الْمُفْرَدِ pages 1/8 9. slightly paraphrased] [Your feedback is welcome to improve the content of this article. BaarakAllaahu Feekum]