by The Salafi Centre of Manchester | Apr 8, 2019 | Aqeedah (Creed & Belief), Purification of The Soul, Scholars of Islam, Worship - 'Ibaadah' 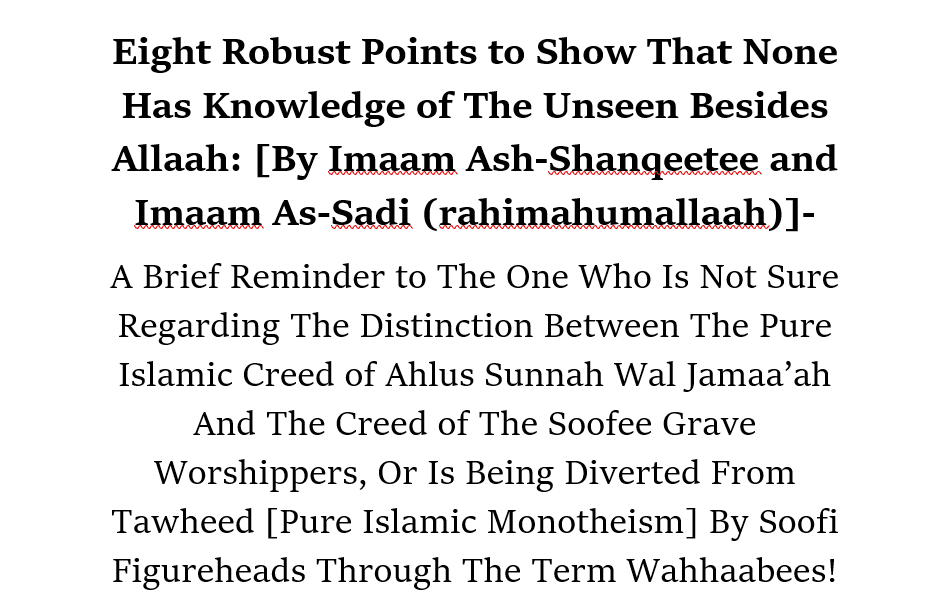 Allaah [The Most High] said: [وَعِنْدَهُ مَفَاتِحُ الْغَيْبِ لَا يَعْلَمُهَا إِلَّا هُوَ – And with Him are the keys of the Ghaib (all that is hidden), none knows them but He] [6:59]

In his explanation of the above Ayah, Imaam Ash-Shanqeetee [rahimahullaah] cited a number of robust proofs to demonstrate and establish the fact that even the most knowledgeable amongst the creation- Allaah’s Messengers and Angels-do not possess knowledge of the Unseen.

Proof 1: Aa’isha [radiyallaahu-anhaa] was falsely accused and the Prophet [sallal-laahu-alayhi-wasallam] did not know whether she was innocent or not until Allaah [The Most High] informed him, saying: [ أُولَٰئِكَ مُبَرَّءُونَ مِمَّا يَقُولُونَ- Such (good people) are innocent of (each and every) bad statement which they say] [24:26]

Proof 2: Prophet Ibraaheem [alayhis-salaam] slaughtered a lamb for the angels, whilst not knowing that they were angels until they informed him that they were angels. Allaah [The Most High] said that the angels said to Ibraaheem: [إِنَّا أُرْسِلْنَا إِلَىٰ قَوْمِ لُوطٍ    – We have been sent against the people of Lout (Lot). (11:70)]

Proof 3: When the angels came to Prophet lut [alayhis-salaam], he did not know that they were angels, and due to that Allaah said: [وَلَمَّا جَآءَتۡ رُسُلُنَا لُوطً۬ا سِىٓءَ بِہِمۡ وَضَاقَ بِہِمۡ ذَرۡعً۬ا وَقَالَ هَـٰذَا يَوۡمٌ عَصِيبٌ۬ – And when Our Messengers came to Lout (Lot), he was grieved on their account and felt himself straitened for them (lest the town people should approach them to commit sodomy with them). He said: Allaah [The Most High] also said that lut [alayhis-salaam] said: [لَوْ أَنَّ لِي بِكُمْ قُوَّةً أَوْ آوِي إِلَىٰ رُكْنٍ شَدِيدٍ  – Would that I had strength (men) to overpower you, or that I could betake myself to some powerful support (to resist you). (11:80)].

He did not know what news the angels brought until they said to him: [إِنَّا رُسُلُ رَبِّكَ لَنْ يَصِلُوا إِلَيْكَ – Verily, we are the Messengers from your Lord. They shall not reach you!] [11:81]

Proof 4: Prophet Ya’qoob [alayhis-salaam] lost his eyesight due to grieving for Yusuf [alayhis-salaam], whilst he was in Egypt. He did not know anything about Yusuf until Allaah reveal news about him.

Proof 5: Prophet Sulaymaan [alayhis-salaam], even though Allaah [The Most High] gave him authority over the devils and subjugated the wind in his service, he did not know about the people Bil-Qees until the Hud’hud came with news about them. Allaah [The Most High] said that Hud’hud said: [أَحَطْتُ بِمَا لَمْ تُحِطْ بِهِ وَجِئْتُكَ مِنْ سَبَإٍ بِنَبَإٍ يَقِينٍ  – I have grasped (the knowledge of a thing) which you have not grasped and I have come to you from Saba’ (Sheba) with true news] (27:22)]

Proof 6: Prophet Nuh [alayhis-salaam] did not know that his son – who was drowned- was not included amongst those members of his household who were to be saved, as Allaah [The Most High] said that Nuh said: [رَبِّ إِنَّ ابْنِي مِنْ أَهْلِي وَإِنَّ وَعْدَكَ الْحَقُّ   – O my Lord! Verily, my son is of my family! And certainly, Your Promise is true.(11:45)].  He did not know the reality of the affair until Allaah informed him, saying: [قَالَ يَـٰنُوحُ إِنَّهُ ۥ لَيۡسَ مِنۡ أَهۡلِكَ‌ۖ إِنَّهُ ۥ عَمَلٌ غَيۡرُ صَـٰلِحٍ۬‌ۖ فَلَا تَسۡـَٔلۡنِ مَا لَيۡسَ لَكَ بِهِۦ عِلۡمٌ‌ۖ إِنِّىٓ أَعِظُكَ أَن تَكُونَ مِنَ ٱلۡجَـٰهِلِينَ – He [Allaah] said: “O Nuh (Noah)! Surely, he is not of your family; verily, his work is unrighteous, so ask not of Me that of which you have no knowledge! I admonish you, lest you be one of the ignorant]. [11:46]

And indeed Allaah [The Most High] also stated in Surah Hud about Nuh [alayhis-salaam] that he said to his people: [وَلَا أَقُولُ لَكُمْ عِنْدِي خَزَائِنُ اللَّهِ وَلَا أَعْلَمُ الْغَيْبَ -And I do not say to you that with me are the Treasures of Allah, “Nor that I know the Ghaib (unseen)..] [11:31]

Proof 7: And when Allaah said to the Angels:  [أَنۢبِـُٔونِى بِأَسۡمَآءِ هَـٰٓؤُلَآءِ إِن كُنتُمۡ صَـٰدِقِينَ -Tell Me the names of these if you are truthful]; Allaah said that the angels replied: [قَالُوا سُبْحَانَكَ لَا عِلْمَ لَنَا إِلَّا مَا عَلَّمْتَنَا  – Glory be to You, we have no knowledge except what you have taught us]. [2:31-32]

Therefore, it is very clear that the most knowledgeable amongst the creation- the Messengers and the Angels- do not know anything of the unseen except what Allaah makes known to them. Allaah [The Most High] informs His Messengers what He wishes from the knowledge of the Unseen, as Allaah stated: [وَمَا كَانَ اللَّهُ لِيُطْلِعَكُمْ عَلَى الْغَيْبِ وَلَٰكِنَّ اللَّهَ يَجْتَبِي مِنْ رُسُلِهِ مَنْ يَشَاءُ ۖ- Nor will Allah disclose to you the secrets of the Ghaib (unseen), but Allah chooses of His Messengers whom He pleases][3:179]

Allaah [The Mighty and Majestic] said:

Then when We decreed death for him [Sulaiman (Solomon)], nothing informed them (jinns) of his death except a little worm of the earth, which kept (slowly) gnawing away at his stick, so when he fell down, the jinns saw clearly that if they had known the unseen, they would not have stayed in the humiliating torment. [Saba: Ayah: 14]

Had they [i.e. the devils] known the unseen, they would have known of Sulaymaan’s death, which was the thing they desired the most, so that they would be saved from the [state] they were in [i.e. Allaah gave Sulaymaan (alayhis-salaam) complete control over them]. [Ref 2]