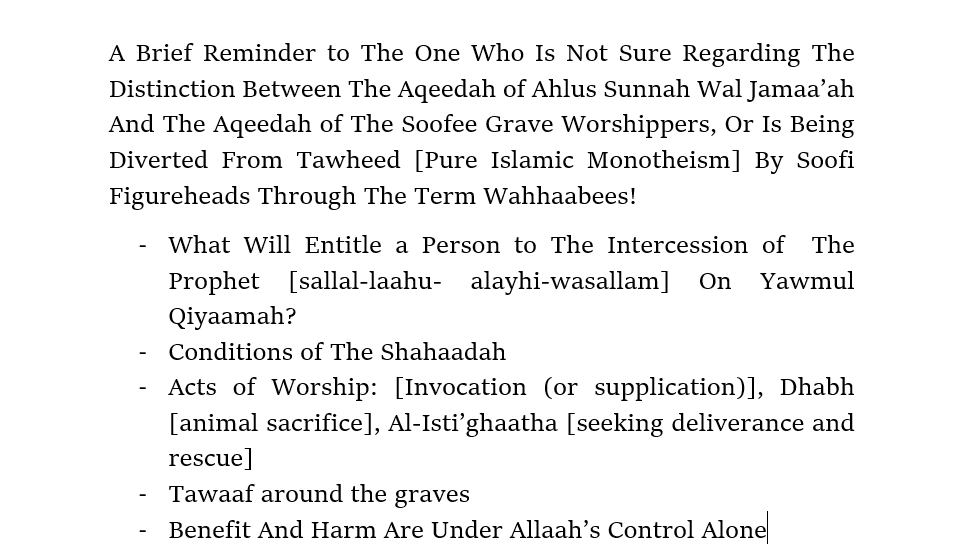 If we flee from usury, fornication and other sins, this would be considered an act of worship performed out of obedience to Allaah [The Blessed and Exalted], but- by Allaah- neither will it save us from the fire nor entitle us to the intercession of the Noble Messenger unless we [die upon] Tawheed. Abu Hurairah [radiyallaahu-ahu] asked the Messenger [sallal-laahu-alayhi-wasallam], “O Allaah’s Messenger! Who will be [happiest person-i.e. the one protected from evil and given success] to gain your intercession on the Day of Resurrection?” Allaah’s Messenger [sallal-laahu-alayhi-wasallam] said, “O Abu Hurairah! I have thought that none will ask me about it before you, as I know your eagerness to learn hadeeth. The [happiest person] who will gain my intercession on the Day of Resurrection will be the one who said sincerely from [the bottom] of his [or her] heart that ‘None has the right to be worshipped except Allaah.’” [Saheeh Al-Bukhaari’ Hadeeth Number 99]

Conditions of The Shahaadah: http://www.abukhadeejah.com/the-muslim-testimony-of-faith-shahadah-and-its-conditions-islam-2-2/

Ref 2. Du’aa [invocation/supplication]: “Your Lord says: O people, invoke Me and supplicate to Me making your worship sincerely for Me alone, and I will answer you, and pardon you and have mercy upon you. Indeed those who disdain to worship Me alone will enter Hell-Fire in disgrace.” [Soorah Ghaafir (40):60]

So the noble Aayah proves that invocation/supplication (du’aa) is worship, and if that were not the case it would not be said “those who disdain to worship Me alone….” So, whoever called upon anyone besides Allaah, the Mighty and Majestic, requesting something which none but Allaah has power over, then he is a one who worships others besides Allaah, an unbeliever, whether the one he calls upon is living or dead. [Refer this link regarding Takfeer & excuse of ignorance by Sh Fawzaan, Sh Uthaymeen and others http://www.manhaj.com/manhaj/articles/obkwf-takfir-and-the-excuse-of-ignorance-shaykh-saalih-al-fawzaan.cfm]

Whoever requests a living person for something which he is able to do, such as the saying: ‘O so and so give me food’ or ‘O so and so give me a drink,’ then there is no harm in that. But whoever asks a dead person or someone who is absent for that, then he is a one who worships others besides Allaah, since the deceased or the absent cannot possibly do that. So, in such a case his supplicating to them shows that he believes that they have some control over the creation, and he is therefore one who worships others besides Allaah.

Adh-Dhab [Animal sacrifice]: Sacrifice is to kill by spilling the blood of the animal in a particular manner, and is done for a number of reasons:

[A] That it is done as an act of worship, such that he intends by it veneration of the one for whom he sacrifices, and intends it as an act of submission to him and a means of nearness to him. So, this may not be done except for Allaah, the Most High, and has to be done in the manner which Allaah, the Most High, has prescribed. Directing it to other than Allaah is major shirk and the evidence (as mentioned by the author) is the Saying of Allaah, the Most High, “Say, O Muhammad, indeed my Prayer, my sacrifice, my living and my dying are all purely and solely for Allaah, Lord of all creation. There is no share of any of that for other than Him’ [Soorah al-An’aam (6):162-3]

[B]That it is done out of hospitality for the guest, or for as wedding feast (waleemah) or the like, then this is something commanded, either as an obligation or a recommendation, as he said “Whoever truly believes in Allaah and the Last Day, then let him treat the guest honourably” [Reported by al-Bukhaaree (Eng. transl. 8/99/no. 156) and Muslim (Eng. transl. 3/935/no. 4286)]. He [sallal-laahu-alayhi-wasallam] said to ‘Abdur-Rahmaan ibn ‘Auf, “Give a wedding, feast (waleemah) even if it is only with a single sheep” [Reported by al-Bukhaaree (Eng. transl. 7/72/no.96)].

[C]That it is done to provide food charitably, or to sell the meat and so on, then this falls under that which is permissible and is in principle according to the Saying of Allaah, the Most High, “Do those mushriks who worship others along with Allaah not see that We have created for them, from what our Hands have created, cattle which they are in charge of, and We have made the cattle subservient to them: so from them are those which they eat the meat of.” [Soorah Yaa Seen (36):71-2]

Furthermore, it may be something desirable or prohibited depending upon what it leads to.

Al-Isti’ghaatha [seeking deliverance and rescue]: Al-istighaathah is to seek rescue and deliverance from severe difficulty and destruction, and is of various types:

[A] Seeking deliverance and rescue from Allaah, the Mighty and Majestic, is one of the most excellent and most perfect deeds, and it was the continual practice of the messengers and their followers. The evidence for it is what the Shaykh [ie. Shaikh Uthaymeen ( rahimahullaah) mentioned: “When you sought aid and deliverance of your Lord and He responded to you that He was sending you a thousand angels in succession to assist you.” [Soorah al-Anfaal (8):9]

This occurred at the battle of Badr when the Prophet (sallal-laahu-alayhi-wasallam) saw the mushriks numbering a thousand men, whist his companions were a few more than three hundred and ten. So he entered the palm grove calling earnestly upon his Lord, the Mighty and Majestic, raising up his hands and facing the qiblah, and saying: “O Allaah fulfil that which You have promised me. O Allaah if this small group who are the people of lslaam are destroyed you will not be worshipped upon the earth.” Then he continued calling upon his Lord earnestly, with his hands raised such that his cloak fell from his shoulders. So Aboo Bakr, radiyallaahu ‘anhu, took up his cloak and cast it back upon his shoulders and embraced him from behind and said: “O Prophet of Allaah, your earnest supplication to your Lord will be sufficient for you since he will fulfil what He has promised you,” so this Aayah was sent down. [Reported by Muslim (Eng. transl. 3/960/no.4360)]

[B] Seeking rescue and deliverance, either from the dead or from those who are living but are not present and able to give aid and rescue, then this is shirk. This is so because it will not be done except by one who believes that those people have some unseen control over the creation, and they have therefore attributed to them a share of the Lordship that is for Allaah, the Most High, alone. Allaah, the Most High, says, “Or is that which you falsely worship along with Allaah better than He Who responds to the one in distress when he calls Him; who removes the harm; and who makes you to succeed those who came before you?! Is there anything that is worshipped besides Allaah that can do these things for you?! Little do you consider the greatness of Allaah and His favours upon you, and the clear proofs He has given you, so you therefore associate others in worship with Him.” [Soorah an-Naml (27):62]

[C] Seeking aid and rescue from those who are alive, aware of the situation and capable of assistance and rescue. It is permissible to seek aid and rescue from them: Allaah, the Most High, says in the story of Moosaa: “So the man who was upon the same Religion as Moosaa sought the aid of Moosaa against his enemy the copt, so Moosaa struck him forcefully and killed him.” [Soorah al-Qasas (28):15]

[D] Seeking rescue and aid from a living person who is not capable of assisting him, without believing that he has some hidden power. For example that a drowning person calls for rescue from a person who is paralysed. This is futility and is a mockery of the one whom he seeks rescue from, and is therefore prohibited for this reason. A further reason for its prohibition is that anyone who saw him seeking rescue from the paralysed man may be deceived into thinking that the paralysed man must have some hidden power enabling him to rescue people. [Source: Explanation of the three fundamental principles’ by Shaikh Uthaymeen and translated into English by Ustaadh Abu Talhah [may Allaah have mercy upon Shiakh Uthaymeen, Abu Talhah and  his wife]

Ref 4. Benefit And Harm Are Under Allaah’s Alone:

If a servant actualises Tawheed, then indeed fear of other than Allaah will be removed from his heart. His enemy will be the weakest thing to him let alone something to be feared alongside his fear of Allaah. He will fear Allaah alone (and none else).

He will find that his thoughts about his enemy, fear of his enemy and busying himself with the affair of his enemy is due to a deficiency in his [belief in] Tawheed, because had he being perfecting (his belief in) Tawheed, it would have been the uppermost thing in his mind (or his main concern) and Allaah is the One Who will protect and defend him; for indeed Allaah defends those who (truly) believe. If a person is a (true) believer Allaah will defend him based on the level (or strength of) his belief (in Allaah). Tawheed is the greatest shield and whoever embraces it will be amongst those who are safeguarded. Some of the Salaf said, “Whoever truly fears Allaah, everything will fear him; and whoever does not fear Allaah, Allaah will make him fear everything. [source: Fiqhul Ad’iyah Wal Adhkaar’ by Shaikh Abdur-Razzaaq Al-Badr (may Allaah preserve him); Pages 222-223; Sections 3 & 4; Publisher: Daar Kunooz’ 1st Ed; 1426AH (Year 2005)]