[2] Contemplation On Some Aayaat On The Subject Matter of Tawheed: [Reflection For Those Trapped In Soofiyyah and Grave Worship] 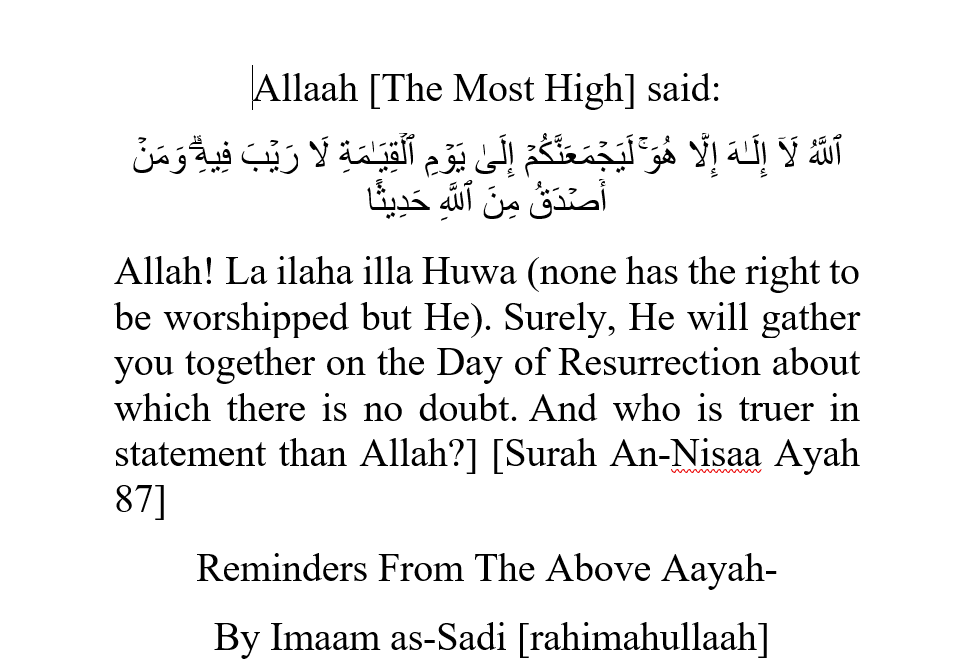 In The Name of Allaah, The Most merciful, The Bestower of Mercy

‘’Allah! La ilaha illa Huwa (none has the right to be worshipped but He). Surely, He will gather you together on the Day of Resurrection about which there is no doubt. And who is truer in statement than Allah?]’’ [Surah An-Nisaa Ayah 87]

Allaah [The Most High] informs (us) about His Oneness and that there is neither any true deity nor any true object of worship besides Him, because He [The Most High] alone is the possessor of Perfect Attributes, the Creator of everything and the One in absolute control of all the affairs of the universe.

Allaah [The Most High] is the One Who bestowed [Mankind and Jinn] both the apparent blessings [i.e. Islam, the lawful pleasures of this world, including health, good looks, etc.] and hidden blessings [i.e. One’s belief in Allah (of Islamic Monotheism), knowledge, wisdom, guidance for doing righteous deeds, and also the pleasures and delights of the Hereafter in Paradise, etc.]. All this necessitates that He alone has the right to be worshipped and obeyed through all acts of servitude to Him.

And He [The Most High] is the One Who will recompense mankind and Jinn based on what they fulfilled or neglected of this servitude to Him, and that is why He [The Most High] made an oath regarding the fact that the day of recompense will take place, saying: [لَيَجۡمَعَنَّكُمۡ إِلَىٰ يَوۡمِ ٱلۡقِيَـٰمَةِ لَا رَيۡبَ فِيهِ‌ۗ – Surely, He will gather you together on the Day of Resurrection about which there is no doubt]; Meaning: Allaah [The Most High] will gather all the early generations and later generations [amongst Mankind and Jinn] in one place, and there is no doubt about the fact that the Day of Resurrection will take place- which is confirmed by both sound intellectual proofs and divine textual proofs.

As for the sound intellectual proofs, one witnesses the fact that Allaah [The Most High] revives the earth  [i.e. gives life to vegetation] after its death, as well as the fact that Allaah [The Most High] did not create [human beings, the Jinn, and all that in the universe] without a purpose. As for the divine textual proofs [i.e. regarding the fact that Mankind and Jinn will be resurrected], He [The Most High] informs (us) that there is none truer in statements than Him; rather He made an oath regarding this affair, saying: [وَمَنۡ أَصۡدَقُ مِنَ ٱللَّهِ حَدِيثً۬ا  –  And who is truer in statement than Allah?]. He also commanded His Messenger [sallal-laahu-alayhi-wasallam] to make an oath regarding this affair [i.e. about the resurrection], saying: [زَعَمَ ٱلَّذِينَ كَفَرُوٓاْ أَن لَّن يُبۡعَثُواْ‌ۚ قُلۡ بَلَىٰ وَرَبِّى لَتُبۡعَثُنَّ ثُمَّ لَتُنَبَّؤُنَّ بِمَا عَمِلۡتُمۡ‌ۚ وَذَٲلِكَ عَلَى ٱللَّهِ يَسِيرٌ۬ – The disbelievers pretend that they will never be resurrected (for the Account). Say (O Muhammad): “Yes! By my Lord, you will certainly be resurrected, then you will be informed of (and recompensed for) what you did, and that is easy for Allah] [Surah At-Taghaabun’ Ayah 7]