[3] Contemplation On Some Aayaat On The Subject Matter of Tawheed: [Reflection For Those Trapped In Soofiyyah and Grave Worship] 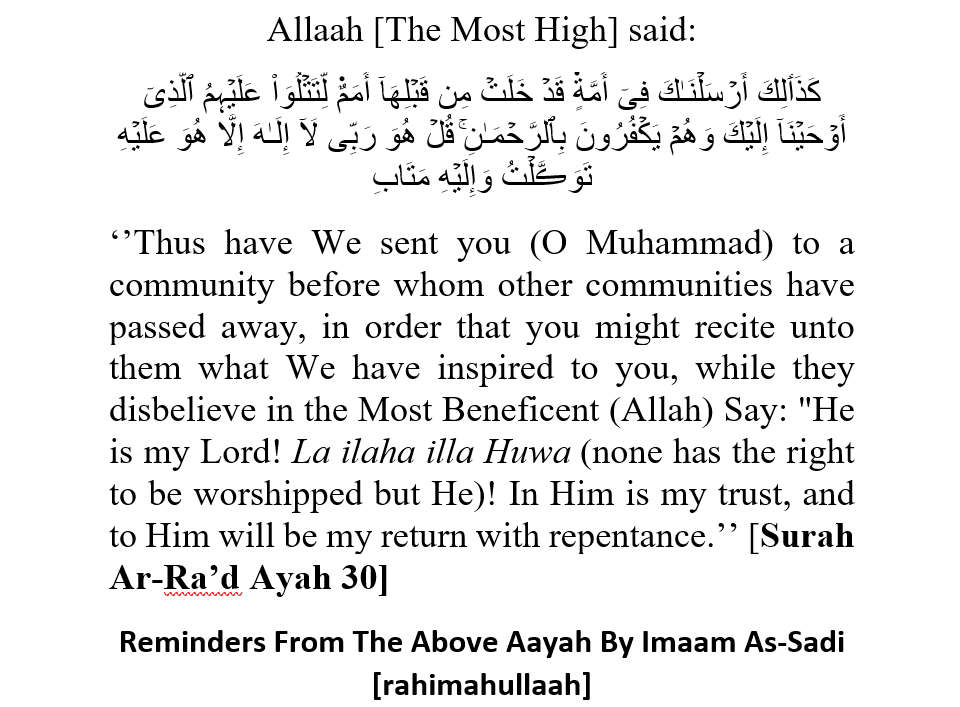 ‘’Thus have We sent you (O Muhammad) to a community before whom other communities have passed away, in order that you might recite unto them what We have inspired to you, while they disbelieve in the Most Beneficent (Allah) Say: “He is my Lord! La ilaha illa Huwa (none has the right to be worshipped but He)! In Him is my trust, and to Him will be my return with repentance.’’ [Surah Ar-Ra’d Ayah 30]

[كَذَٲلِكَ أَرۡسَلۡنَـٰكَ فِىٓ أُمَّةٍ۬- Thus have We sent you (O Muhammad) to a community]: Meaning- We sent you to a people to call them to guidance; [قَدۡ خَلَتۡ مِن قَبۡلِهَآ أُمَمٌ۬   – before whom other communities have passed away]: Meaning- We also sent our Messengers to the previous nations, therefore you [Muhammad (sallal-laahu-alayhi-wasallam] are neither a new thing among the Messengers of Allah nor the first Messenger [so they do not have any excuse] to reject your Messengership based on the assumption that you have brought something strange; nor do you say anything based on your own [opinion, view or desire]; rather you only recite [or convey] Allaah’s revelations to them, which purifies the hearts and rectify the souls. However, your people disbelieve in Ar-Rahmaan  [The Most Beneficent -Allaah] and they do not welcome His Mercy and Benevolence with acceptance and gratefulness- and the greatest of that is that He has sent a Messenger to them and revealed a Book to them – rather they turn away and reject it. Do they not ponder upon the affair of those generations who came before them – those who belied the Messengers – and the manner in which Allaah punished them due to their sins?!

[قُلۡ هُوَ رَبِّى لَآ إِلَـٰهَ إِلَّا هُوَ عَلَيۡهِ تَوَڪَّلۡتُ وَإِلَيۡهِ مَتَابِ – Say: He (Allaah) is my Lord! None has the right to be worshipped but He! In Him is my trust, and to Him will be my return with repentance]. This statement establishes two categories of Tawheed- Tawheed Ar-Ruboobiyyah [i.e. Allaah alone is the Creator of everything; He alone is the Provider and Sustainer of everything and He alone controls all the affairs of the universe], and Tawheed Al-Uloohiyyah [i.e. there is no deity worthy of worship except Allaah].

Allaah is your Lord, Who nurtured you with blessings from the time He created you, and He alone is the true deity in whom you place your trust and reliance in all affairs, and to Him you turn to – in all your acts of worship and for all your needs. [Source: (Tayseer Al-Kareem Ar-Rahmaan Fee Tafseer Kalaam Al-Mannaan). slightly paraphrased]