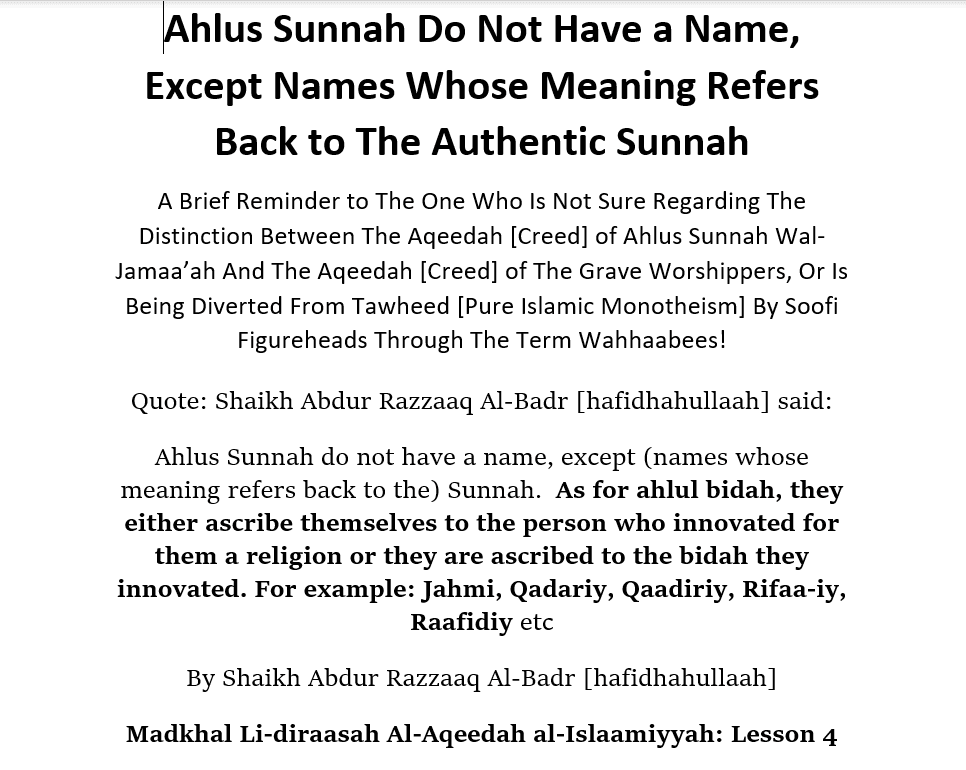 Ahlus Sunnah do not have a name, except (names whose meaning refers back to the) Sunnah.  As for ahlul bidah, they either ascribe themselves to the person who innovated for them a religion or they are ascribed to the bidah they innovated. For example: Jahmi, Qadariy, Qaadiriy, Rifaa-iy, Raafidiy etc.

Ahlus Sunnah’s ascription to the Sunnah [of the Prophet (sallal-laahu-alayhi-wasallam)] is not a mere claim, rather it is an ascription based on reality. The claims of the (people) are numerous and if they are not established with proofs, then they are mere claims. Ahlus Sunnah do not have names, except names that return back to the Sunnah, such as:

‘Ahlul Athar’ [i.e. the people who cling to the authentic narrations of the companions and their followers].

‘Ahlul Hadeeth’ [i.e. the people who follow the authentic narrations of the Prophet (sallal laahu alayhi wasallam) in every aspect of the religion and do not give precedence to any other thing over it].

Ahlul Ittibaa [i.e. the people who strictly follow the authentic Sunnah of the Prophet and the companions and they do not innovate in the religion].

Ahlus Sunnah [i.e. the people who follow exactly the authentic Sunnah and path of the Prophet (sallal laahu alayhi wasallam)  in every aspect of his life-in creed, statements, actions etc]

As-Salafiyyah [i.e. the path of the Salaf (The Pious Predecessors)- and they are the first three righteous generations of Islaam (a) Prophet and his companions; (b) then those who followed them exactly in creed, methodology and understanding in all affairs of the religion; (c) and then those who followed exactly the true followers of the companions. These are the first three generations of Islaam whom the prophet (sallal-laahu-alahi-wasallam) informed us that they are the best of generations].