[9] Contemplation On Some Aayaat On The Subject Matter of Tawheed: [Reflection For Those Trapped In Soofiyyah and Grave Worship] 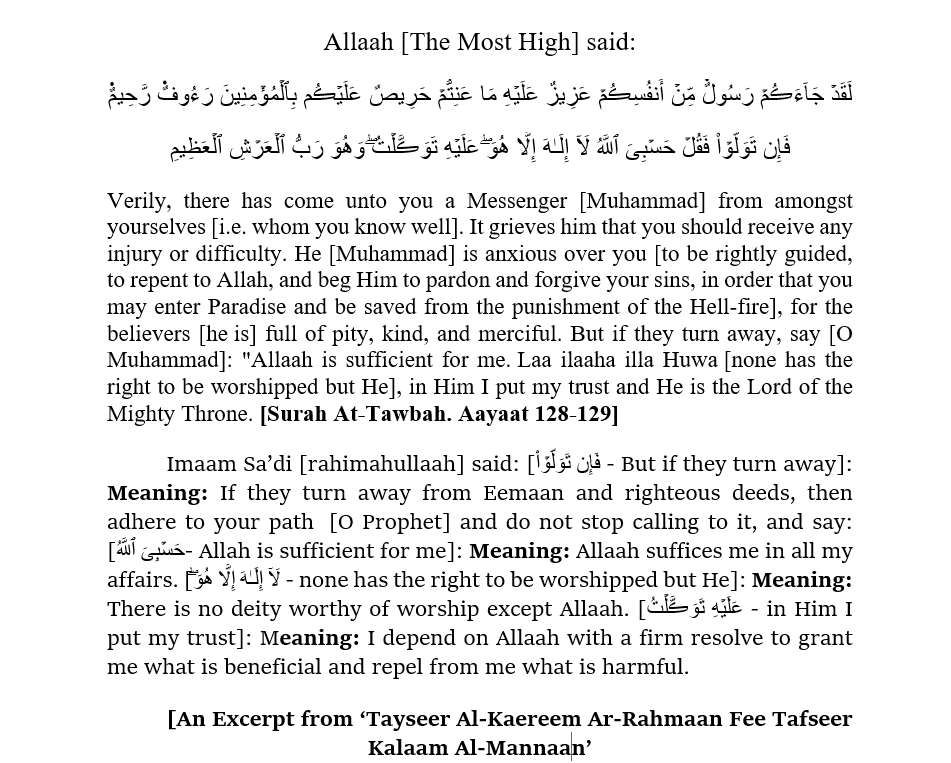 Verily, there has come unto you a Messenger [Muhammad] from amongst yourselves [i.e. whom you know well]. It grieves him that you should receive any injury or difficulty. He [Muhammad] is anxious over you [to be rightly guided, to repent to Allah, and beg Him to pardon and forgive your sins, in order that you may enter Paradise and be saved from the punishment of the Hellfire], for the believers [he is] full of pity, kind, and merciful. But if they turn away, say [O Muhammad]: “Allaah is sufficient for me. Laa ilaha illa Huwa [none has the right to be worshipped but He], in Him I put my trust and He is the Lord of the Mighty Throne. [Surah At-Tawbah. Aayaat 128-129]

Allaah [The Most High] has favoured His believing servants by sending the unlettered Prophet from amongst themselves. They know his state of affairs and are able to accept what he says and submit wholeheartedly. He gives them tremendous  sincere advice and hastens to that which will bring about well-being for them [in this life and the next].

[عَزِيزٌ عَلَيۡهِ مَا عَنِتُّمۡ- It grieves him that you should receive any injury or difficulty]: Meaning: He is troubled when you are troubled. [حَرِيصٌ عَلَيۡڪُم- anxious over you]: Meaning: He wants good for you and strives hard to make you accomplish that. He is eager for you to be guided to Eemaan, hates that evil should come to you and strives his utmost to turn you away from it. [بِٱلۡمُؤۡمِنِينَ رَءُوفٌ۬ رَّحِيمٌ۬ – for the believers (he is) full of pity, kind, and merciful]: Meaning: He loves you dearly and has a lot of mercy for you-more merciful to you than your parents. And due to this, his rights take precedence over the rights of all the creation. It is obligated on the Ummah to believe in him, exalt, honour and assist him [i.e. in the manner legislated by Allaah – neither exceeding the limits nor become lackadaisical]. If the people believe in the Prophet, then that would be their good share and well-being [in this life and the next]; [فَإِن تَوَلَّوۡاْ – But if they turn away]: Meaning: If they turn away from Eemaan and righteous deeds, then adhere to your path  [O Prophet] and do not stop calling to it, and say: [حَسۡبِىَ ٱللَّهُ- Allah is sufficient for me]: Meaning: Allaah suffices me in all my affairs. [لَآ إِلَـٰهَ إِلَّا هُوَ‌ۖ – none has the right to be worshipped but He]: Meaning: There is no deity worthy of worship except Allaah. [عَلَيۡهِ تَوَڪَّلۡتُ – in Him I put my trust]: Meaning: I depend on Allaah with a firm resolve to grant me what is beneficial and repel from me what is harmful. [وَهُوَ رَبُّ ٱلۡعَرۡشِ ٱلۡعَظِيمِ – and He is the Lord of the Mighty Throne].