Glorify The Praises of Your Lord, and Ask For His Forgiveness – [Brief Reminders From Surah An-Nasr] 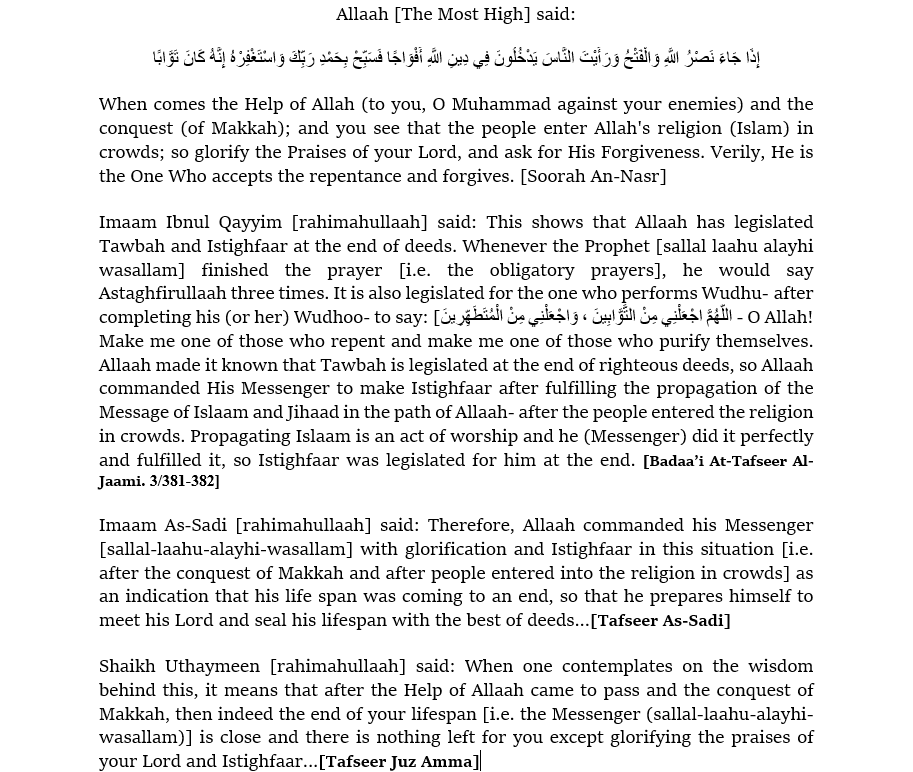 When comes the Help of Allah (to you, O Muhammad against your enemies) and the conquest (of Makkah); and you see that the people enter Allah’s religion (Islam) in crowds; so glorify the Praises of your Lord, and ask for His Forgiveness. Verily, He is the One Who accepts the repentance and forgives. [Soorah An-Nasr]

This shows that Allaah has legislated Tawbah and Istighfaar at the end of deeds. Whenever the Prophet [sallal laahu alayhi wasallam] finished the prayer [i.e. the obligatory prayers], he would say Astaghfirullaah three times. It is also legislated for the one who performs Wudhu- after completing his (or her) Wudhoo- to say: [اللَّهُمَّ اجْعَلْنِي مِنْ التَّوَّابِينَ ، وَاجْعَلْنِي مِنْ الْمُتَطَهِّرِينَ – O Allah! Make me one of those who repent and make me one of those who purify themselves (Ref A)]. Allaah made it known that Tawbah is legislated at the end of righteous deeds, so Allaah commanded His Messenger to make Istighfaar after fulfilling the propagation of the Message of Islaam and Jihaad in the path of Allaah- after the people entered the religion in crowds. Propagating Islaam is an act of worship and he (Messenger) did it perfectly and fulfilled it, so Istighfaar was legislated for him at the end. [Ref 1]

This shows that the lifespan of Allaah’s Messenger [sallal-laahu-alayhi-wasallam] was coming close to its end and that virtuous deeds, such as prayer, hajj and other deeds are concluded with Istighfaar. Therefore, Allaah commanded his Messenger [sallal-laahu-alayhi-wasallam] with glorification and Istighfaar in this situation [i.e. after the conquest of Makkah and after people entered into the religion in crowds] as an indication that his life span was coming to an end, so that he prepares himself to meet his Lord and seal his lifespan with the best of deeds… [Ref 2]

When one contemplates on the wisdom behind this, it means that after the Help of Allaah came to pass and the conquest of Makkah, then indeed the end of your lifespan [i.e. the Messenger (sallal-laahu-alayhi-wasallam)] is close and there is nothing left for you except glorifying the praises of your Lord and Istighfaar…[Ref 3] [End of quotes]

We ask Allaah (The Most Merciful) to forgive us our shortcomings and show us mercy, for indeed we can never fulfil what He has commanded in the manner it truly deserves to be fulfilled. Aameen