[19] Contemplation On Some Aayaat On The Subject Matter of Tawheed: [Reflection For Those Trapped In Soofiyyah and Grave Worship] 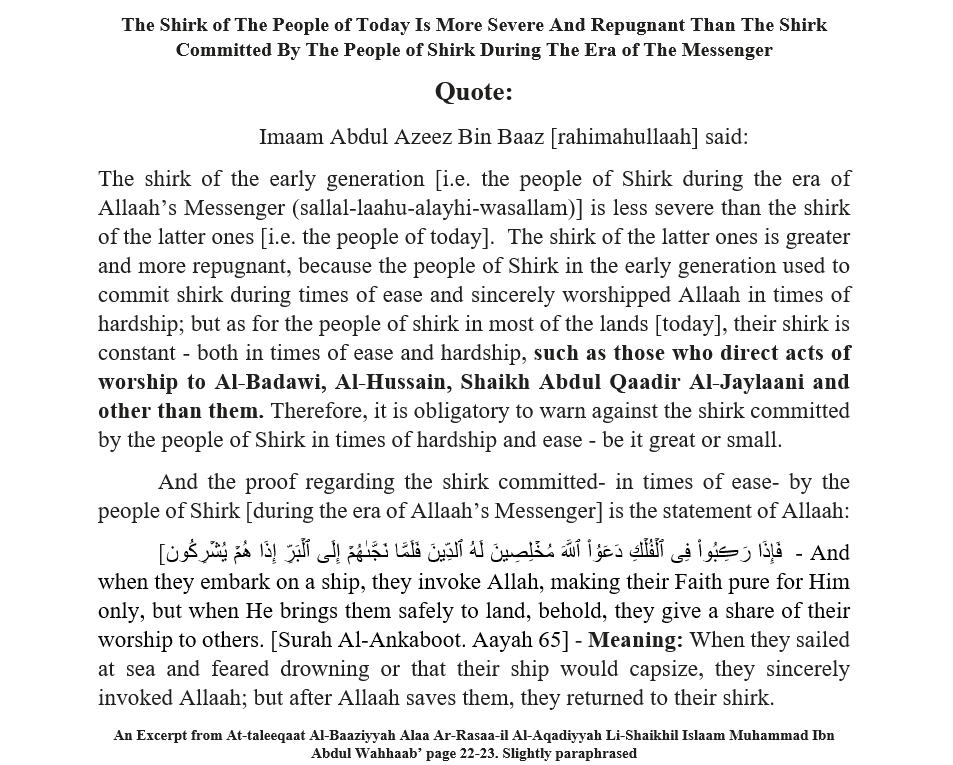 And the proofs regarding the shirk committed- in times of ease- by the people of Shirk [during the era of Allaah’s Messenger] is the statement of Allaah: [فَإِذَا رَڪِبُواْ فِى ٱلۡفُلۡكِ دَعَوُاْ ٱللَّهَ مُخۡلِصِينَ لَهُ ٱلدِّينَ فَلَمَّا نَجَّٮٰهُمۡ إِلَى ٱلۡبَرِّ إِذَا هُمۡ يُشۡرِكُون  – And when they embark on a ship, they invoke Allah, making their Faith pure for Him only, but when He brings them safely to land, behold, they give a share of their worship to others. [Surah Al-Ankaboot. Aayah 65] – Meaning: When they sailed at sea and feared drowning or that their ship would capsize, they sincerely invoked Allaah; but after Allaah saves them, they returned to their shirk.

Allaah said: [وَإِذَا مَسَّكُمُ ٱلضُّرُّ فِى ٱلۡبَحۡرِ ضَلَّ مَن تَدۡعُونَ إِلَّآ إِيَّاهُ‌ۖ فَلَمَّا نَجَّٮٰكُمۡ إِلَى ٱلۡبَرِّ أَعۡرَضۡتُمۡ‌ – And when harm touches you upon the sea, those that you invoke besides Him [Allaah] vanish from you except Him [Allah Alone]. But when He [Allaah] brings you safely to land, you turn away [from Him]. [Surah Al-Israa. Aayah 67]

Also in [another Aayah Allaah said]: [وَإِذَا غَشِيَہُم مَّوۡجٌ۬ كَٱلظُّلَلِ دَعَوُاْ ٱللَّهَ مُخۡلِصِينَ لَهُ ٱلدِّينَ – And when a wave covers them like shades (i.e. like clouds or the mountains of seawater), they invoke Allah, making their invocations for Him only. [Surah Luqmaan. Aayah 32]

This was the state of the people of Shirk in times of hardship, for they used to sincerely worship Allaah and they knew that Allaah alone is the one who will save them; however, in times of ease they fell into shirk by worshipping their false deities and idols.

As for the people of Shirk in this era [of ours], their shirk is constant and they are deprived of clear-sightedness, because they direct acts of worship to other than Allaah both in times of ease and hardship. They have no discernment due to their feeble intellects and being completely submerged in ignorance. We ask Allaah for wellbeing and safety.