Evil Effects of Sins In This Dunyaa And Aakhirah, And The Excellent Outcomes of Tawheed and Repentance 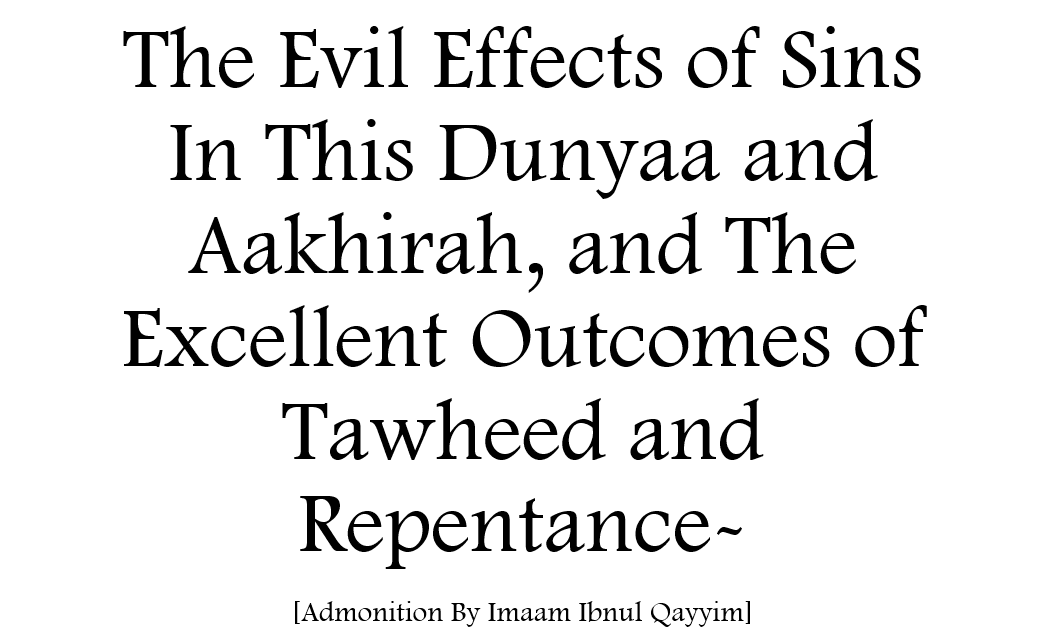 Disobedience is the cause of being in shaytaan’s captivity and a prisoner of lowly desires. A disobedient person is always in the captivity of his devil, the prison of his lusts and leadership of his desires. He is a captive and a shackled prisoner. There is neither a captive whose state of affairs is more evil than that of a captive whose captor is his worst enemy, nor is there a prison more restricted than the prison of desires, and shackles that are more restrictive than the shackles of lust; so how can a heart that is a captive and a shackled prisoner follow the path to Allaah and the home of the afterlife? How can he follow a single path when the heart is shackled and stricken with harm from every angle as a result of the [severity] of its shackles? The likeness of the heart is that of a bird; it distances from harm whenever it flies high and surrounded by harm whenever it lands. It is reported in a hadeeth: ‘’Shaytaan is a wolf to a human being.’’

And just as an unprotected sheep in the midst of wolves is quickly destroyed, likewise if there is no protection from Allaah for the slave, it is inevitable that his wolf will prey on him. He is protected by Allaah through Taqwaah. Taqwaah is a shield and shelter from Allaah between the person and his wolf; just as it is a shield against punishment in this life and the afterlife. Whenever the sheep is closer to its shepherd, it is safer from the wolf and whenever it is distanced from the shepherd, it comes closer to being destroyed. So the sheep is more protected when it is closer to the shepherd, for the wolf only takes away the [sheep, cattle]  that are distanced and far away from the shepherd.

Sin and disobedience is something common in all the nations. It is something that has not cease to exist in the world amongst the Children of Aadam regardless of their different social classes- the common people, the ignorant ones, [the zuhhaad – those who choose to abstain from some of the lawful pleasures of the worldly life which one can do without], those desirous of it [i.e. the pleasures], the leaders and those under their rule.  This affair of [sin and disobedience] is not something specific to this Ummah of Muhammad [sallal laahu alayhi wasallam], such that [the Ummah] and its Prophet are [singled out] with rebuked as a result of that. Sin and disobedience does not negate belief in the Messengers, because it is possible for them to exist alongside belief in the Messengers. And although disobedience diminishes the perfection and completeness of belief in the Messengers, however it does not negate it.

This is the right of the one who repents because repentance wipes away the sin after it [was committed]. Therefore, the one who repents from a sin is like one without that sin.  Tawheed wipes away sins, as [mentioned] in the Hadeeth Al-Qudsiy: ‘’O Son of Adam! If you were to meet Me with enough sins to fill the earth, whilst not associating anything with Me [in worship], I shall meet you with its equivalent in forgiveness.’’  Therefore, strong Tawheed wipes away the sins of the Muslims; but if punished for their sins, they will be removed from the fire as a result of their belief in Tawheed. As for the people of shirk and the disbelievers, their good deeds are nullified as result of the disbelief and shirk they are upon.  They will neither meet their Lord with good deeds in order to obtain safety nor will they be forgiven any of their sins. Allaah [Glorified be He] said: [إِنَّ ٱللَّهَ لَا يَغۡفِرُ أَن يُشۡرَكَ بِهِۦ وَيَغۡفِرُ مَا دُونَ ذَٲلِكَ لِمَن يَشَآءُ‌ۚ  – Verily, Allaah does not forgive (a person) the sin of associating partners with Him in worship (i.e. if one dies in that state without repentance),  but He (Allaah) forgives (sins that are) lesser than that (i.e. lesser than shirk) to whom He pleases]. [4:48]

Allaah [The Most High] said: [ وَقَدِمۡنَآ إِلَىٰ مَا عَمِلُواْ مِنۡ عَمَلٍ۬ فَجَعَلۡنَـٰهُ هَبَآءً۬ مَّنثُورًا – And We shall turn to whatever deeds they did, and We shall make such deeds as scattered floating particles of dust]. [25:23] [Ref 1]