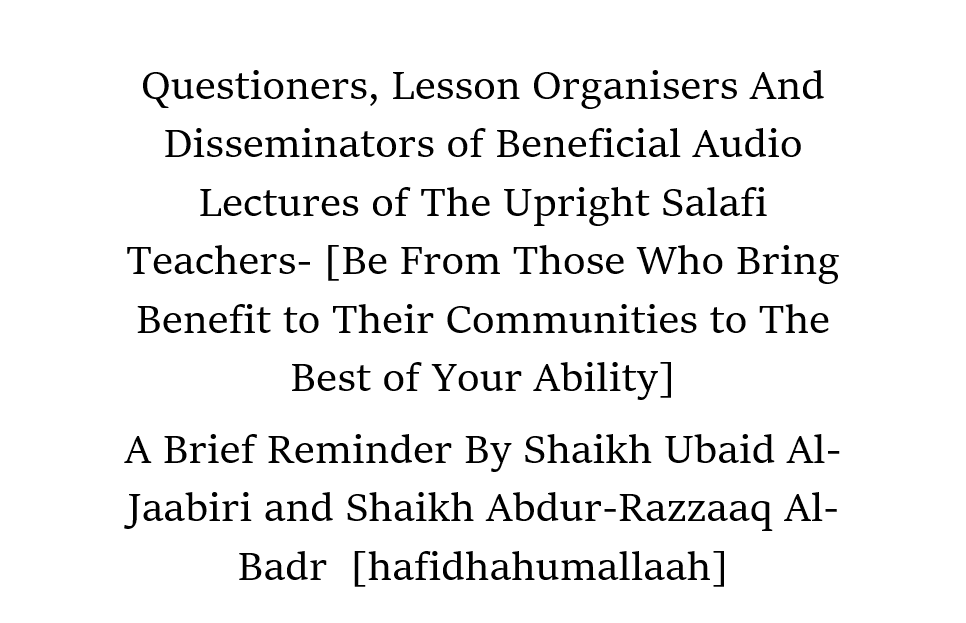 It is not a condition that a questioner can only ask about what he does not know, rather he can ask about something he knows but is not known to others; so he asks a question in order to facilitate understanding for others.

If you are in the presence of a scholar and you know that some of those present fall short in affairs related to the prayer- either lackadaisical or that they do not perform the prayer on time, or that they fall short in some of its Shuroot [conditions] and waajibaat [obligatory acts of the prayer] – so you ask a question regarding these affairs even though you know the answer; you ask in order to benefit those who are present and so that they are facilitated with understand in their religion. These types of questions are very beneficial as opposed to questions that are not correct – that is because some people ask questions in order to confuse those present and bring about doubts etc.  A question cannot be beneficial unless the questioner intends to benefit himself and others.

When Jibreel [alayhis-salaam] came to the Messenger [sallal-laahu-alayhi-wasallam] he did not appear as a teacher, rather he asked questions, even though the Messenger described him as one who came to teach the people their religion. This shows that the one who asks a scholar a question in order that the people can learn what they do not know is rewarded like one who teaches people their religion.

A scholar teaches people directly, but the one who asks the scholar a question becomes a means for the people to learn, for the one who guides to good is like one who does the good deed.  For example if you ask a student of knowledge in your country to give lessons in your Masjid –to teach the forty hadeeth of An-Nawawi or other books of the scholars, and you inform him of the needs of the people, so he begins to teach, explain and revise etc you will receive all that reward. The one who guides to good is just like one who performs the good deed. The commoner can be a means to teaching others by asking a scholar, or by gathering other commoners to take them to the circles of knowledge, disseminating beneficial audio lectures etc. [Ref 1]

I say: I advise you; neither accept cassettes nor books except those of a person whom you know to be upon the Sunnah and a witness of that is established for him—the one well-known to be upon the Sunnah and an opposition to it is not manifested from him. This is an (abiding) general principle applied to him whilst he is alive and after his death.  The one who passed away and we regarded him to be upon the Sunnah, then in our view he is upon the Sunnah and we ask Allaah to keep him firm upon it in the afterlife [i.e. Allaah grants him firmness to answer the questions in the grave due to adherence to the Sunnah (Tawheed and following the Messenger) and resurrects him in the afterlife as a person of Sunnah] just as he was kept firm upon it whilst he was alive…aameen. This is the first affair. If the affair of a person is hidden from you–the one whose books and cassettes are famous and his fame is widespread–then ask those who are well acquainted with him and those who know about his state of affairs.  That is because neither is the Sunnah hidden nor are its people. A man’s Tazkiyah (i.e. the clear witness that he is upright upon the Sunnah) are his own actions. His Tazkiyah are his own actions that he is upon the Sunnah. It is the witness and the people mention him with it during his life and after his death.

There is none who hides behind the Sunnah– the people beguiled by him, gathered around him to learn, adhered to him, became dependent on him and accepted everything he said–except that Allaah will reveal his affair, uncover and expose his concealed state of affairs to specific individuals and to the general public, regarding what was hidden and apparent of his deception, his mixing truth with falsehood, his plots and deceitful practices.  Allaah facilitates men of virtue, intelligence, wisdom, strength and exceptional natural ability–possessors of knowledge, skill and sound understanding of the religion, through whom He (Allaah) unveils the affair of that trickster, dubious and deceitful person. [Ref 2]

[Ref 1: An excerpt from ‘Sharh of the forty hadeeth of Imaam An-Nawawi (rahimahullaah)’. Lesson number 2]