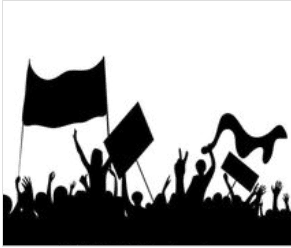 Protests [or demonstrations] are newly invented matters in the religion. Every newly invented matter in the religion is a bidah; every bidah is misguidance and every misguidance is in the hell fire [i.e. is a path leading to the hell fire]. Allaah’s legislation is perfect and complete-based on The Book and The Sunnah-and we do not know of anything by way of the evidences in the Book and the Sunnah that makes it permissible for a handful of people to gather for demonstrations, which causes disturbance for the people and time wasting. And greater than this [disturbance and time wasting] is abandonment of the prayers [during protests] and the loss of life [i.e. murder]. If one was to kill a Muslim in a single protest, the one [or those] who called to such protests will carry his sins-be it an individual, a group or those who participate. It has been reported in an authentic hadeeth: The termination of the world means less to Allah than the killing of a Muslim [i.e. without right].[a] These protests are nothing but bidah and acts of misguidance advocated by shaytaan; [enticed] by the urge of the evil soul and desires. And these enemies [i.e. shaytaan, the urge of the evil soul and desires] do not come together in any affair except that the religion and worldly affairs are destroyed, just as it is the case in these demonstrations [or protests].

The end results of protests [or demonstrations]: Carnage, destruction, wastage of wealth and time and terrorising those living in peace. And how many disadvantages are there in [that]! It is enough to be considered something sinister due to the fact that the Noble Messengers and the Great Prophets who were put to trial and harmed by their people did not hold protests [or demonstrations]. Neither did they engage in plotting to cause explosions nor committing suicide; rather Islaam has forbidden all of that.

Those who call to protests [or demonstrations] and hold that there is success in it, they are mistaken and they have missed the correct path. Rectification of the affairs can only be by way of the Book and The Sunnah in accordance with the understanding of those scholars who are firmly grounded in knowledge. So whoever calls the people to this chaos, then indeed he has brought about a means to corrupting the land and the slaves, and what has occurred – in the past and at present- is a witness to that.

Therefore, we warn the students of knowledge that they are not persuaded by the speech of those who allow protests [or demonstrations]. They say that peaceful demonstrations are permissible-as they categorise it into this categorisation- without proofs and concrete evidence from the Book and the Sunnah- neither from the actions of the Messenger and the Noble Sahaabah nor from the Notable Imaams; rather the verdict on protests [or demonstrations] is only what has been stated earlier and as well as what has been written by other than myself [i.e. protests (or demonstrations) are not permissible] [Slightly paraphrased. Source: الأفنان وتوحيد ابن خزيمة وحديث عن المظاهرات4-4-1432هـ.]

Question to Shaikh Rabee Bin Haadi [hafidhahullaah]: Going out to demonstrations, [initiating] revolutions and nurturing the youth upon it; is this from the methodology of Ahlus Sunnah Wal Jamaa’ah or not, whether [carried] out within or outside the Muslim countries? Answer: This is the methodology of Marx (i.e. Carl Marx), Lenin (i.e. Vladimir Lenin) and those similar to them. It is not from the Islamic methodology. Revolutions, bloodshed, trials and troubles are Marx’s and Lenin’s school of thought. [Source:An excerpt from كشف الستار  Page: 18]