A Valuable Thing We Must Give to Those Whom We Address With The Statement: “I Love You For The Sake of Allaah”- By Shaikh Albaani [rahmahullaah]

by The Salafi Centre of Manchester | Nov 12, 2019 | Morals and Manners - 'Akhlaaq', Pearls of Wisdom, Purification of The Soul, Worship - 'Ibaadah' 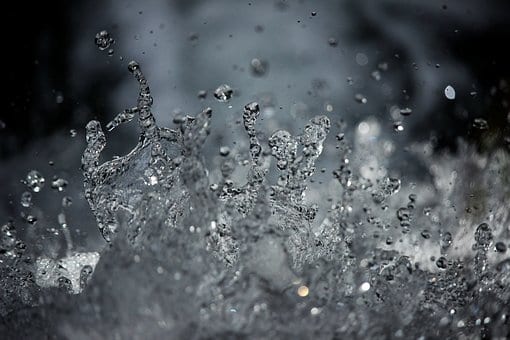 Questioner asked Shaikh Albaani [rahimahullaah]: Is it obligated on a person who loves another person to say to him, “I love you for the sake of Allaah?”

Shaikh Albaani [rahimahullaah] replied: Yes, but love for the sake of Allaah has a high value and those who give [what it necessitates] are very few!! Do you know its value? Is there anyone who knows its value? Whoever knows, then let him give us an answer?

A person in the gathering replied to the Shaikh [rahimahullaah]: The Messenger [sallal laahu alayhi wasallam] said: There are seven people whom Allaah will shade with His shade [i.e. the shade of Allaah’s Throne] …and amongst them are two men who love each other for the sake of Allaah – they meet each other and depart on that basis.

A third person said to the Shaikh [rahimahullaah]: The answer might be found in the hadeeth: There are three things that when found in a person, he will taste the sweetness of Eemaan….and one of those things is that one loves a person for nothing else other than for the sake of Allaah. Shaikh said: This is not the answer, rather this is [one of the] effects of loving for the sake of Allaah – the sweetness found in one’s heart.

A fourth person said to the Shaikh [rahimahullaah]: Allaah [The Most High] said:

The Shaikh [rahimahullaah] replied: Well done! This is the answer. If I really love you for the sake of Allaah, I will give you advice and likewise you’ll do the same for me. This act of giving advice is very rare amongst those who claim that they love each other for the sake of Allaah. It may be that there is some sincerity in their love, but it is not complete. Therefore, every one of us should safeguard the other, and -in this case- the valuable thing to be given due to loving one another for the sake of Allaah is that everyone sincerely advises one another, by enjoining good and forbidding evil – always and forever. [Ref 1]

And it has been reported that it was from the practice of the Sahaabah-amongst themselves- that when parting company from each other after meeting, one of them would recite Surah Asr to the other [Ref 2]. 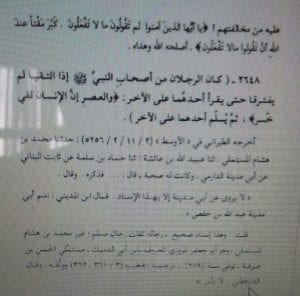 When two men among the Sahaabah of the Prophet [sallal-laahu-alayhi-wasallam] met, they would not depart until one of them recited to the other: “By al‑‘Asr (the time). Verily, man is in loss”[Surah al-‘Asr], and thereafter, one would give salaam to the other. Shaikh Albaani [rahimahullaah] said in As-Saheehah Number 2648, page 308: The chain of this narration is authentic.

Then on page 309, the Shaikh [rahimahullaah] said: Finnaly, we take and benefit from this that the Sahaabah used held onto this practice- the recitation of Surah Al-Asr [i.e. when two of them were about to depart from each other after meeting], because we believe that they were/are far removed from innovating an act of worship into the religion through which a person seeks to get close to Allaah, so they must have adhered to this practice due to what they were acquainted with from the Prophet [sallal-laahu-alayhi-wasalam]- either based on a statement of his, action or tacit approval. [Excerpt: abridged and paraphrased]