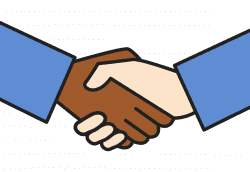 In this this hadeeth, there is a clarification [regarding the fact that] the Prophet [sallal laahu alayhi wasallam] used to sit with his companions to speak to them and make known to them that which they were in need of.

In this hadeeth, there is [proof regarding the fact that] it is obligated on the believers to love one another and establish that which is necessary to establish this love. The love legislated in the Sharee’ah is an act of worship of the heart, and there are deeds that would necessitate its existence, such as being good to the person you love, visiting the sick, following the Janaazah, giving sincere advice, enjoining good and forbidding evil, and helping him in that which is good. All these deeds and others are from that which necessitates the presence of that love that is legislated in the Sharee’ah, whose meaning is that a believing man loves another believing brother for the sake of Allaah, because he is steadfast upon Allaah’s Sharee’ah.

In this hadeeth, there is [proof to show that] it is legislated to inform someone you love for the sake of Allaah about it, saying: “Indeed, I love you for the sake of Allaah”, so that a bond is created between you and him, and he knows that he has brothers in Eemaan who love him and wish good for him just as they love good for themselves.

In this hadeeth, [there is proof to established the fact that] reward is given based on the deed, because whoever loves another person for the sake of Allaah, Allaah also will love him. And whoever Allaah loves, Allaah will honour him due to being pleased with him and enter him into Jannah- a Jannah whose width is that of the heavens and the earth.

And in this hadeeth, there is evidence to show that those who love one another for the sake of Allaah- truthful about it and visiting one another- have a lofty status in the sight of Allaah, just as it has been established in a sound hadeeth reported by Imaam Muslim [rahimahullaah] from Abu Hurairah [radiyallaahu-anhu] who said, “The Messenger of Allaah [sallal laahu alayhi wasallam] said that Allaah said, ‘Indeed Allaah will say on the day of Judgement, ‘Where are those who loved one another for my sake; I will provide them with a shade on this day in which there will be no shade except my shade [i.e. Allaah will provide them with a shade from His Throne]. [ref 1]