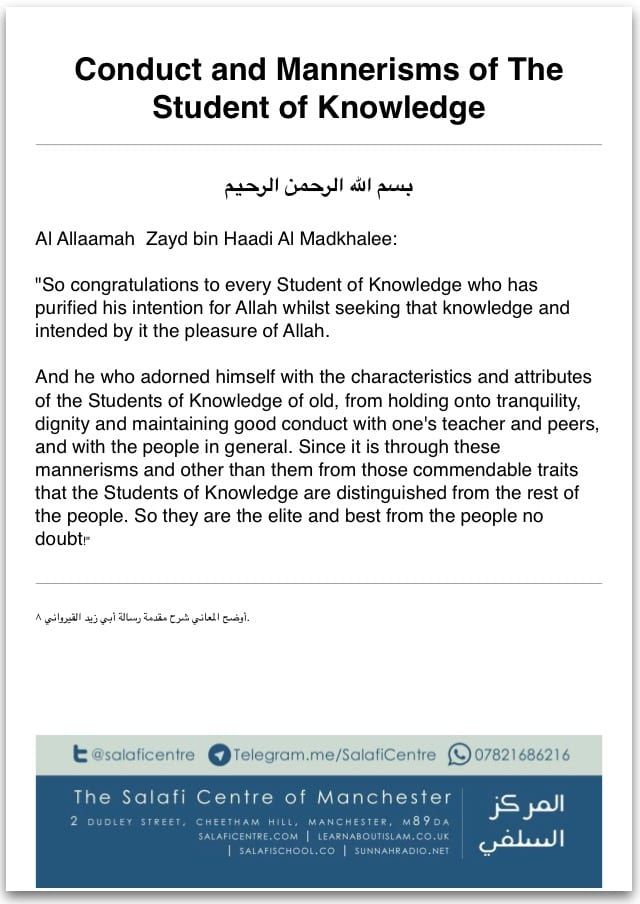 “So congratulations to every Student of Knowledge who has purified his intention for Allah whilst seeking that knowledge and intended by it the pleasure of Allah.

And he who adorned himself with the characteristics and attributes of the Students of Knowledge of old, from holding onto tranquility, dignity and maintaining good conduct with one’s teacher and peers, and with the people in general. Since it is through these mannerisms and other than them from those commendable traits that the Students of Knowledge are distinguished from the rest of the people. So they are the elite and best from the people no doubt!” 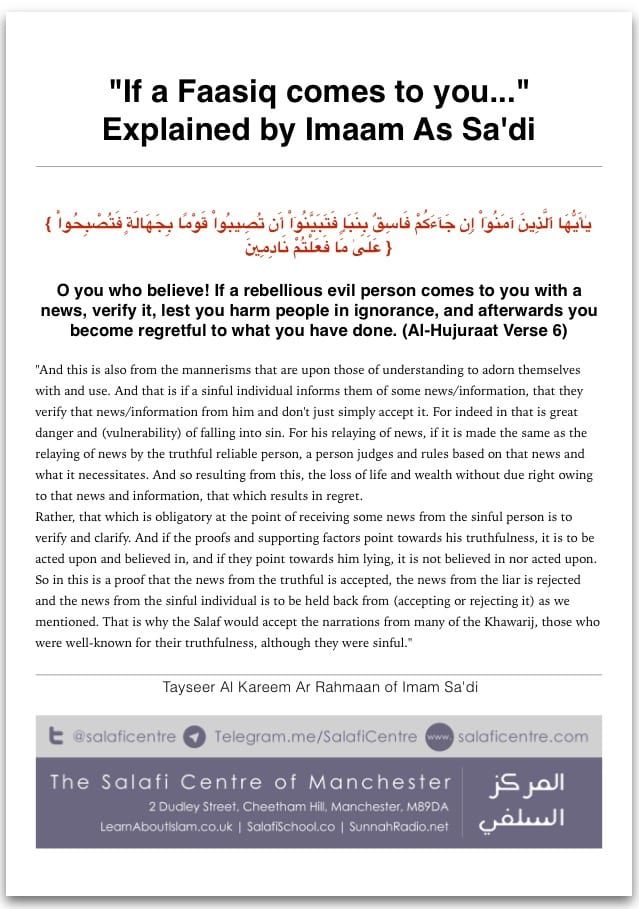 O you who believe! If a rebellious evil person comes to you with a news, verify it, lest you harm people in ignorance, and afterwards you become regretful to what you have done. (Al-Hujuraat Verse 6)

Imam As Sa’di (Rahimahullah) in explanation of this verse:

“And this is also from the mannerisms that are upon those of understanding to adorn themselves with and use. And that is if a sinful individual informs them of some news/information, that they verify that news/information from him and don’t just simply accept it. For indeed in that is great danger and (vulnerability) of falling into sin. For his relaying of news, if it is made the same as the relaying of news by the truthful reliable person, a person judges and rules based on that news and what it necessitates. And so resulting from this, the loss of life and wealth without due right owing to that news and information, that which results in regret.
Rather, that which is obligatory at the point of receiving some news from the sinful person is to verify and clarify. And if the proofs and supporting factors point towards his truthfulness, it is to be acted upon and believed in, and if they point towards him lying, it is not believed in nor acted upon.
So in this is a proof that the news from the truthful is accepted, the news from the liar is rejected and the news from the sinful individual is to be held back from (accepting or rejecting it) as we mentioned. That is why the Salaf would accept the narrations from many of the Khawarij, those who were well-known for their truthfulness, although they were sinful.”
Tayseer Al Kareem Ar Rahmaan of Imam Sa’di