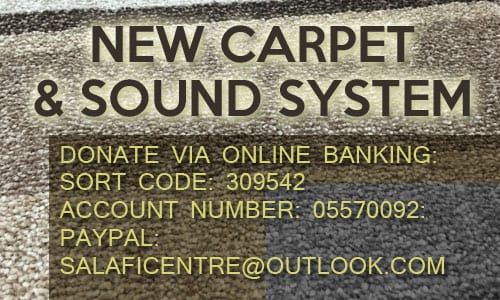 We thank and praise Allah – azza wa jal – for allowing us to reach Ramadhan and to reach these blessed last ten nights and we ask Him to allow us to truly benefit from these days and nights by increasing in our sincere worship of Him.

As many of you know Al-Markaz As-Salafi (Salafi Centre, Manchester) has been established – Wa lillaahil hamd – for over ten years, calling to the clear and upright ‘Aqeedah and Manhaj of the Salaf, without compromising ourselves or the dawah. We ask Allah for thabaat upon the truth and protection from misguidance.

The Masjid is in need of funds to replace our carpets and upgrade our sound system. For those of you who may remember the carpets were put in over ten years ago, and have been well used. Over recent years with increased congregation the carpets are now in need of replacing, the men’s and the women’s side. We also need to upgrade our sound system, we have had problems with it over the years and have tried our best to rectify, but issues still persist and the system is no longer suitable for our requirements. Alongside this we will be carrying out basic maintenance work such as painting, repairing the flooring and clearing out the area.

We are asking you in accordance to the Sunnah of the Messenger of Allah, because when the Muslims had a need he would ask the people.

Verily, those who give Sadaqat (i.e. Zakat and alms, etc.), men and women, and lend to Allah a goodly loan, it shall be increased manifold (to their credit), and theirs shall be an honourable good reward (i.e. Paradise). Sooratul Hadeed Verse 18

“Save yourself from Hell-fire even by giving half a date-fruit in charity.”
[Sahih Bukhari – Book 24 – Hadith 498]

Rush towards good deeds, free yourselves from the fire with what ever charity you are able to give, know that deeds are multiplied in this blessed month, and that giving in charity will remove your sins. The Messenger of Allah (blessings and peace of Allah be upon him) said to me:

Remember to use the reference ^