Reminder—who is sure that he/she will wake up tomorrow?!

Written by The Salafi Centre of Manchester on December 25, 2013. Posted in Uncategorized.

”It is Allah Who takes away the souls at the time of their death, and those that die not during their sleep. He keeps those (souls) for which He has ordained death and sends the rest for a term appointed. Verily, in this are signs for a people who think deeply.” [39:42]

Written by The Salafi Centre of Manchester on December 25, 2013. Posted in Uncategorized.

‘’And remind (by preaching the Qur’an, O Muhammad) for verily, the reminding profits the believers.’’ [51:55]

Written by Abdullah Jallow on December 24, 2013. Posted in Uncategorized.

Written by The Salafi Centre of Manchester on October 19, 2013. Posted in Uncategorized.

Written by Abdullah Jallow on September 7, 2013. Posted in Uncategorized.

”Being lackadaisical in refuting falsehood and gentleness towards the one who calls to it will result in the extermination of the fundamental principles of the Religion and gives authority to the enemies of Allaah—the people of shirk—over the Islamic way of life and the Religion (of Islaam).’’ [Uyoon Ar-Rasaa-il 1/441]

‘’If the scholars were to abandon defending the truth due to fear of the speech of the creation, then indeed they would have neglected a lot (of obligations) and (subjected) to humiliating fear.’’ [Al-Awaasim Wal-Qawaasim 1/223]

For Those With a Little Bit of Common Sense

Written by Abdullah Jallow on June 24, 2013. Posted in Uncategorized. 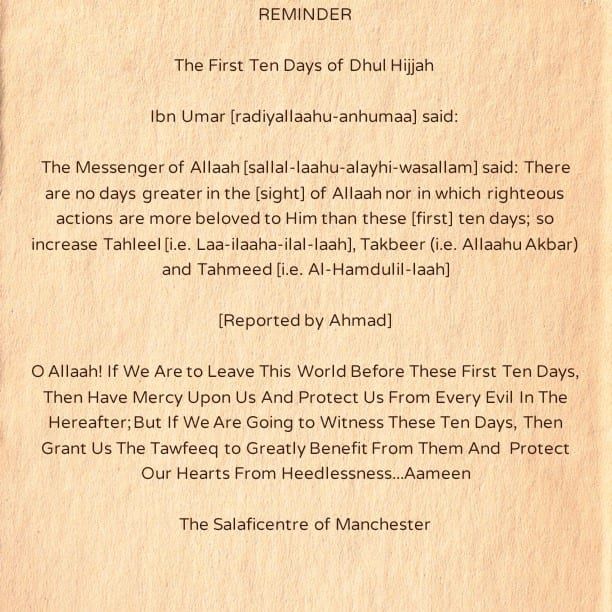 Virtue of The First Ten Days of Dhul-Hijjah

The virtues of the first ten days of Dhul Hijja

All praise is due to Allaah The Lord of the Aalameen and may the salaah and salaam be upon the leader of the Messengers.  To proceed

Allaah (The Most High) said

By the dawn; By the ten nights (i.e. the first ten days of the month of Dhul-Hijja

Imaam Ibn katheer (rahimahullaah) said that the intended meaning behind this verse is the first ten days of Dhul-Hijja as stated by Ibn Abbaas, Ibn Zubayr, Mujaahid and other than them.  And this has also been reported by Imaam Bukhaari

Allaah (The Most High) said

The Messenger of Allaah (sallal-laahu-alayhi-wasallam) said: There are no days greater in the (sight) of Allaah nor in which righteous actions are more beloved to Him than these (first) ten days; so increase Tahleel (i.e. Laa-ilaaha-ilal-laah), Takbeer (i.e. Allaahu Akbar) and Tahmeed (i.e. Al-Hamdulil-laah) [reported by Ahmad

And Saeed Ibn Jubayr who narrated the aforementioned hadeeth of Ibn Abbaas used to strive earnestly when the first ten days of Dhul-Hijja starts…. reported by Daarimee

Ibn Hajr (rahimahullaah) said in Al-Fath: What is apparent is that the reason the first ten days of Dhul Hijja are distinguished (with excellence) is because of what it gathers of the main foundational acts of worship, and they are: Salaah, Fasting, Charity and Hajj, which are not found in other them)

Salaah: Give more emphasis and concern to the obligatory prayers and increase in optional prayers, because the prayer is amongst the greatest means of seeking nearness to Allaah

Fasting: fasting is included amongst the righteous deeds.  Imaam Nawawi (rahimahullaah) said about fasting the first days of Dhul-Hijja is strongly recommended

[3] The Takbeer, Tahleel and Tahmeed due to what has been reported in the Hadeeth of Ibn Umar (radiyallaahu-anhu) that: ‘’Increase in Tahleel, Takbeer and Tahmeed in it (i.e. during these days).  Imaam Al-Bukhaari (rahimahullaah) said: Ibn Umar and Abu Hurairah (radiyallaahu-anhumaa) used to go to the market place during the first days of Dhul-Hijja whilst uttering the Takbeer and the people also used to do so alongside them

?How is the Takbeer performed

How should the Muslim approach these days of goodness

The Muslim should approach these first days of goodness with sincere repentance to Allaah, keeping away from sins and disobedience; because sins prevents a person from receiving the favours of His Lord and veils his heart from his Protector- Allaah

Likewise, a person should approach these days with all good deeds.  He should strive to benefit from them by performing deeds that are pleasing to Allaah.  Allaah (The Most High) said

As for those who strive hard in Us (Our Cause), We will surely guide them to Our Paths (i.e. Allah’s Religion – Islamic Monotheism). And verily, Allah is with the Muhsinun (good doers).” Soorah Al-Ankaboot: Ayah: 69]

O brothers and sisters in Islaam! Let us be eager to take benefit from the ten days of Dhul Hijja before they elapse and we become regretful.  We ask Allaah to benefit us and yourselves in these days of goodness; and we ask Him (The Most High) to aid us to obey Him and perform acts of worship for His sake

This article was abridged and paraphrased from an article posted in the following link:  http://www.sahab.net/forums/index.php?showtopic=132815

For more beneficial information on this topic, see the following links

Written by Abdullah Jallow on April 30, 2012. Posted in Uncategorized.