Is there an old Salafiyyah & a new Salafiyyah? Shaykh Ahmad An-Najmee -Rahimahullah

As-Salafiyyah is one Salafiyyah, and whomsoever claims that there is an old Salafiyyah and a new Salafiyyah has indeed lied. When we contemplate on the Aqeedah of the Salaf from the time of the companions until our time, we find it is one Aqeedah. They did not differ regarding it. And if they did differ it was in the subsidiary rulings which are not from the foundations (usool) and not from the Aqeedah, they differed in this (subsidiary rulings) whilst not one of them censured the other (due to the differing in subsidiary issues).

This is the path of the companions – May the pleasure of Allah the Most High be upon them.

As for the Aqeedah, the methodology with regards to it is one, from the time of the Sahaabah until now.

[2] Few Reminders from our Salaf and Imams of the Sunnah: [Strive to actualize Tawheed…]

Written by The Salafi Centre of Manchester on January 3, 2015. Posted in Aqeedah (Creed & Belief), Monotheism - Tawheed, Pearls of Wisdom, Purification of The Soul, Scholars of Islam, Worship - 'Ibaadah'.

Qataadah (rahimahullaah): Allaah’s Commands and Prohibitions are for our own benefit

Written by Abdullah Jallow on August 21, 2014. Posted in Aqeedah (Creed & Belief), Da'wah - Calling To Islam, Purification of The Soul, Scholars of Islam, The Salaf - Pious Predecessors.

”Indeed, neither did Allaah command His slaves with what He has commanded them due to being in need of them, nor did He prohibit them from what He has prohibited them out of miserliness; rather He commanded them with what is a (source) of righteousness for them and prohibited them from what is a (source) of corruption for them.”

Written by The Salafi Centre of Manchester on July 2, 2014. Posted in Aqeedah (Creed & Belief), Da'wah - Calling To Islam, Monotheism - Tawheed, Pearls of Wisdom, Purification of The Soul, Scholars of Islam.

Sincerity in religion is the basis of Justice, just as shirk (associating partners with Allaah in His Lordship, in worship and in His Names and Attributes) is great injustice.

Written by The Salafi Centre of Manchester on June 1, 2014. Posted in Aqeedah (Creed & Belief), Da'wah - Calling To Islam, Purification of The Soul, Scholars of Islam, Seeking Knowledge, Worship - 'Ibaadah'.

Written by The Salafi Centre of Manchester on May 29, 2014. Posted in Aqeedah (Creed & Belief), Monotheism - Tawheed, Morals and Manners - 'Akhlaaq', Scholars of Islam, Seeking Knowledge.

Firstly: Sin and disobedience is something common in all the nations.  It is something that has not cease to exist in the world amongst the Children of Aadam regardless of their different social classes; (be it) the common people, the ignorant ones, those who abstain from the worldly things and those desirous of it, the leaders and those under their rule.   This affair of (sin and disobedience) is not something specific to this Ummah of Muhammad, such that (the ummah) and its Prophet are censured as a result of that.

Secondly: Sins are wiped away through sincere repentance.  Allaah forgives the slave when he turns repentant to Him (Glorified Be), even if his sins fill the heavens and are of a great number.  Allaah said:

”Say: “O ‘Ibaadee (My slaves) who have transgressed against themselves (by committing evil deeds and sins)! Despair not of the Mercy of Allaah, verily Allaah forgives all sins. Truly, He is Oft-Forgiving, Most Merciful’ [39:53]

And Tawheed wipes away sins, as (mentioned) in the Hadeeth Al-Qudsiy: ‘O Son of Adam, if you were to meet Me with enough sins to fill the earth, then met Me, not associating anything with Me (in worship), I shall meet you with its equivalent in forgiveness.’

Therefore, strong Tawheed wipes away the sins of the Muslims; but if punished for their sins, they will be removed from the fire as a result of their belief in Tawheed.

As for the people of shirk and the disbelievers, their good deeds are nullified as result of the disbelief and shirk they are upon.  They will neither meet their Lord with good deeds in order to obtain safety nor will they be forgiven any of their sins.

Allaah (Glorified Be He) said:

‘Verily, Allaah forgives not that partners should be set up with him in worship, but He forgives except that (anything else) to whom He pleases’ 4:48

‘And We shall turn to whatever deeds they did, and We shall make such deeds as scattered floating particles of dust.’ [25:23]

What is Our Call (Da’wah)? Pure and Clear—by Ustaadh Abu Khadeejah 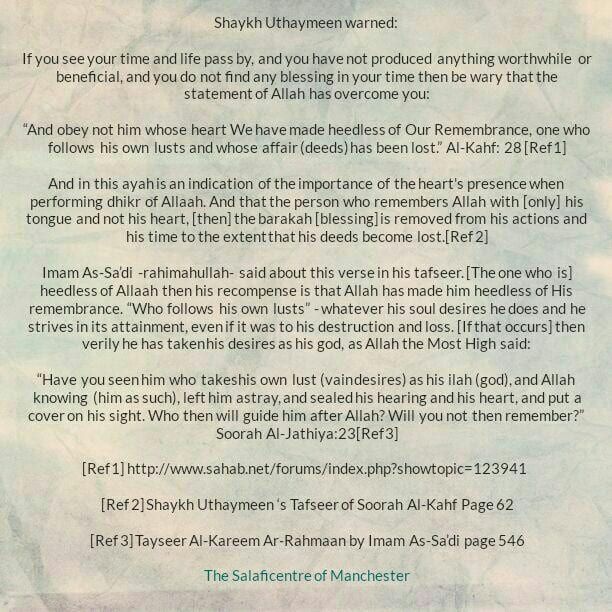 The heart does not cease….

Written by The Salafi Centre of Manchester on April 25, 2013. Posted in Da'wah - Calling To Islam, Morals and Manners - 'Akhlaaq', Pearls of Wisdom, Purification of The Soul, Scholars of Islam, Worship - 'Ibaadah'.

”The heart does not cease being put to trial until the slave makes all his religion for Allaah.” [Al-Fataawaa: 10/545]

Written by The Salafi Centre of Manchester on April 13, 2013. Posted in Brotherhood, Da'wah - Calling To Islam, Scholars of Islam, Worship - 'Ibaadah'.