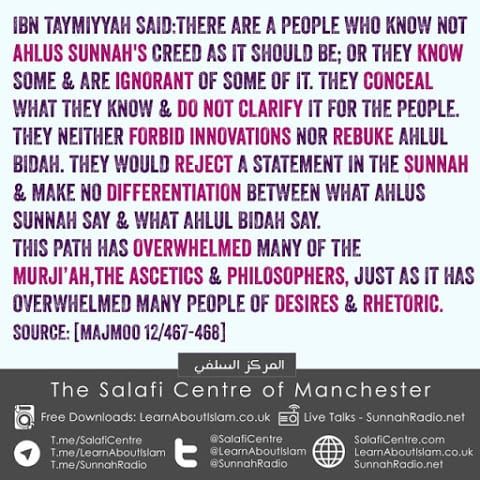 Written by The Salafi Centre of Manchester on March 22, 2017. Posted in Deviated Groups, Sects and Parties, Pearls of Wisdom, Scholars of Islam.

Ibn Taymiyyah said:There are a people who know not Ahlus Sunnah’s creed as it should be; or they know some & are ignorant of some of it. They conceal what they know & do not clarify it for the people. They neither forbid innovations nor rebuke Ahlul Bidah. They would reject a statement in the Sunnah & make no differentiation between what Ahlus Sunnah say and what Ahlul Bidah say.
This path has overwhelmed many of the Murji’ah, the ascetics & philosophers, just as it has overwhelmed many people of desires & rhetoric.
Source: [Majmoo 12/467-468]