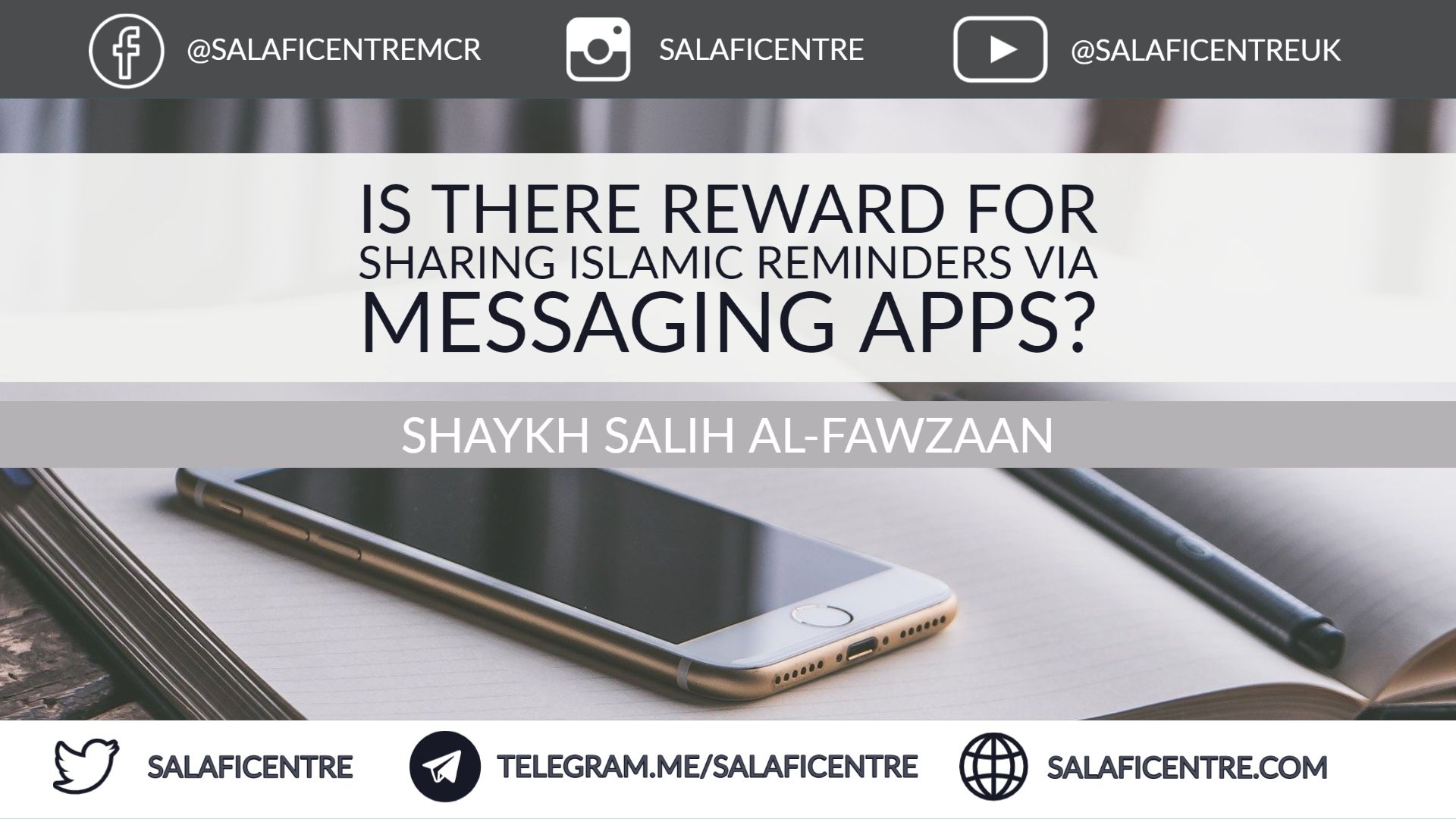 Question: Does sending religious messages on WhatsApp with the intention of teaching the people, enter into the hadith of the Prophet ﷺ ‘Convey from me, even if it is a verse’? And are we rewarded for it? 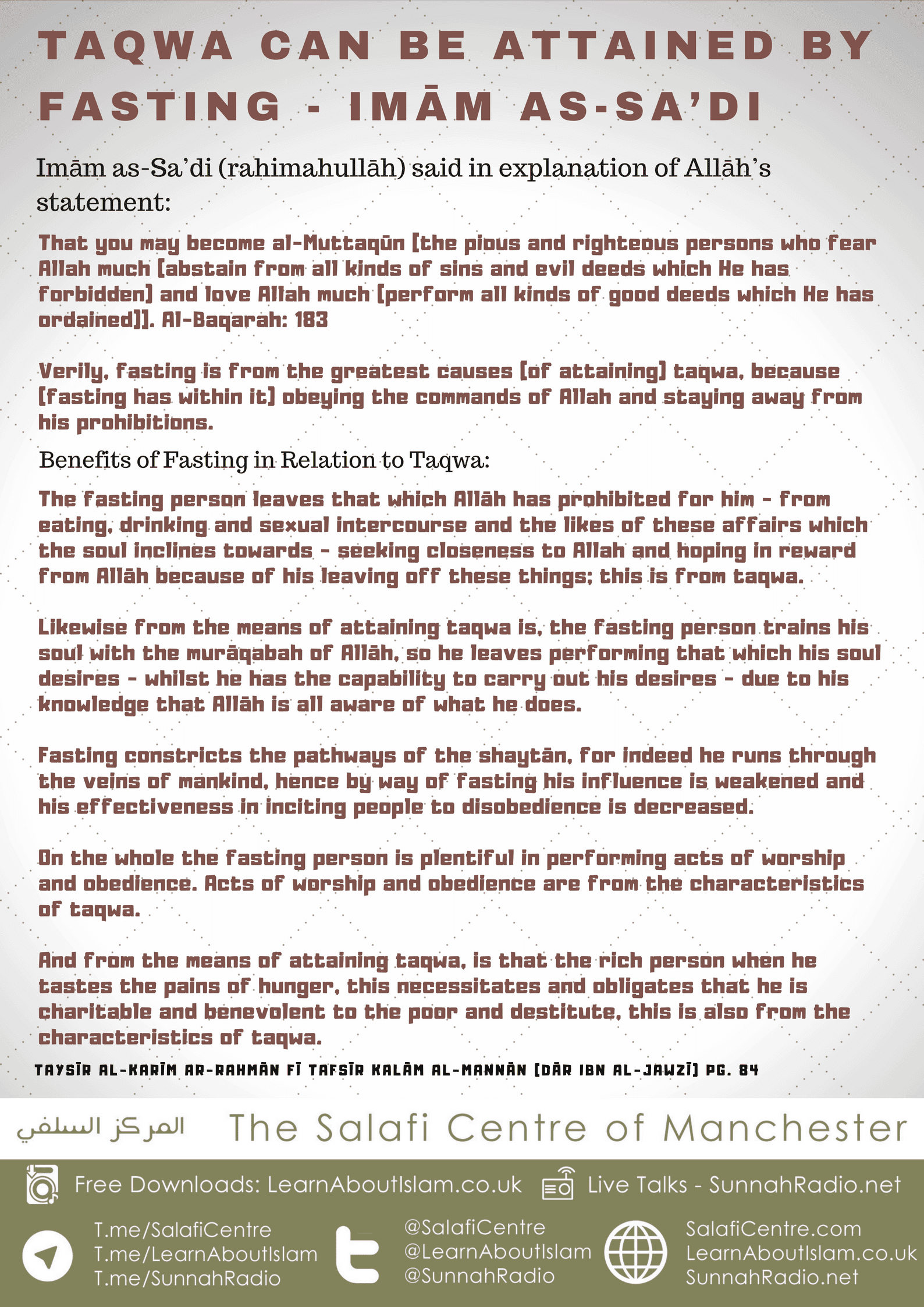 Taqwa can be Attained by Fasting – Imām as-Sa’di

Verily, fasting is from the greatest causes (of attaining) taqwa, because (fasting has within it) obeying the commands of Allah and staying away from his prohibitions.

Benefits of Fasting in Relation to Taqwa. 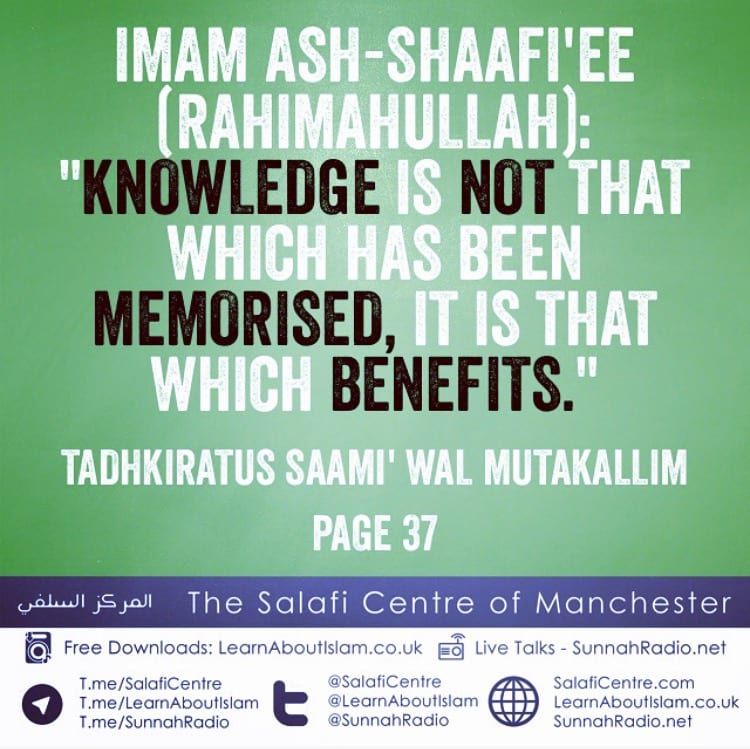 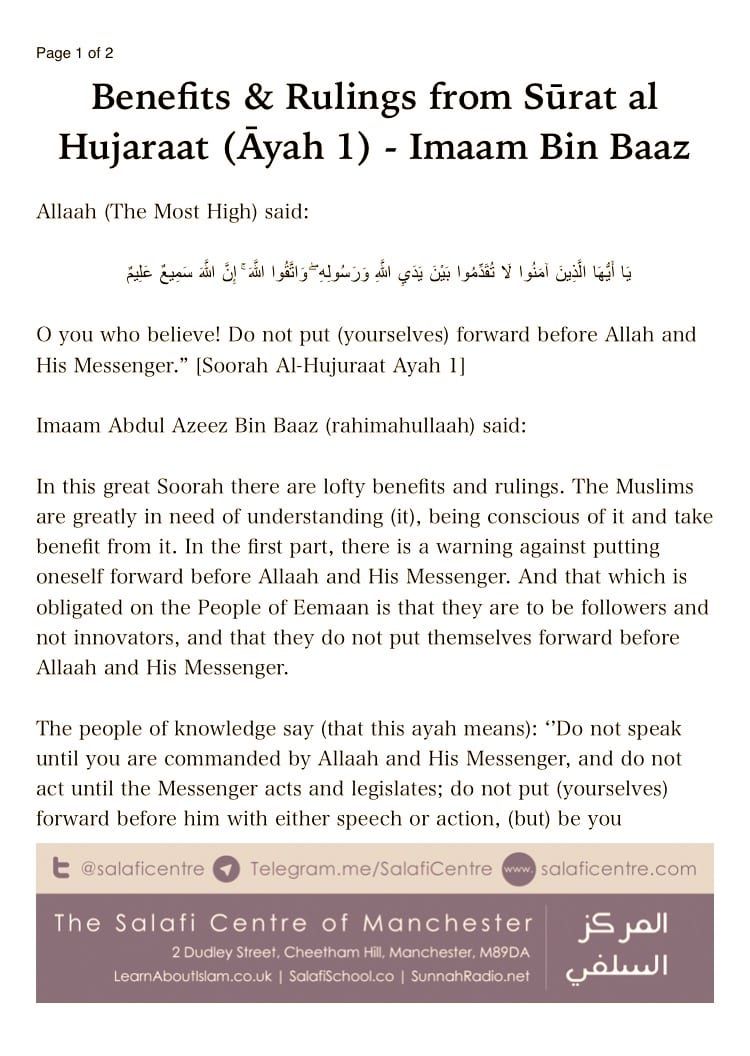 Written by The Salafi Centre of Manchester on June 13, 2016. Posted in Aqeedah (Creed & Belief), Articles, Purification of The Soul, Qur'aan, Scholars of Islam.

Some People Gather to Waste Time, Yet Wish that Sensible People Should Join Them!

Written by The Salafi Centre of Manchester on January 30, 2016. Posted in Pearls of Wisdom, Purification of The Soul.

Imaam Ibnul Qayyim (rahimahullaah) said: ”The greatest profit in the worldly life is that you preoccupy yourself- every time- with what is more worthy (or obligatory), and with what is more beneficial for (you) in the hereafter”. [Al-Fawaa’id..page 60]

Which has more benefit, dawah or seeking knowledge? – Shaykh Fawzaan

Which of the two is better? Seeking of knowledge or dawah to Allah – Glorified and Most High – because I hear some of the groups saying: “Ad-dawah (to Allah) is of greater benefit than the seeking of knowledge”

Seeking of knowledge is first because it is not possible for a person to call to Allaah except if he has knowledge. As for if he does not have knowledge then he is not able to call to Allah, and if he (does) dawah he makes mistakes much more than he is correct. So it is conditional for the caller to be upon knowledge before he commences Dawah due to the statement of Allaah:

Say (O Muhammad), “This is my way; I invite unto Allah with sure knowledge, I and whosoever follows me” (Yusuf:108)

There are (however) obvious issues where it is possible for a common person to call (to Allaah), such as commanding with the prayer and prohibiting from its abandonment, commanding with the congregational prayer (for men), commanding the children with the prayer- these affairs are known to the common person and the beginner student of knowledge. However the affairs which require understanding and knowledge of the Halal and Haraam, and the affairs of Shirk and Tawheed, then knowledge has to be acquired (regarding) these (affairs). And (generally) those who say that dawah is more beneficial than studying, they are the jamaat at-tableegh and this is a misguided innovated Sufi group.

The Importance of Marriage

Chapter: The Statement of the Prophet (sallal’laahu’alayhi’wasallam)

‘Whoever is able to marry, should marry, for that will help him lower his gaze and guard his modesty (i.e. his private parts from committing illegal sexual intercourse etc.).’ And should a person marry (even if) he has no desire for marriage?

“While I was with Abdullaah, uthman met him at Mina and said, ‘O Abu Abdur-Rahmaan! I have something to say to you.’ So both of them went aside and uthmaan said, ‘O Abu Abdur-Rahmaan! Shall we marry you to a virgin who will make you remember your past days? When Abdullaah felt that he was not in need of that, he beckoned me (to join him) saying, ‘O Alqamah’ Then I heard him saying (in reply to uthmaan), ‘As you have said that, (I tell you that) the Prophet (sallal-laahu-alayhi-wasallam) once said to us, ‘O young people! Whoever among you is able to marry, should marry, and whoever is not able to marry, is recommended to observe fast as fasting will diminish his sexual power’.

Imaam Abdul Azeez Bin Baaz (rahimahullaah) explains: “Therefore, getting married is the correct (thing to do) as an obligation upon the one who has shahwa (sexual desires) even if he is not in fear of falling to Zinaa, and this is with regards to the one whose situation allows him to get married. This (also shows) Uthman’s righteous moral conduct and that the elderly person can get married as long as he has the strength for sexual relations; and those mainly intended in this hadeeth are the young people, because in most cases they possess greater desires and are more in need of that (fulfilling their desires).” [Source: Al-Hulalul Ibreeziyyah Min At-Taleeqaat Al-baaziyyah Alaa Saheeh Al-Bukhaaree Volume 4; Hadith No:5065; Footnote Number 2]

The Importance of Marrying Someone with Deen

‘A woman is married for four (reasons/things); her wealth, her family status, her beauty and her religion. So you should take possession of the one with Religion, otherwise you will be a loser’ [Bukhaari Vol 7. No:5090]

Imaam Abdul Azeez Bin Baaz (rahimahullaah) explains: This clarifies that what matters is the religion (of a person) and not wealth and status……and all those (men) were from the Sahaabah.

“Ibn Abbaas (radiyallaahu-anhumaa) asked me, ‘Are you married?’ I replied, ‘No’ He said, ‘Marry, for the best person of this Ummah (i.e. Muhammad) had the largest number of wives.'”

Imaam Abdul Azeez Bin Baaz (rahimahullaah) explains: If a person marries (several women) in order to protect himself from (Zina) and for an increase in numbers of children; then there is no problem in this; but not for playing about.  And Shaikhul Islaam Ibn Taymiyyah stated in Majmoo Al-Fataawaa: And if the need for divorce is not called for, then the proofs necessitates that it is forbidden as demonstrated by the narrations and the fundamental principles; but Allaah has permitted divorce out of mercy from Himself due to the slaves need of it at times; and He made it forbidden in (certain) instances.  [Source: Al-Hulalul Ibreeziyyah Min At-Taleeqaat Al-baaziyyah Alaa Saheeh Al-Bukhaaree Volume 4; Hadith Number:5069. Footnote Number 3]

Imaam Abdul Azeez Bin Baaz stated: ‘In this is an encouragement to marry a virgin/virgins; for she has not been put to any trial by the people and this is more likely to (bring about) harmony between her and her husband; except when the need calls for other than that'(i.e. when a man marries other than a virgin as occurs in the story of Jaabir when he married a matron in order that she can help look after his very young sisters).

Chapter: The Marrying Of A Young Lady To An Elderly Man

Imaam Abdul Azeez Bin Baaz (rahimahullaah) explained: “(So) this shows that brotherhood for Allaah’s Sake and friendship does not prevent (a person from marrying the daughter of his friend). What is forbidden for a brother is to marry (those) relatives forbidden for him.” [Source: Al-Hulalul Ibreeziyyah Min At-Taleeqaat Al-baaziyyah Alaa Saheeh Al-Bukhaaree Volume 4; Footnote Number:1]