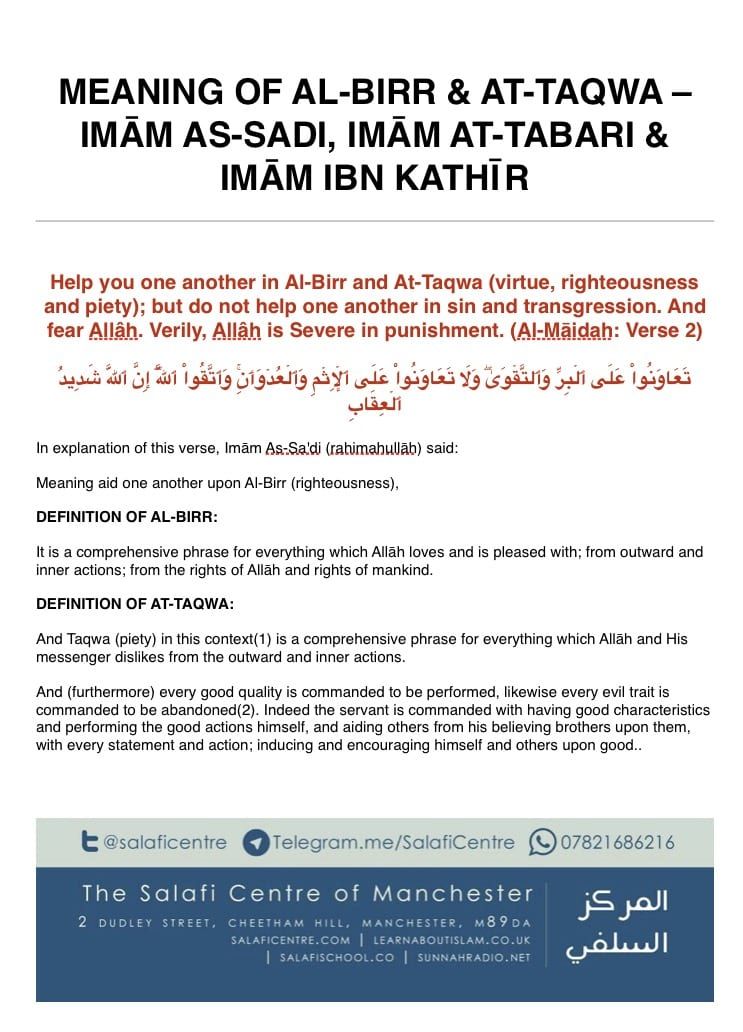 Help you one another in Al-Birr and At-Taqwa (virtue, righteousness and piety); but do not help one another in sin and transgression. And fear Allâh. Verily, Allâh is Severe in punishment. (Al-Māidah: Verse 2)

Meaning aid one another upon Al-Birr (righteousness),

It is a comprehensive phrase for everything which Allāh loves and is pleased with; from outward and inner actions; from the rights of Allāh and rights of mankind.

And Taqwa (piety) in this context(1) is a comprehensive phrase for everything which Allāh and His messenger dislikes from the outward and inner actions.

And (furthermore) every good quality is commanded to be performed, likewise every evil trait is commanded to be abandoned.(2) Indeed the servant is commanded with having good characteristics and performing the good actions himself whilst aiding others from his believing brothers upon them, with every statement and action; inducing and encouraging himself and others upon good.

When Al-Birr and At-Taqwa are mentioned together or individually:

Know that At-Taqwa is sometimes connected with Al-Birr, as is in His statement: Help you one another in Al-Birr and At-Taqwa (Al-Māidah: Verse 2). And sometimes it is mentioned by itself, so if it is connected with al-Birr, Al-Birr becomes the performance of the commandments and At-Taqwa is abandoning the prohibitions. However, if they are mentioned individually it becomes comprehensive and includes performing the commandments and avoiding the prohibitions. Verily, Allah has mentioned in His Book that paradise is prepared for the muttaqīn, therefore the people of taqwa are the people of paradise – May Allah make us and you from them – due to this it is mandatory upon the people to fear Allāh – azza wa jal – complying with His commands, seeking His reward and salvation from His punishment.(3)

(2) Similar was mentioned in Tafsīr At-Tabari of the same verse; Al-Birr is (to perform) that which you have been commanded with, and At-Taqwa is (to abandon) that which you have prohibited from. In Tafsīr ibn Kathīr, he (rahimahullah) says, Performance of the righteous actions is Al-Birr and abandoning the evil reprehensible acts is At-Taqwa 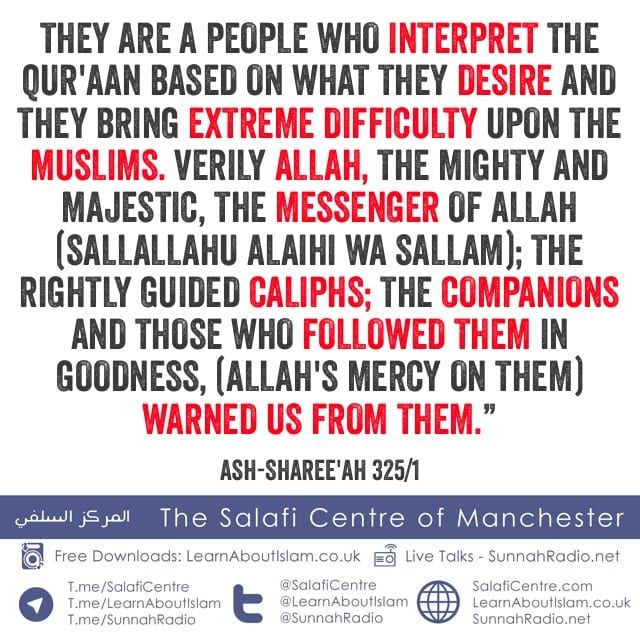 Is there present in this present time, those who carry the ideology of the Khawaarij (renegades)?

“Yaa Subhaanallah (Far removed is Allah from every imperfection)! This is present right now, are these not the actions of the Khawaarij?

Excommunicating Muslims (from Islaam) and worse than that, killing of Muslims; attacking them with bombs; this is the methodology of the Khawaarij.

And it comprises of three affairs:

Secondly: Exiting from obedience of the (Muslim) ruler.

Thirdly: Making permissible the blood of the Muslims. (i.e. allowed to kill them).

This is the methodology of the Khawaarij and even if an individual only believes this in his heart, and does not speak about it, nor act on it, he has still become a Khaarijee (renegade), due to his Aqeedah and opinions, which have not been openly expressed by him.”(1)

(1) Shaykul Islaam ibn Taymiyyah (rahimahullah) said about the characteristics of the Khawaarij:

“Then indeed there is none more harmful upon the Muslims than them; neither the Jews nor the Christians; for indeed they strived in killing every Muslim that did not agree with their view, declaring the blood of Muslims, their wealth and slaying of their children lawful, whilst making takfeer of them, due to their ignorance and innovations that caused to stray.” Minhaaj As-Sunnah 248/5
http://dusunnah.com/wp-content/uploads/2016/08/Warning-Against-IS.pdf

“Neither the scholars of old nor of these times, ever differed about the Khawārij. They regarded them as an evil people who were disobedient to Allāh, the Mighty and Majestic, and His Messenger (sallallahu alaihi wa sallam) even though they prayed, fasted and exerted themselves in worship, and all of this was of no benefit to them, even though they were apparent in enjoining the good and forbidding the evil, and that did not benefit them because they are a people who interpret the Qur’aan based on what they desire and they bring extreme difficulty upon the Muslims. Verily Allah, the Mighty and Majestic, the Messenger of Allah (sallallahu alaihi wa sallam); the rightly guided caliphs; the companions and those who followed them in goodness, (Allah’s mercy on them) warned us from them.” Ash-Sharee’ah 325/1

The Khawaarij Past and Present: ISIS Daesh in Iraq & Syria: Ibn Kathir (died 774 AH): If The Khawaarij Ever Gained Strength in Iraq and Syria, There Would Be Mass Killing