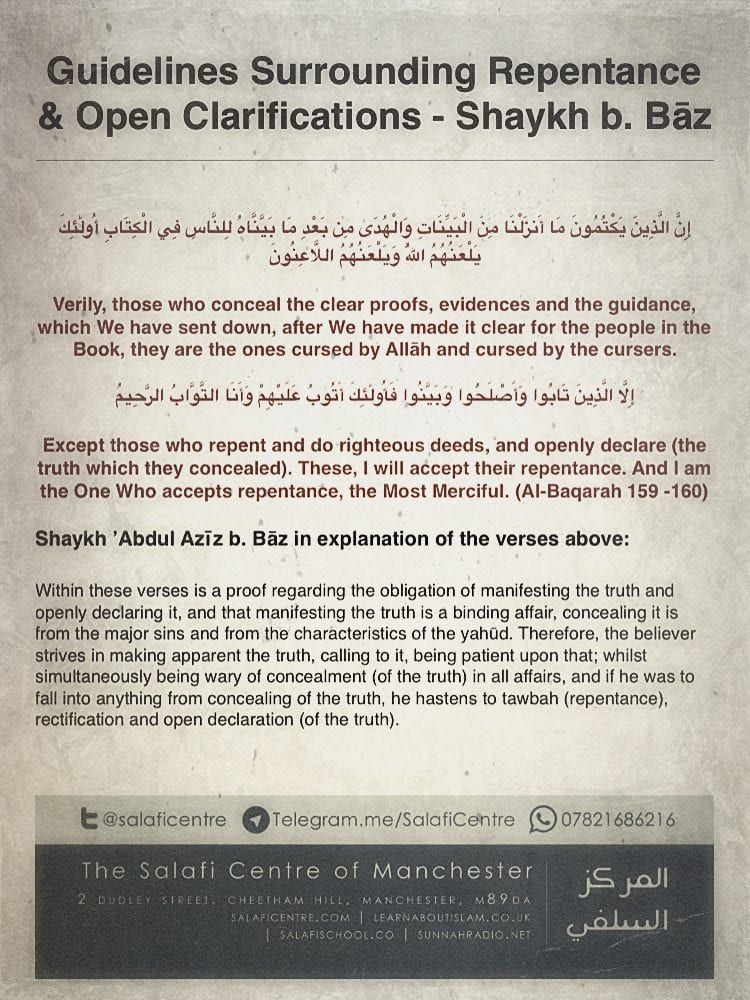 Verily, those who conceal the clear proofs, evidences and the guidance, which We have sent down, after We have made it clear for the people in the Book, they are the ones cursed by Allāh and cursed by the cursers.

Except those who repent and do righteous deeds, and openly declare (the truth which they concealed). These, I will accept their repentance. And I am the One Who accepts repentance, the Most Merciful. (Al-Baqarah 159 -160)

Shaykh ’Abdul Azīz b. Bāz in explanation of the verses above:

Within these verses is a proof regarding the obligation of manifesting the truth and openly declaring it, and that manifesting the truth is a binding affair, concealing it is from the major sins and from the characteristics of the yahūd. Therefore, the believer strives in making apparent the truth, calling to it, being patient upon that; whilst simultaneously being wary of concealment (of the truth) in all affairs, and if he was to fall into anything from concealing of the truth, he hastens to tawbah (repentance), rectification and open declaration (of the truth).

Allāh, Ar-Rabb explained that from the completeness and conditions of tawbah (repentance) is:

Rectification (of oneself) and open declaration (of the truth and the falsehood or sin, which is being repented from). Therefore, whoever repents for what has passed from his sins, then it is compulsory upon him to rectify his affairs and it is followed up with repentance, with truthful belief and righteous actions, and openly declaring the truth. He (Mighty and Majestic) said,

Hence, clarifying the truth and calling to it is a must, and it is also a necessity that repentance is followed up with righteous actions, likewise it is binding to follow it up with open declaration. So, if the repentance was due to concealing the truth, then an open declaration is a requirement so that it is known he has returned from his falsehood and that he is firm upon the truth and is treading its path, in opposition to the yahūd and those who are like them.

For indeed, they regard clarification of the truth and repentance to be a deficiency and belittlement, so they continue in their concealment and rejection of the truth for the purpose of establishing their desires and lowly goals.

It is not suitable for a believer that he resembles the enemies of Allāh in concealing the truth and lack of clarifying it, due to pursuing an object of desire from amongst the various sought-after worldly goals.

Likewise, it is not befitting to shy away from returning to the truth, for returning to it is a virtue and correct, whilst remaining upon falsehood is lowliness, humiliation, vileness and leads to being exposed to the displeasure of Allāh (The Mighty and Majestic). Thus, it is a must to return to the truth and to caution from falsehood, in order to safeguard oneself from the anger and punishment of Allāh, so that you may become successful by way of noble means and attain a praiseworthy ending.

Do This if They Say That There is No Student Amongst You!

Written by The Salafi Centre of Manchester on March 19, 2017. Posted in Da'wah - Calling To Islam.

Except from article in this link:

Written by Abdullah Jallow on April 30, 2012. Posted in Uncategorized.