Written by Abu Aa'isha Amjad on May 5, 2018. Posted in Aqeedah (Creed & Belief), Articles, Basics, Morals and Manners - 'Akhlaaq', Purification of The Soul.

Shaykh Sālih al-Fawzān explains verses 7-8 of Al-Hujurāt and within theses verses are the following benefits:

And know that, among you there is the Messenger of Allāh (sallallāhu alaihi wa salam). If he were to obey you (i.e. follow your opinions and desires) in much of the matter, you would surely be in trouble, but Allāh has endeared the Faith to you and has beautified it in your hearts, and has made disbelief, wickedness and disobedience (to Allāh and His Messenger (sallallāhu alaihi wa salam) hateful to you. These! They are the rightly guided ones. (Al-Hujurāt: 7)

Shaykh Sālih al-Fawzān in explanation of the end of this verse says,

Sins are of three categories;

Allāh has made these three categories detested to the believers, those with true belief. (This enables them to stay away from perpetrating these sins.)

Firstly, disbelief is hated to them, due to their ēmān being firm and established.

Secondly, wickedness is hated to them, because of this they do not commit major sins, the likes of drinking alcohol, fornication, stealing e.t.c.

Thirdly, disobedience is hated to them, as a result of this they do not oppose the prohibitions (which are established from the sunnah of Allāh’s Messenger (sallallāhu alaihi wa salam)).

When it reaches them that the prophet (sallallāhu alaihi wa salam) forbade something, they stay far away from it and they are not tempted to carry it out ever. This is because they hate it, since Allāh has placed in their hearts dislike for it.

‎ أُولَٰئِكَ هُمُ الرَّاشِدُونَ
These! They are the rightly guided ones.

Meaning those who are described with the aforementioned characteristics in the verse. They are the rightly guided ones. And being rightly guided is in opposition to being upon misguidance.

Verily, the Right Path has become distinct from the wrong path.

and His statement (The Mighty & Majestic),

(This is) a Grace from Allah and His Favour. And Allah is All-Knowing, All-Wise. (Al-Hujurāt: 8)

This which has transpired for the rightly guided (of guidance and praiseworthy characteristics), has only occurred due to the Favour and Grace of Allāh, not due to their own power or strength. Indeed it is only due to Allāh who has given them success.

This (verse) has within it a reminder that a person shouldn’t be deceived with what he has from religion, knowledge or acts of worship. Instead, he thanks Allah for His blessings upon him (verbally with the tongue and physically with his limbs by using these blessings in the obedience of Allah), and he acknowledges (with his heart) that this is a favour from Allah bestowed upon him.

Allāh is All-Knowing of who is deserving of this grace and blessing.

He is the All-Wise, meaning he places affairs in their appropriate places, therefore he does not bestow this grace and blessing upon those who do not deserve it, verily He only bestows it upon those who are befitting of it. 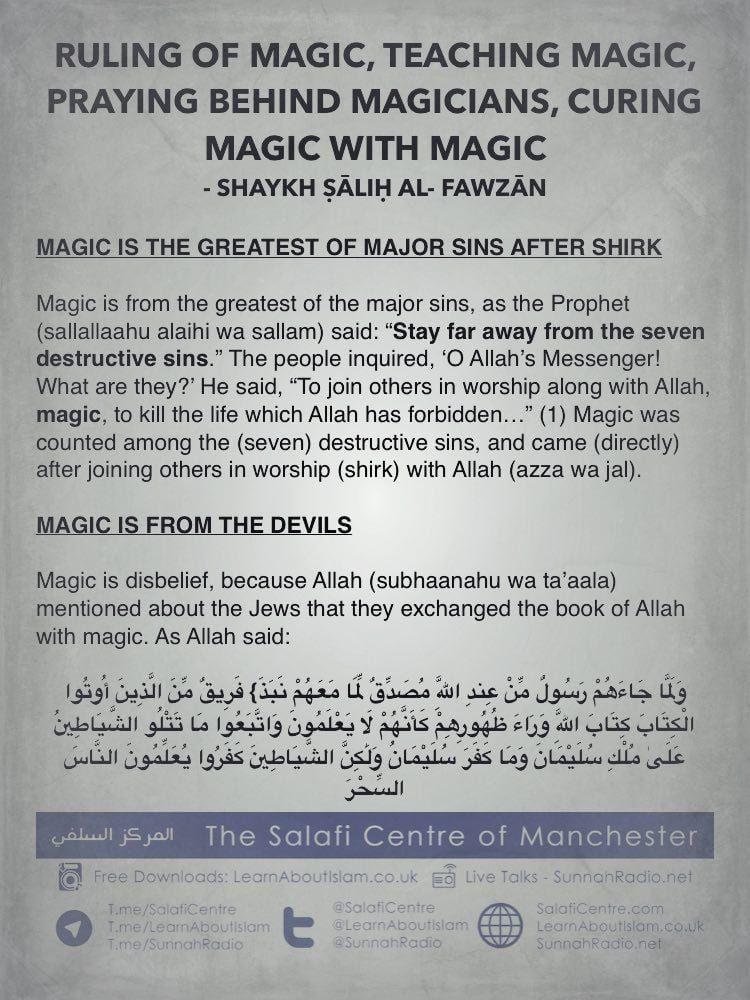 Magic is the Greatest of Major Sins after Shirk

Magic is from the greatest of the major sins, as the Prophet (sallallaahu alaihi wa sallam) said:

“Stay far away from the seven destructive sins.”

The people inquired, ‘O Allah’s Messenger! What are they?’

“To join others in worship along with Allah, magic, to kill the life which Allah has forbidden…” (1)

Magic was counted among the (seven) destructive sins, and came (directly) after joining others in worship (shirk) with Allah (azza wa jal).

Magic is from the Devils

Magic is disbelief, because Allah (subhaanahu wa ta’aala) mentioned about the Jews that they exchanged the book of Allah with magic.

And when there came to them a Messenger from Allah (i.e. Muhammad Peace be upon him) confirming what was with them, a party of those who were given the Scripture threw away the Book of Allah behind their backs as if they did not know! They followed what the Shayatin (devils) gave out (falsely of the magic) in the lifetime of Sulaiman (Solomon). Sulaiman did not disbelieve, but the Shayatin (devils) disbelieved, teaching men magic (Al-Baqarah 101-102)

Therefore, magic is from the actions of the devils and it is disbelief.

In the verse, Allah says:

But neither of these two (angels) taught anyone (such things) till they had said, “We are only for trial, so disbelieve not (by learning this magic from us).”

So, (the ayah) shows that teaching magic is disbelief.

And at the end of the verse He says:

And indeed they knew that the buyers of it (magic) would have no share in the Hereafter.

Meaning they have no portion (of rewards and delights of Jannah).

So, this shows that the magician if he does not repent to Allah, then he has no portion in the hereafter (Jannah), and this is the disbeliever. Magic is disbelief and based upon this prayer behind a magician is impermissible, except if he repents to Allah (subhaanahu wa ta’aala) and abandons magic and repents with a correct repentance, and whoever believes in magic (even if he doesn’t perform it himself) … then this is his ruling too (i.e. that he is a disbeliever just as the magician is), and refuge is sought with Allah.

As for the issue of curing magic with magic and its likes (from the other affairs which are haram), then that which is correct from the two positions of the Scholars is that it is not permissible, because curing is only (allowed) with that which is Halaal (permissible) or Mubaah (allowed), and Allah did not place a cure (for) the Muslims in that which He has made impermissible for them.

And on the authority of ibn Masood (radia Allaahu anhu) that the Prophet (sallallaahu alaihi wa sallam) said:

“Indeed, Allaah has not made your cure to be found in anything that He has forbidden you from.” (3) 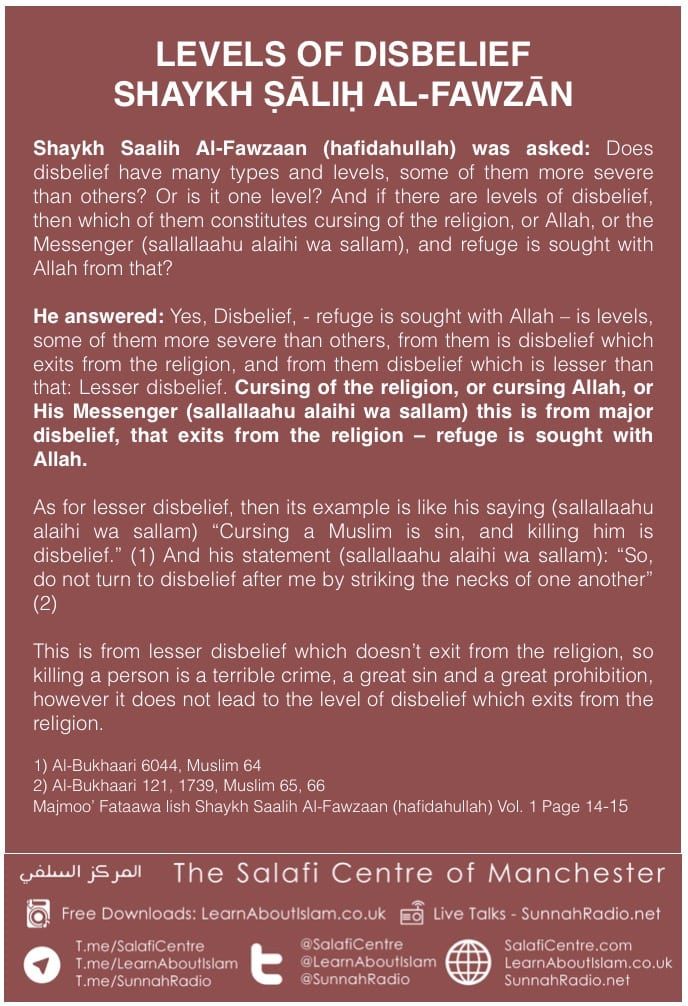 Does disbelief have many types and levels, some of them more severe than others? Or is it one level? And if there are levels of disbelief, then which of them constitutes cursing of the religion, or Allah, or the Messenger (sallallaahu alaihi wa sallam), and refuge is sought with Allah from that?

As for lesser disbelief, then its example is like his saying (sallallaahu alaihi wa sallam)

“Cursing a Muslim is sin, and killing him is disbelief.” (1)

“So, do not turn to disbelief after me by striking the necks of one another” (2)

The Cost of Disbelieving in Allah

Written by The Salafi Centre of Manchester on March 2, 2017. Posted in Basics, Da'wah - Calling To Islam, Pearls of Wisdom, Qur'aan.

And nothing prevents their contributions from being accepted from them except that they disbelieved in Allah and His Messenger.

This one has cursed Allah -Subhaanahu wa t’ala- Shaykh Fawzaan

Has everyone disbelieved who curses the religion or rejects the sunnah?

There is no doubt whatsoever in this; whoever curses the religion or rejects the Sunnah then verily he has disbelieved, because he is a denier and disbeliever in the Sunnah; also he who curses Allah’s religion, which Allah has chosen for his slaves; then he has cursed that which Allah has chosen for his slaves and legislated for them, so this one has cursed Allah -azza wa jal- there is no doubt at all of his disbelief , he who  belittles Allah (and attributes deficiencies to him; Glorified and far removed is Allah from all imperfections) .

Shaikh Fawzaan: The Methodology of Ahlus Sunnah In Their Combat Against The Khawaarij

Written by The Salafi Centre of Manchester on October 24, 2011. Posted in Deviated Groups, Sects and Parties.

Sheikh Saaleh Al-Fawzaan commented on the above statement of Imaam Barbahaaree (rahimahullaah) saying:

We know that the khawaarij are those who hold that they can renounce obedience (to the ruler). They hold that the ruler is not given the oath of allegiance or that it is not binding upon the people to maintain their oath of allegiance to him when he becomes sinful, and they (also) declare the Muslims to be disbelievers for committing major sins.  So if they adopt this school of thought and there arises neither uproar nor killing, then they are left alone, advised and given clarification in hope that they may repent.  If they cause uproar and manifest their strength, it then becomes obligatory upon the Muslims to fight them to avert their evil.

And regarding the saying of Imaam Barbahaaree (rahimahullaah):

‘It is permissible to fight the Khawaarij if they attack the wealth of the Muslims, or the Muslims and their families;’ because the Prophet (sallal-laahu-alayhi-wasallam) commanded that they are to be fought, and because Ali (radiyallaahu-anhu) fought them when they attacked and killed Abdullaah Ibn Khabbaab al Arrat and ripped open the stomach of his pregnant wife.  So Ameerul Mumineen Ali (radiyallaahu-anhu) decided to fight them as they brought about a good reason to be fought against.

And regarding the saying of Imaam Barbahaaree (rahimahullaah): ‘But if they are dispersed, then the Muslim leader is not to seek after them.”  If they refrain from fighting, the ruler is neither to chase them nor carry out a military expedition against them, as long as they do not commit acts of transgression. And no doubt they are misguided and are to be advised in hope that they may return (repentant) and are not fought.