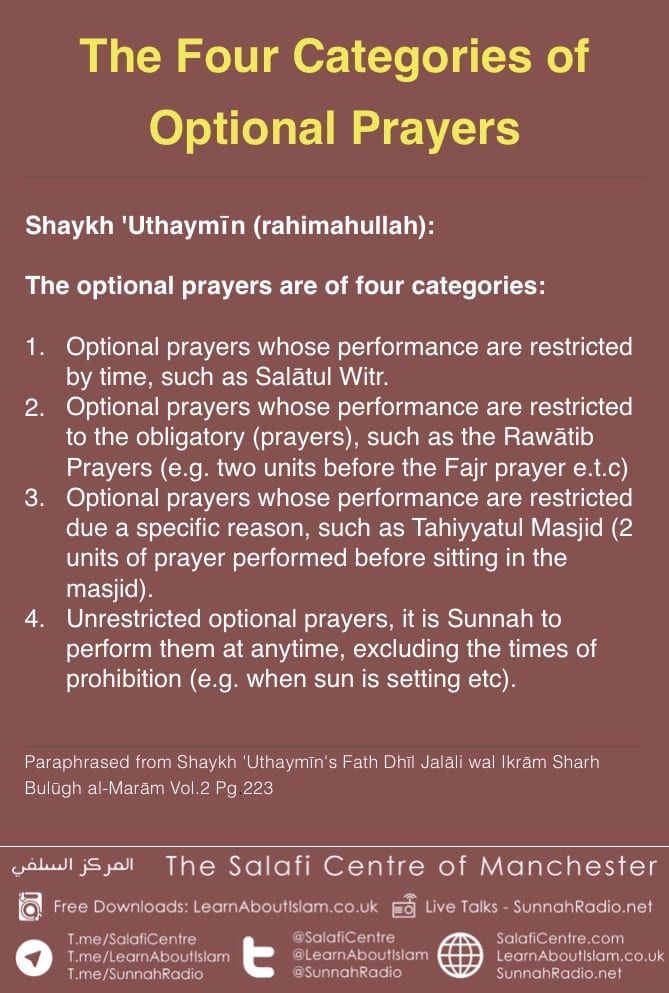 The Four Categories of Optional Prayers

The optional prayers are of four categories:

Are the 2 Rakah before Maghrib from the Sunnah? 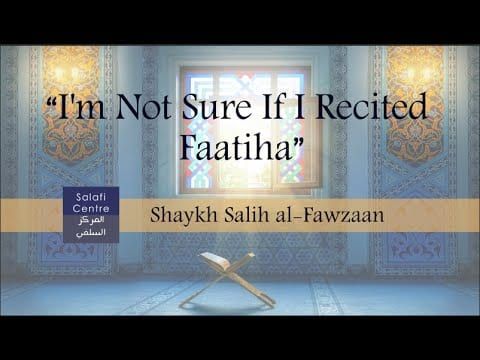 “I’m Not Sure If I Recited Faatiha” – Shaykh Fawzaan

Written by The Salafi Centre of Manchester on May 16, 2016. Posted in Articles, Fatawa-Rulings, Salaah - Prayer, Video.

Ash Shaykh Saalih Al Fawzaan (hafidahullah) was asked regarding a woman who prayed but does not remember if she has recited Al-Faatihah or not?

Answer:
If this was from the angle of Waswaas [Satanic whisperings] and it occurs a lot to her then indeed she should not pay attention to it.

As for if this was accidental (i.e. left out unintentionally) then the origin is that she has not read it, therefore it is a must that she reads it.

Non obligatory prayers in the masjid or at home? – Shaykh Al-Uthaymeen – Rahimahullah

All of the Nawaafil (supererogatory) are better (to be performed) in the home, due to the statement of the Prophet – sallallaahu alaihi wa sallam – : “The best prayer of a man is (the one performed) in his house, except the obligatory prayers”And the wisdom (behind) the naafila prayer being better in the house is: that the home does not become like a grave, i.e. He does not pray in it. And all of the prayers are a blessing.

Raising Hands for Dua after the Adhan – Permanent Committee

Because that is affirmed from the prophet -May Allah’s Peace be Upon Him- from the hadith of Jaabir bin Abdillah al-Ansaari-May Allah be pleased with him- in Sahih Al-Bukhaari, and that is without raising of the hands, because that is not reported in this place, so it is considered an innovation to do it.

1. O Allah , Lord of this perfect call and established prayer. Grant Muhammad the intercession and favor, and raise him to the honored station You have promised him

Fiqh of Prayer: The One who has not Prayed Maghrib and Enters the Congregation of ‘Isha

This short series of articles will research some of the issues relating to the prayer. It will be organised in a question and answer style with all information referenced to the fatawaa of the scholars.

Q: A person enters the masjid for ‘Isha prayer, then he remembers he has not yet prayed Maghrib so what does he do?

A: If you enter the masjid and the ‘Isha prayer is about to be established [i.e. iqaama has been called and it is beginning] but then you remembered you have not prayed Maghrib, in that case you enter with the ‘Isha congregation with the intention of Maghrib. The first three raka’aat are prayed as normal, but when the Imaam stands up after the third rak’at to start the fourth rak’at, you stay sitting and wait for the Imaam and rest of congregation to complete their fourth and then give the salam [tasleem] with the Imaam together at the end.

Similarly though, you can stay sitting after the third and finish the prayer and give the salam by yourself, then rise up and join the Imaam and congregation in what is left of the ‘Isha prayer [i.e. join them in their final rak’at of ‘Isha and then continue after they finish].

It is of no harm that the intentions are different between yourself and the Imaam in accordance to the correct opinion of the scholars on that.