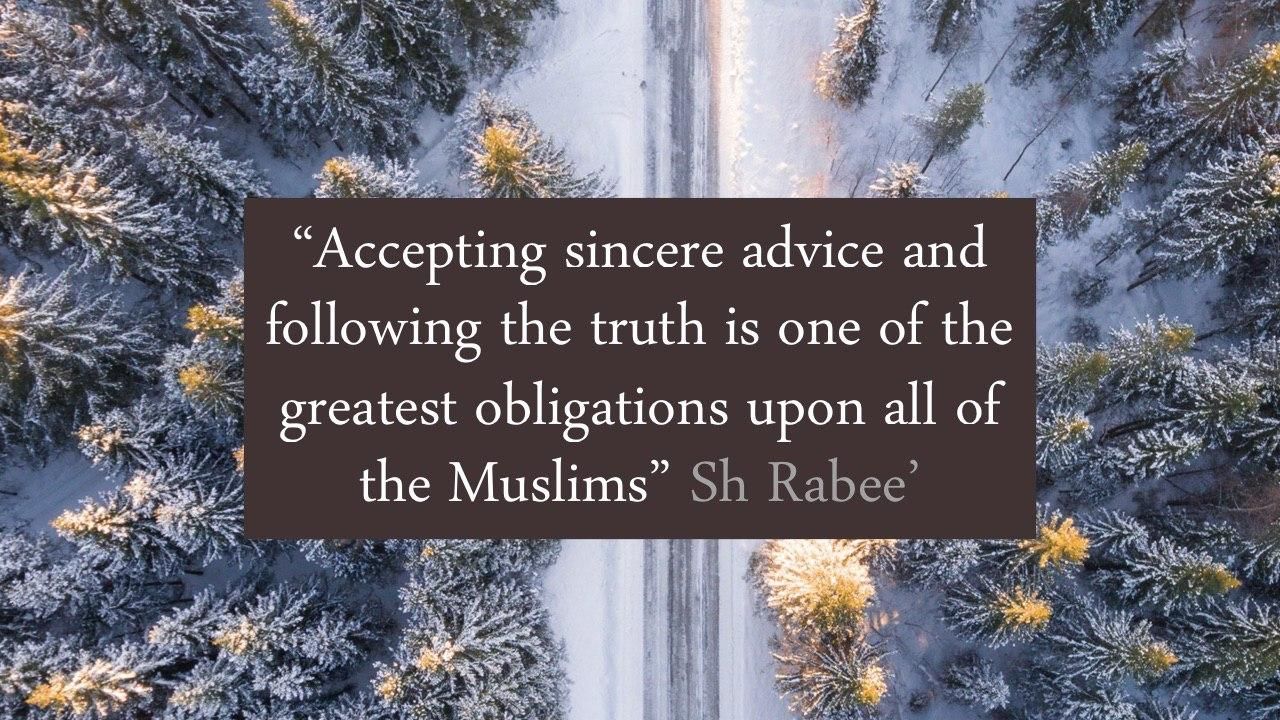 Written by Abu Aa'isha Amjad on February 28, 2020. Posted in Morals and Manners - 'Akhlaaq', Purification of The Soul, Scholars of Islam.

Accepting sincere advice and following the truth is one of the greatest obligations upon all of the Muslims, from whichever source it comes from. It is not permissible for a Muslim to belittle and disrespect the sincere adviser regardless what his status may be.

I seek refuge with Allah that I reject an advice and defend a mistake or falsehood which emanated from me; for indeed this is from fhe means to evil, infact it is from the ways of the people of corruption, arrogance and arrogant stubbornness. And when he is reminded he doesn’t take the reminder, as Allah said,

And those who, when they are reminded of the Ayat (proofs, evidences, verses, lessons, signs, revelations, etc.) of their Lord, fall not deaf and blind thereat. (Al-Furqan: 73) 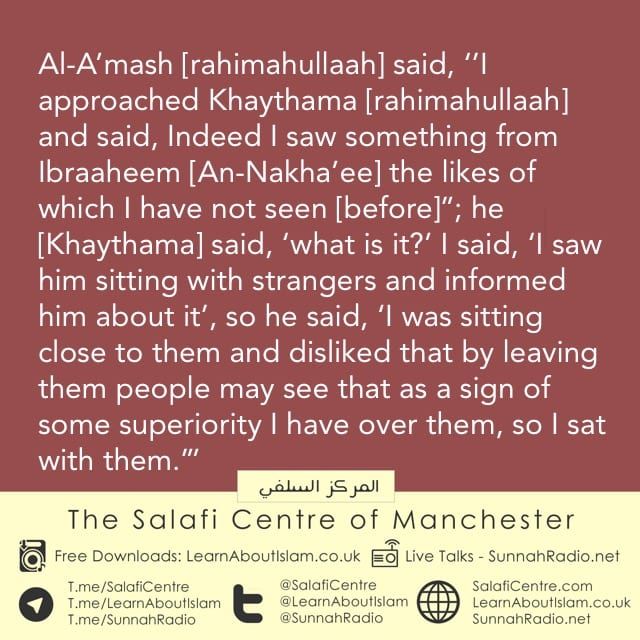 Having Humility and Avoiding Snobbery – Story from Al-A’mash

Written by Abdullah Jallow on March 28, 2017. Posted in Articles, Morals and Manners - 'Akhlaaq', Pearls of Wisdom, Purification of The Soul, The Salaf - Pious Predecessors.

Al-A’mash [rahimahullaah] said, “I approached Khaythama [rahimahullaah] and said, Indeed I saw something from Ibraaheem [An-Nakha’ee] the likes of which I have not seen [before]’’; he [Khaythama] said, ‘what is it?’ I said, ‘I saw him sitting with strangers and informed him about it’, so he said, “I was sitting close to them and disliked that by leaving them people may see that as a sign of some superiority I have over them, so I sat with them.”” 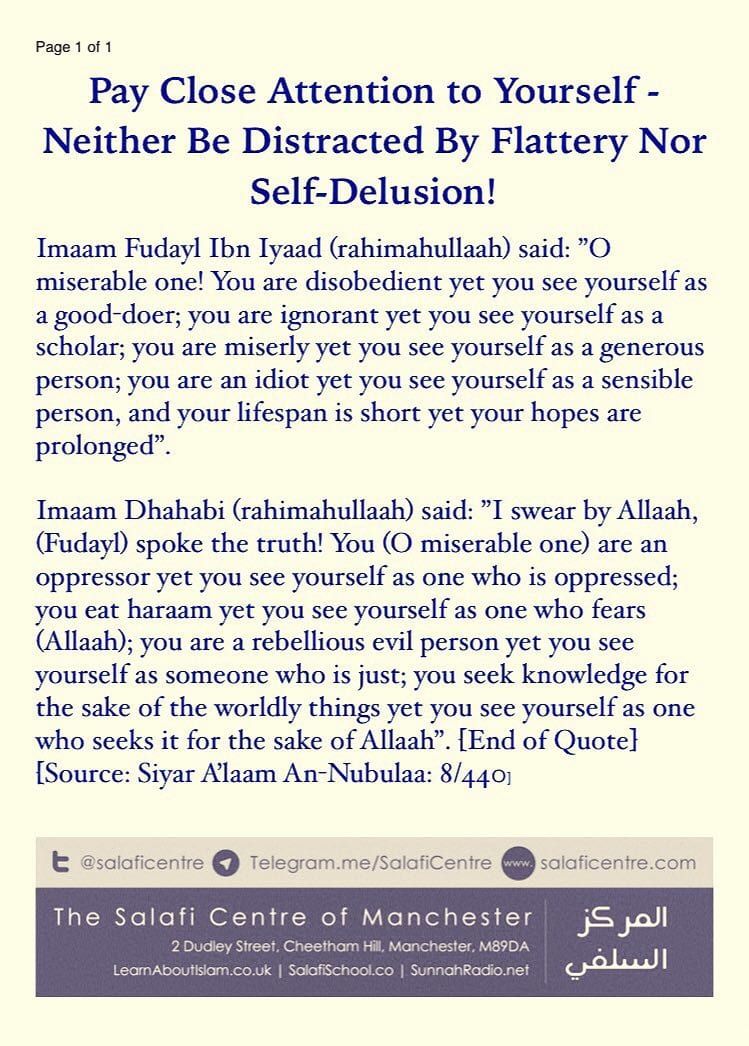 Pay Close Attention to Yourself -Neither Be Distracted By Flattery Nor Self-Delusion!

Written by The Salafi Centre of Manchester on January 27, 2017. Posted in Articles, Morals and Manners - 'Akhlaaq', Pearls of Wisdom, Purification of The Soul. 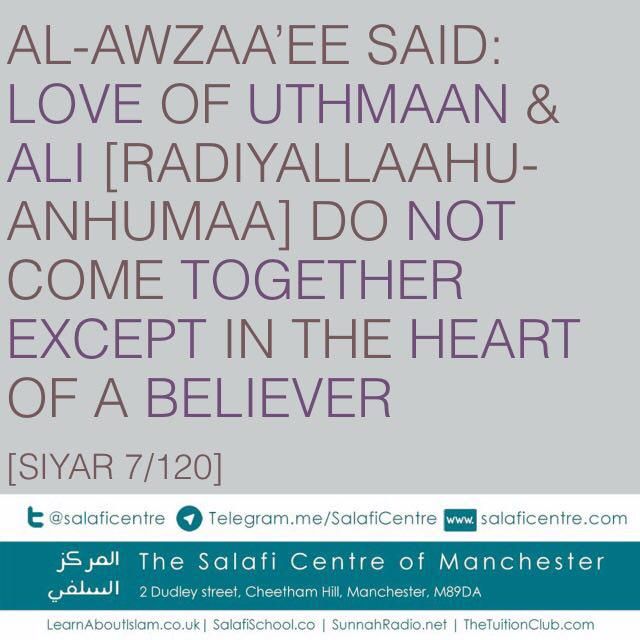 The Love of Uthman and Ali- Al Awzaaee

Al Awzaaee said: The love of Uthman and Ali ( radiyallahuanhumaa) do not come together except in the heart of a believer.

Written by The Salafi Centre of Manchester on July 26, 2016. Posted in Morals and Manners - 'Akhlaaq', Scholars of Islam, The Salaf - Pious Predecessors.

Humility of the heart is in greater need of being observed than humility of the limbs. That is because the one who has awe of Allah in his heart is [consequently] more observant of Allah The Mighty and Majestic and of His rights.

Hence, it is necessary for humility of the heart to be paid attention to more than humility of the limbs.It is possible for any individual to practise humility of the limbs, even inside his house. Everyone is able to stand praying motionlessly [out of apparent humility], however having a heart that is heedless. Therefore, it [the heart] is the basis. It is that that requires a person to pay attention to, taking constant and absolute care of it.

[7] Few Reminders from our Salaf and Imaams of The Sunnah: [A Woman said to Ash-Shabi, ”O Scholar…..]

Written by The Salafi Centre of Manchester on January 3, 2015. Posted in Morals and Manners - 'Akhlaaq', Pearls of Wisdom, Purification of The Soul, Scholars of Islam, Worship - 'Ibaadah'.

A woman said to Ash-Shabee (rahimahullaah), ”O scholar! Give me a verdit.” So he said: Indeed a scholar is one who fears Allaah (The Mighty and Majestic).” 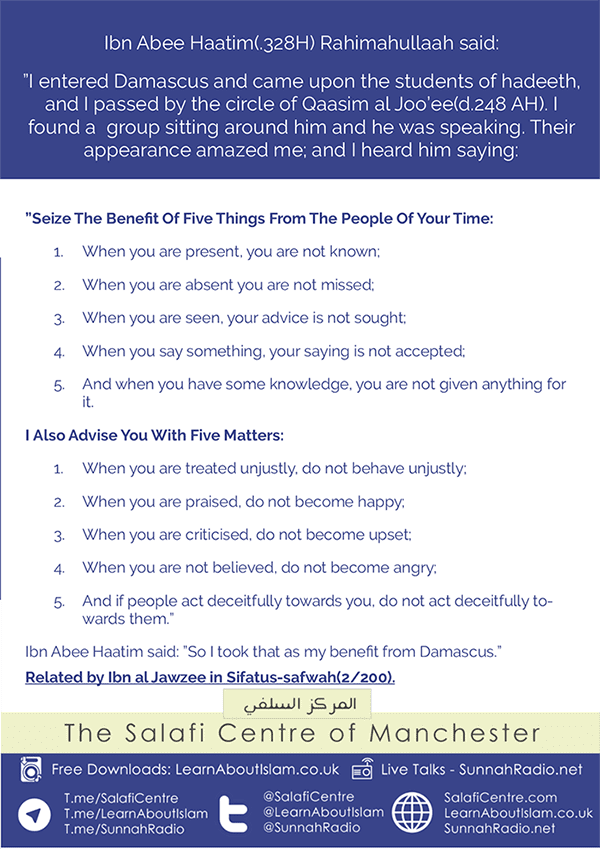 Written by Abdullah Jallow on May 29, 2014. Posted in Brotherhood, Da'wah - Calling To Islam, Morals and Manners - 'Akhlaaq', Pearls of Wisdom, Purification of The Soul, Scholars of Islam, The Salaf - Pious Predecessors.

”I entered Damascus and came upon the students of hadeeth, and I passed by the circle of Qaasim al Joo’ee(d.248 AH). I found a  group sitting around him and he was speaking. Their appearance amazed me; and I heard him saying:

”Seize The Benefit Of Five Things From The People Of Your Time:

I Also Advise You With Five Matters:

Ibn Abee Haatim said: ”So I took that as my benefit from Damascus.”

Written by The Salafi Centre of Manchester on April 23, 2014. Posted in Announcements, Brotherhood, Methodology - 'Manhaj'.

Pray all the brothers and sisters are well. May Allaah (The Most High) grant (us and them) beneficial knowledge, pure provision and righteous action.

We wish to make something very clear… It has come to Al Markaz As Salafi’s attention that some individuals wish to donate for Allaah’s sake.  Then we encourage them to khayr (goodness) for indeed the reward is with Allah.

However we must bear in mind a very simple affair: Allaah is the One who will establish the project; whether that is through the hands of two people or two thousand people.  Let no person with ulterior motives think that this school is a pet project for them; nor should anyone be oblivious to the fact that we will not bend to anyone’s whims and desires, simply because they gave something (little or plenty). What is most important is that we correct our intentions when giving for the sake of Allah, lest we lose any reward when doing so.

Likewise, let it be absolutely clear that money does not give a status or say in how we pursue the project. We will be consulting responsible and experienced people within the community and outside of it.  The dawa has never been based on money nor are we in need of money for favours, or to heap praise on someone; brushing aside the sound manhaj positions to gather wealth.

By the Mercy of Allah, we have seen the fitnah and errors committed; all in the pursuit of money for a project. And so we will not fall [by Allah’s permission] to those same errors; neither compromising the sound Manhaj positions nor our stances towards those who deliberately seek to dilute the correct stances towards ahlul bidah.  Donating is free for all to do and the reward is with Allah. How many children we have seen give in the projects established amongst the salafis around the country, let alone those who are wealthy.  And it is Allah who records it and indeed, Allah is sufficient as a Helper and a Guardian.