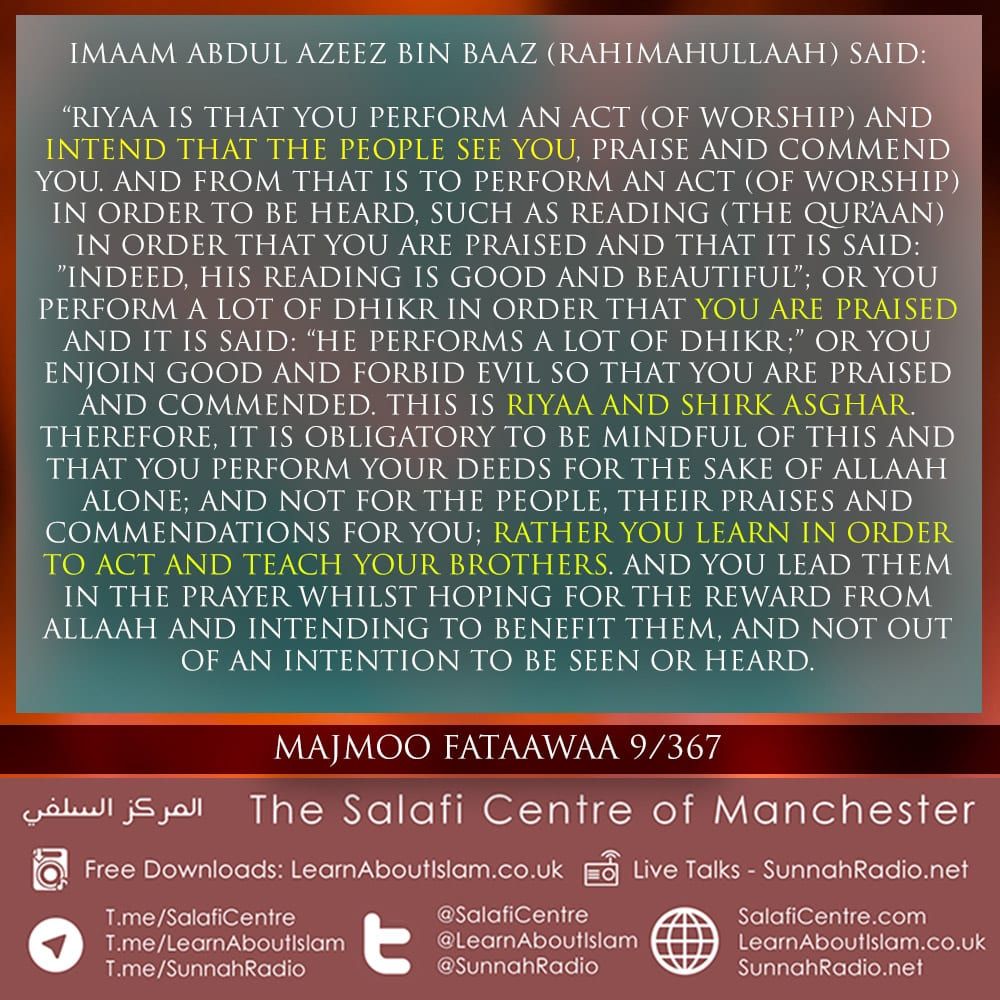 Written by The Salafi Centre of Manchester on November 29, 2014. Posted in Aqeedah (Creed & Belief), Monotheism - Tawheed, Pearls of Wisdom, Purification of The Soul, Scholars of Islam, Worship - 'Ibaadah'.

“Riyaa is that you perform an act (of worship) and intend that the people see you, praise and commend you. And from that is to perform an act (of worship) in order to be heard, such as reading (the Qur’aan) in order that you are praised and that it is said: ”Indeed, his reading is good and beautiful”; or you perform a lot of Dhikr in order that you are praised and it is said: “He performs a lot of dhikr;” or you enjoin good and forbid evil so that you are praised and commended. This is Riyaa and Shirk Asghar. Therefore, it is obligatory to be mindful of this and that you perform your deeds for the Sake of Allaah alone; and not for the people, their praises and commendations for you; rather you learn in order to act and teach your brothers. And you lead them in the prayer whilst hoping for the reward from Allaah and intending to benefit them, and not out of an intention to be seen or heard.

Written by The Salafi Centre of Manchester on August 8, 2014. Posted in Da'wah - Calling To Islam, Methodology - 'Manhaj', Morals and Manners - 'Akhlaaq', Pearls of Wisdom, Scholars of Islam, Worship - 'Ibaadah'.

Unity; oneness of purpose and truthful co-operation upon truth in every Ummah, is without a doubt the underlying reason for success, victory and nobility in this life and the next.

Written by The Salafi Centre of Manchester on May 29, 2014. Posted in Family & Women, Fatawa-Rulings, Scholars of Islam.

Imaam Abdul Azeez Bin Baaz was asked whether a woman is considered to be following her whims and desires if she works without being in need of money.

The Imaam (rahimahullaah) said that such a woman is not considered to be following her whims/desires. Her engagement n work is not tantamount to following desires/whims if it is noble and safe occupation, and carried out amongst women, without free mixing with men.  And she only works amongst women without any injustice and hostility, with the permission of her husband.

The Imaam (rahimahullaah) also said that there are different kinds of work, and if the work includes disobedience to Allah, then it is obligatory on her to abandon it. If it includes free mixing between men and women and showing her beauty, then this is also evil. But if it is work that is allowed or legislated by Islamic law amongst her Muslim sisters, such as teaching girls, or working as a nurse, or working as a doctor for women; then there is no harm in this and all praise is due to Allaah.

Written by The Salafi Centre of Manchester on May 12, 2014. Posted in Da'wah - Calling To Islam, Scholars of Islam, Seeking Knowledge.