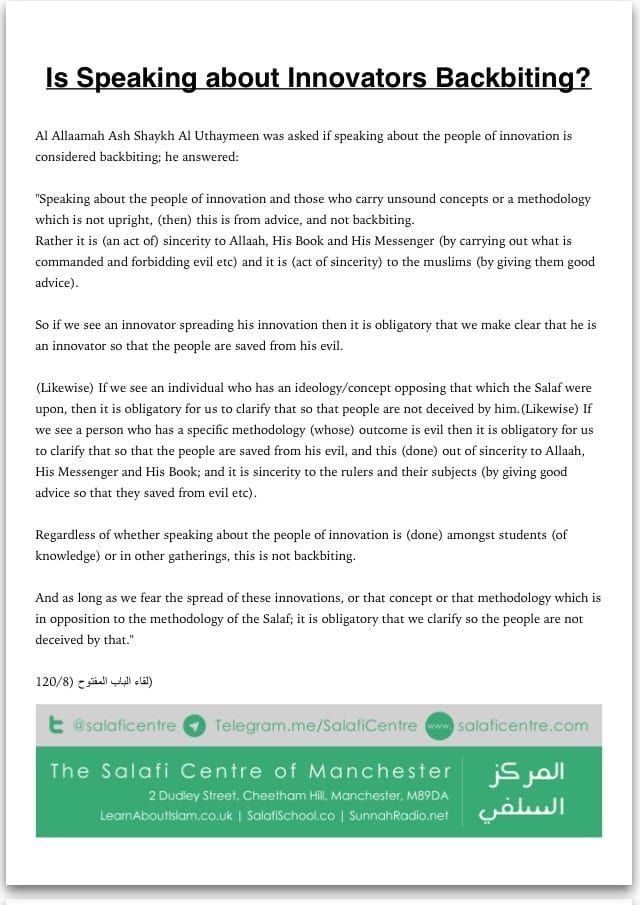 Written by The Salafi Centre of Manchester on April 4, 2016. Posted in Articles, Deviated Callers & Individuals, Must Read, Refutations.

Al Allaamah Ash Shaykh Al Uthaymeen was asked if speaking about the people of innovation is considered backbiting; he answered:

“Speaking about the people of innovation and those who carry unsound concepts or a methodology which is not upright, (then) this is from advice, and not backbiting.
Rather it is (an act of) sincerity to Allaah, His Book and His Messenger (by carrying out what is commanded and forbidding evil etc) and it is (act of sincerity) to the muslims (by giving them good advice).

And as long as we fear the spread of these innovations, or that concept or that methodology which is in opposition to the methodology of the Salaf; it is obligatory that we clarify so the people are not deceived by that.” 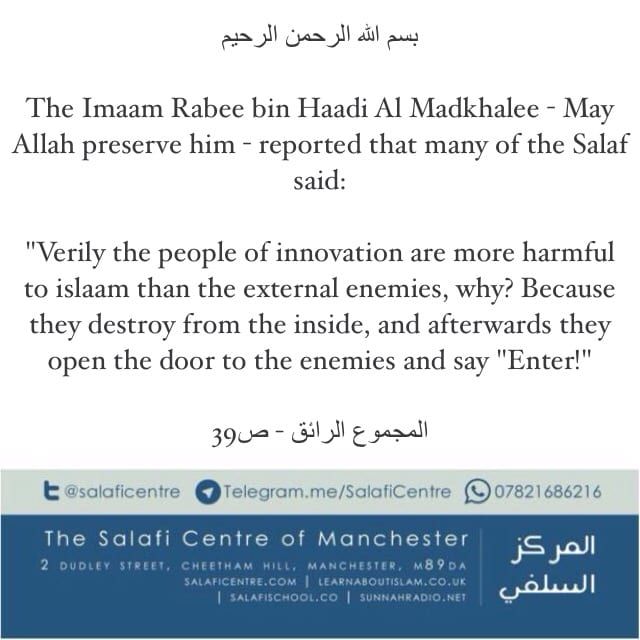 The Imaam Rabee bin Haadi Al Madkhalee – May Allah preserve him – reported that many of the Salaf said:

“Verily the people of innovation are more harmful to islaam than the external enemies, why? Because they destroy from the inside, and afterwards they open the door to the enemies and say “Enter!”

The Mubtadi (Abul Hasan al-Maribi) Blames the One who differentiated Between a Wasf (i.e. Description) and Jarh (disparagement)

(And had it been the case that every description is a disparagement), then Al-Aqra’u (the bald-headed one) would have been a disparagement against Naafi Bin Abbaas the servant of Abu Qataadah, and he (Naafi) was reliable.

(And had it been the case that every description is a disparagement), then Al-A’raj (i.e. the one with lame limbs causing him to limp) would have been a disparagement against Abdur-Rahmaan Bin Hurmooz, the limping one, and he was reliable, steadfast and a scholar.

And the nick name Ad-daal (i.e. ‘the misled one’ was given) to Mu-aawiyyah Bin Abdul Kareem Ath-Thaqafee and he was a truthful person; (but) he was neither misled in his narrations nor in his acts of worship, rather he was misled on the road (i.e. got lost) when he was young and was found; so he was nick-named Ad-daal (the misled one).

The scholars are acquainted with the link between the generalities and specifics between descriptions and disparagement, and likewise between descriptions and commendations. This is an old (affair) that has been firmly in place from the era of the science of scrutinizing narrators and the chains of transmission up to this era of Abul Fitan Al-Maribi (i.e. Abul Hasan Al–Maribi); however he has innovated a methodology for the people in this (affair), such as his lack of making a differentiation between the statement of a critic scholar in the biography of a man and his statement in disparagement against (a man).

In the biographies, the scholars mention what is in favour and against a person even if he is from the leaders of misguidance and a heretic, just as Imaam Dhahabi did in Siyar A’laam An-Nubulaa. Ibn Abee Du’aad—a leader from the leaders of misguidance and an enemy of Imaam Ahmad, and Ibn Sinaa whose state of affairs is well known and those similar to him– were they from those who were exalted in rank (with regards to their adherence to the Book and the Sunnah)? Were they from those exalted in rank (in the first place), let alone from the knowledgeable ones?! (However), these two people (i.e. Ibn Abee Du’aad and Ibn Sinaa) and their likes have biographies in Siyar A’laam Nubulaa (of Imaam Dhahabi). This is with regards to a biography- in it a person is described with what he is, and he is even described with what he is (with regards to) his physical attributes, and none of the scholars in our era have ever said that describing (such a person) with what he is (with regards to) his physical characteristics is (tantamount) to finding fault with Allaah’s creation!

As for disparagement of a narrator – disparagement and commendation, then a man is not mentioned except with what he deserves in relation to knowledge and the science of scrutinizing narrators and chains of transmission. And if he was one who has been declared disparaged (due to being a liar, unreliable etc), then his good deeds are never mentioned, regardless of the extent of his good deeds. (Therefore) compare Imaam Dhahabi’s work in Al-Meezaan and in As-Siyar and you will be acquainted with this knowledge.

Indeed, he (i.e. Abul Hasan Al-Maribi) conveys confusion in these affairs by way of increasing in the innovated speech of Muwaazanah and other than it of corrupt principles. And whenever he is facilitated with understanding, he does not understand. And whenever he is (facilitated) with a return (to correctness), he does not return; rather he refuses, except that he increases upon an evil understanding. [slightly paraphrased and abridged]

The statements of the scholars regarding the bidah of Muwaazanah

The Salafi Position on Terrorism-[Exposing the Compulsive, Persistent and Wicked Slanderers; Those Miscreants Who Fraudulently Attribute the Actions of the Khaarijites Terrorists to Salafiyyah and the Salafis]

The Salafee Position on Terrorism, Suicide Bombings, and Hijackings

The above link acquaints us with the Salafi’s position on terrorism and his (or her) unpromising stance towards the khaarijite terrorists. However, there are those compulsive, persistent and wicked Slanderers, who fraudulently attribute the satanic deeds of the Khaarijites Terrorists to Salafiyyah and the Salafis. They wish to slander Salafiyyah and the Salafis, so that they can extinguish the Qur’aan and the Sunnah with their wicked lying tongues. Allaah (The Most High) said:

They want to extinguish Allaah’s Light with their mouths (i.e. the Qur’an, the pure Islamic monotheism and the guidance Allaah sent Muhammad with) but Allah will not allow except that His Light should be perfected even though the disbelievers hate (it). [Soorah At-Tawbah: Ayah: 32]

Imaam Ibn Katheer (rahimahullaah) said: They want to extinguish what Allaah sent His Messenger with- the guidance and the religion of truth- merely by way of their arguments and fabrications. So their example in this (instance) is that of one who wants to extinguish the light of the sun or the moon by blowing at (them) and this (person) can never achieve this. [1]

All praise is due to Allaah, and salaat and salaam upon our Prophet Muhammad, his family and his companions.

My view with regards to the Muslim Brotherhood is that they are partisans (Hizbiyyoon) who covet the attainment of ruler ship; and that they do not give concern to calling to the correcting of the creed (Aqeedah).

As for the speech (found) in an audio recording that has come from me, then it is a slip of the tongue and does not change my stance in the slightest. [3]

Yes, he is not to be trusted; the one who is an Innovator is neither to be trusted nor his knowledge, nor (to have) a lackadaisical (stance) towards him. That is because if you (have) a lackadaisical (stance) towards him, the student will be influenced by his Shaikh-he will be influenced by his teacher. Therefore, it is obligatory to be distanced from the people of innovation, and the Salaf (pious predecessors) used to forbid (others) from sitting with the innovators, visiting and going to them; so that their evil is not spread to the one who sits with them and mixes with them.

Greenlane’s Admin: Shaikh Uthaymeen and six other scholars unveil the deviations of Adnaan Ar’oor; why do you hide truth & aggrandize status of those who defend him?!

Chronological History of Tamyee: From Ismaa’eeliyyah to Ma’rib