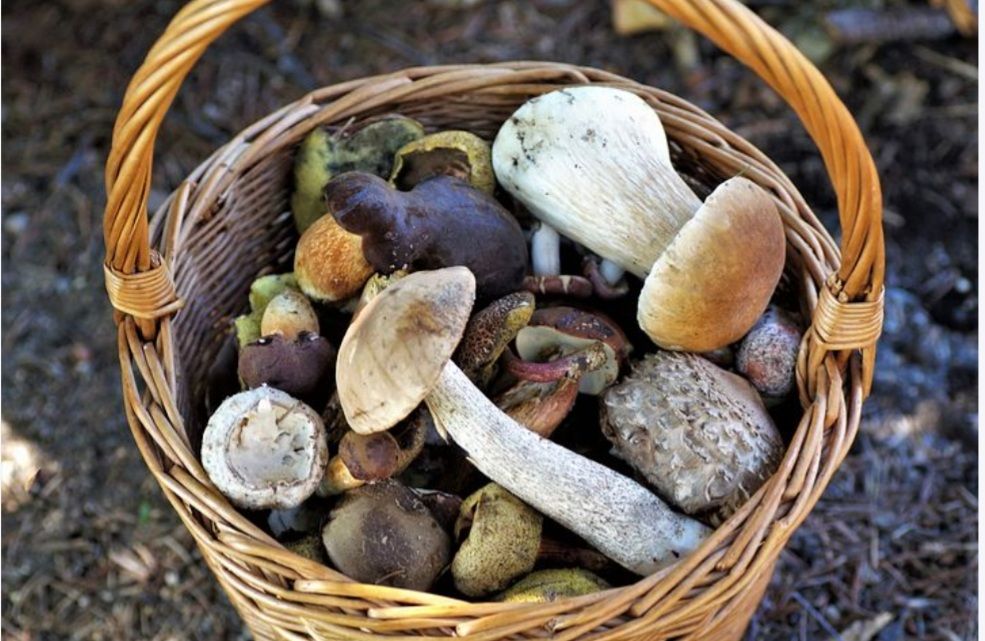 Growing Appeal Among Youth for End of Western Civilization! [Statement of Opportunistic European Rabble-rousers and Demagogues]

لِكُلِّ قَوْمٍ وَارِث وَلِكُلِّ أَرْضٍ حَارِث – Every people have an inheritor and every land has a cultivator! Just as the khawaarij (extremists) inherited their path from predecessors, likewise the European rabble-rousers inherited their path from predecessors, whilst the people of Sunnah adhere to justice based on the path of the Salafus Saaleh – the righteous predecessors (the companions of the Prophet and those who followed them).

Seeking to Divert Attention From Their Political Spins and Broken Promises

During the Ottoman era, the Christian leaders, amongst them priests, monks and kings, filled the European streets with hatred and grudges against Islam and Muslims, and the Christian clergy mobilized funds and volunteers to attack Muslims. The more the Ottomans defeated these crowds, the greater the wave of hatred and hatred for Islam and its people. So, the Christian leaders falsely accused the Ottomans of piracy and brutality, and these false accusations remained in the memories the Europeans. The attacks that were carried out by the Christian leaders in public was so that they could safeguard their political and material gains, maintain their hatred for Islam and its people, and in effect some of the ruling families in Europe were able to dominate European societies for a long period of time, amassed huge wealth, greatly enriched themselves, established a great aura around themselves, and in most cases persisted upon this path through misguidance and misleading others.

Although European societies revolted against these groups after discovering their perversion and misguidance with the beginning of the Renaissance and the beginning of a new stage in European history, (a) however the conscience of European society could not get rid of the sediments inherited from these groups towards the Islamic world in general and towards the Ottoman Empire in particular. So, because of this – with their military forces and backed by its material civilization, they rushed to take revenge against Islam and the Muslims, and took away their good possessions in the name of religious, economic, political and cultural motives. (b) And their writers and historians supported them to insult and distort Islam, propagate doubts about Islam, its creed and history. The Ottoman Empire received a great share of this fierce attack. (1)

Fear-mongering and Arousing Nationalistic Sentiments- [An Inheritance From Fir’awn]

Fir’aun (Pharaoh) said: “Leave me to kill Musa (Moses), and let him call his Lord (to stop me from killing him)! I fear that he may change your religion, or that he may cause mischief to appear in the land!” [Surah Ghaafir. Verse 26]

[وَقَالَ فِرْعَوْنُ – Fir’aun (Pharaoh) said] – Meaning, with haughtiness and tyranny, whilst deluding his foolish people; [ذَرُونِي أَقْتُلْ مُوسَىٰ وَلْيَدْعُ رَبَّهُ – Leave me to kill Musa (Moses), and let him call his Lord (to stop me from killing him)!] This was his (false) claim that had it not been for his consideration of the wishes of his people, he would have killed Musa and that (Musa’s) supplication to his Lord would not have prevented him from that. Fir’awn then mentioned what made him want to kill Musa and that he is a sincere adviser to his people, and that he wished to remove mischief from the land. Allaah (The Most High) stated that Fir’awn said:

[إِنِّي أَخَافُ أَنْ يُبَدِّلَ دِينَكُمْ أَوْ أَنْ يُظْهِرَ فِي الْأَرْضِ الْفَسَادَ – I fear that he (Musa) may change your religion, or that he may cause mischief to appear in the land!]

This is the most amazing the affair can be! The most evil one among the creation gives advice to the people against the best among the creation. This is (nothing but) disguised falsehood and propaganda, which cannot seize except the intellects of those (people) about whom Allaah stated: [فَاسْتَخَفَّ قَوْمَهُ فَأَطَاعُوهُ ۚ إِنَّهُمْ كَانُوا قَوْمًا فَاسِقِينَ – Thus he Fir’aun (Pharaoh)] befooled and misled his people, and they obeyed him. Verily, they were ever a people who were Fasiqun (rebellious, disobedient to Allah)]. [Surah Az-Zukhruf. Verse 54]

Allaah [The Most High] said: [قَالَ أَجِئۡتَنَا لِتُخۡرِجَنَا مِنۡ أَرۡضِنَا بِسِحۡرِكَ يَـٰمُوسَىٰ – He [Fir’awn] said, “Have you come to drive us out of our land with your magic O Musa?]

Fir’awn’s statements were intended to influence his people, because people are naturally attached to their homelands and it is difficult for them to abandon them. He told them that this was Musa’s goal, so that they hate and oppose him. (2)

Whenever the khawaarij or so a called lone wolf commits a crime against European citizens, the irresponsible politicians call it “a war declared on civilization,” in order to sow the seeds of discord between Muslim and non-Muslim citizens, whilst seeking to consolidate their divide and rule agenda. This is one of their strategies inherited from Fir’awn – the vile disbeliever. Allaah [The Exalted] said:

Verily, Fir’aun (Pharaoh) exalted himself in the land and made its people sects, weakening (oppressing) a group (i.e. Children of Israel) among them, killing their sons, and letting their females live. Verily, he was of the Mufsidoon]. [Surah Al-Qasas. Aayah 4] Imaam Al-Aloosee [may Allaah have mercy upon him] said, “He made them into sects and incited hatred and enmity between them, so that they do not come to an agreement (or become united in their stance against him)”. (3)

[ إِنَّهُ ۥ كَانَ مِنَ ٱلۡمُفۡسِدِينَ – Verily, he was of the Mufsidoon]- Meaning: Those whose intention is neither to rectify the religious nor worldly affairs. (4)

Indeed, just as we are well acquainted with the religious innovations of the extremists, we are also well acquainted with some of the plots of the opportunistic fear-mongers amongst the politicians who employ Fir’awn’s strategy of divide and rule in order to secure their interests. Our stance is clear and we strive to follow the path of sound rectification. Must read clarifications by some of our Mashaayikh in the UK.

The Salafi Response To The Terrorist Attacks In Paris, France: “Were they forbidding an evil?

Living With Non-Muslims In The West

Alliance with the non-Muslims is of two types – misunderstanding this affair leads people astray:

Treaties With The Non-Muslims: Is it Allegiance? Is it Apostasy?

Must read this book:

Footnote a: The Muslims are not indeed of this Renaissance or any change to return to glory, rather the only path to glory is the Qur’aan, the Sunnah and understanding of the Sahaabah. Read here: [Plight of a Pseudo Muslim Intellectual-[Seeks Rectification Through Other Than Path of Pious Predecessors, Replaces Upright Scholars With Heretical Philosophers And Seeks Victory Through Ideals of Militant Secularists In The Name of Civilization]:

Footnote b: This military and cultural war against Islaam reminds us of one of the plots of King Louis IX. https://salaficentre.com/2019/08/25/two-plots-of-king-louis-ix-leader-of-the-seventh-crusade/ 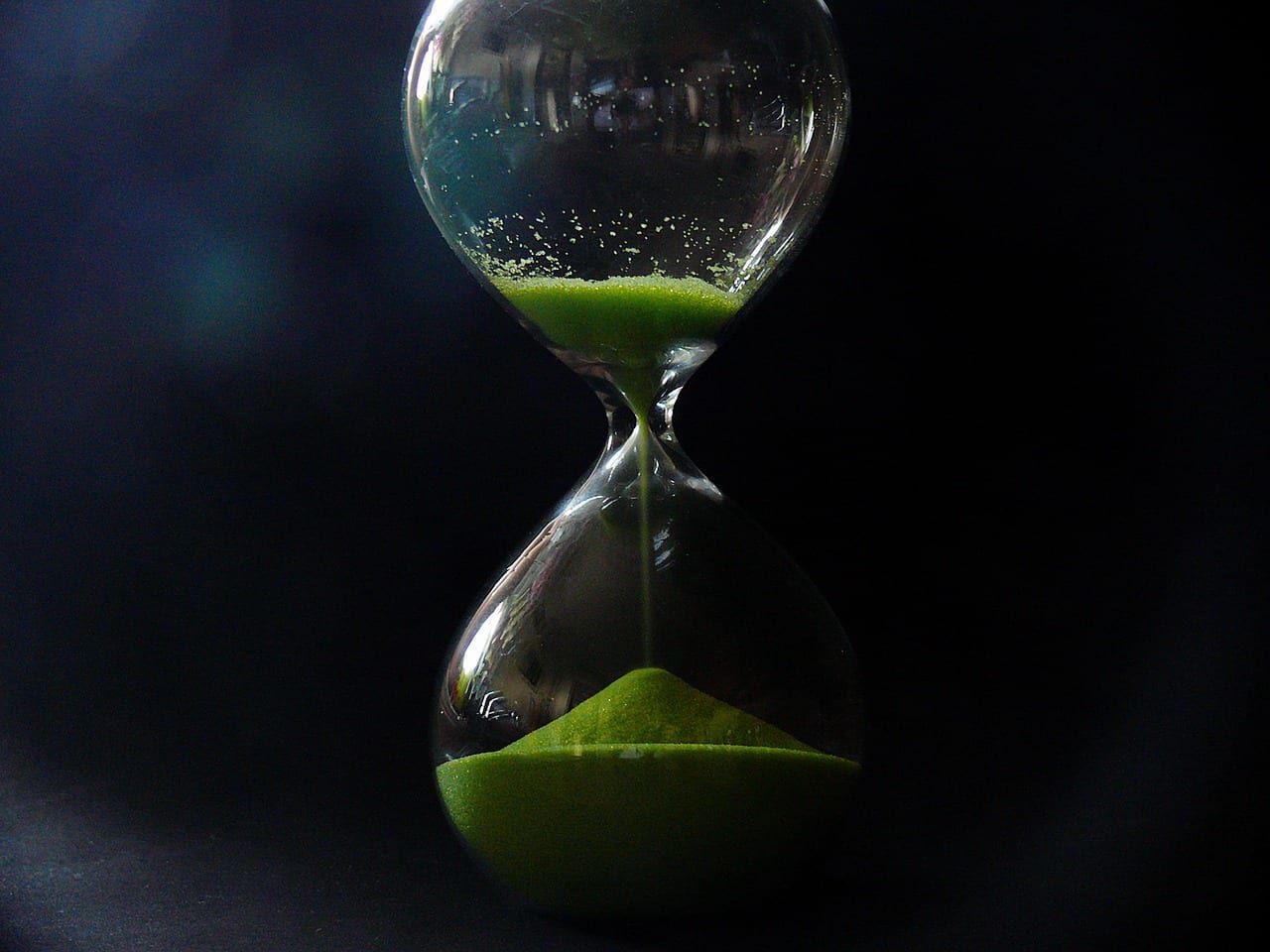 Is the Presence of Differing a Proof for the People of Innovation to Remain and be Steadfast upon their Falsehood and Misguidance?! – Shaykh Rabee ibn Haadi

Verily amongst the Shaikhs of Ahlul Bidah [i.e. leaders of the people of innovated religious affairs] are those that deceive the people and say, “Indeed differing exists even in the fundamentals of the religion”.

Why did Allah  – The Blessed and The Most High – praise this Ummah [i.e. the Muslims] that they enjoin good and forbid evil;

You are the best nation produced [as an example] for mankind. You enjoin what is right and forbid what is wrong and believe in Allah. (Aali-Imraan:110)

The one who rebukes those who say “Our Lord is above the heavens and has ascended above His Throne (in a manner that suits His Majesty)” and he claims that Allah does not have a place, not above, not below, not on the right, or on the left, do we remain quiet about this?!!

Should we remain quiet about the one who says, “I invoke so and so, seeks deliverance from others besides Allah, sacrifice animals for other than Allah?”  Allah – The Most High – said,

And who is more astray (in religion and intellect) than he who invokes besides Allāh those who will not respond to him until the Day of Resurrection and who are unaware of their invocation (which is being directed to them). (Al-Ahqaf:5)

And Allah passed a judgement that he’ll enter the fire – Refuge is sought with Allah. 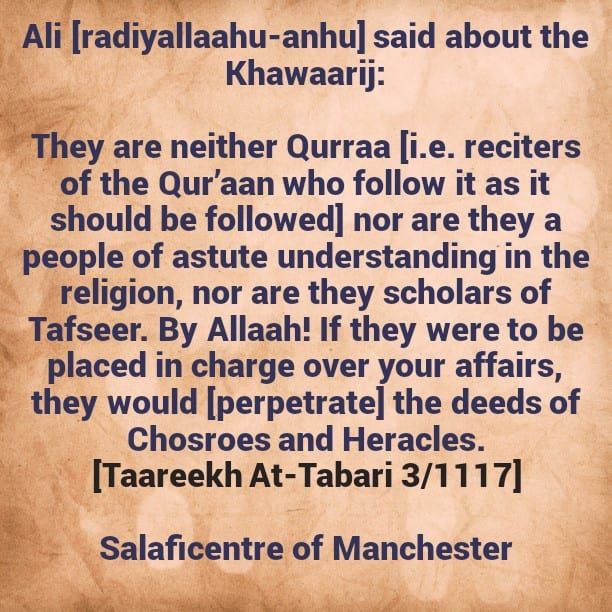 Ali [radiyallaahu-anhu] said about the Khawaarij:

They are neither Qurraa [i.e. reciters of the Qur’aan who follow it as it should be followed] nor are they a people of astute understanding in the religion, nor are they scholars of Tafseer. By Allaah! If they were to be placed in charge over your affairs, they would [perpetrate] the deeds of Chosroes and Heracles amongst you. 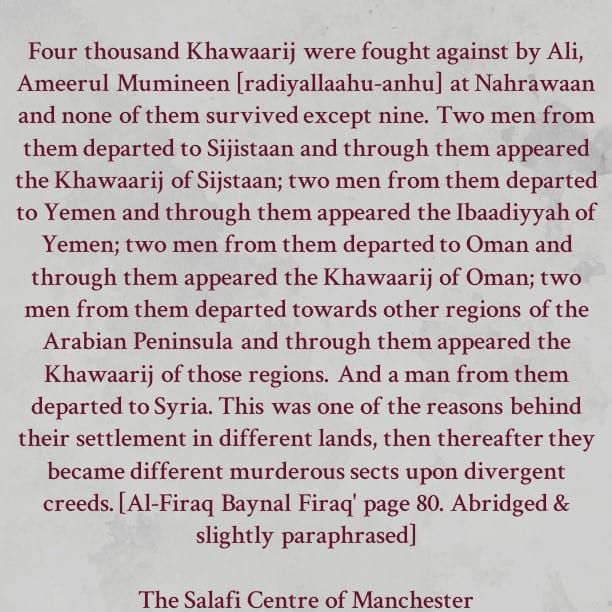 Written by The Salafi Centre of Manchester on May 31, 2017. Posted in Bid'ah (Innovation), Deviated Groups, Sects and Parties, Innovations In Islam (Bidah), Khawaarij.

Written by The Salafi Centre of Manchester on July 23, 2016. Posted in Deviated Groups, Sects and Parties, Innovations In Islam (Bidah), Khawaarij, Methodology - 'Manhaj', Morals and Manners - 'Akhlaaq', Must Read, Refutations. 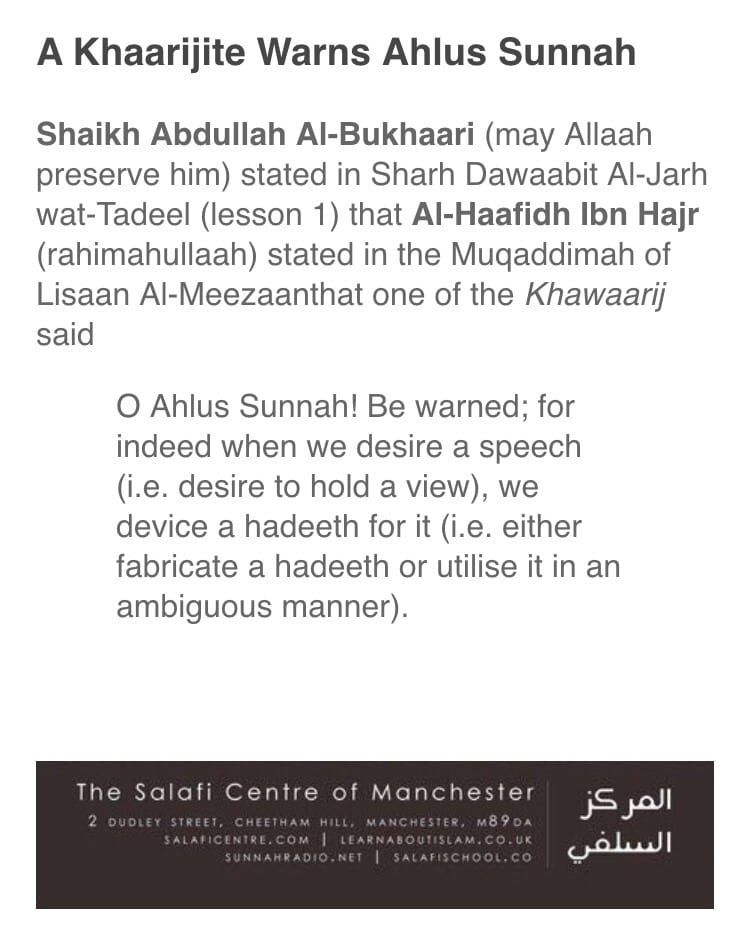 Written by The Salafi Centre of Manchester on February 5, 2016. Posted in Deviated Groups, Sects and Parties.

O Ahlus Sunnah! Be warned; for indeed when we desire a speech (i.e. desire to hold a view), we device a hadeeth for it (i.e. either fabricate a hadeeth or utilise it in an ambiguous manner).

[Arabic] Who are the khawaarij? Shaikh Fawzaan (may Allaah preserve him) responds

Khawaarij are those who rebel against the Muslim Rulers and fight the Muslims, and they excommunicate a Muslim due a Major sin he/she commits…. 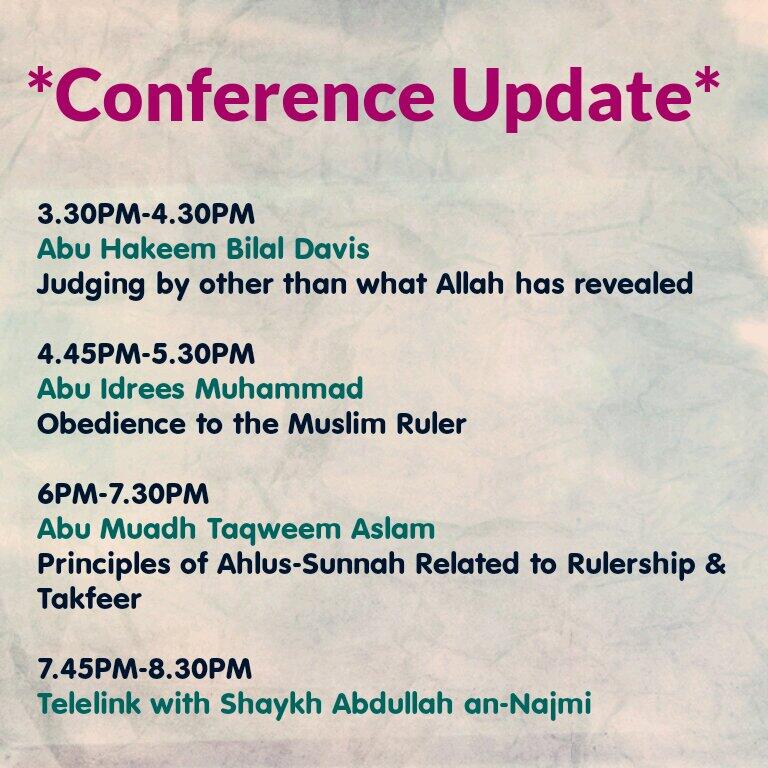 A look into Shariah and the implementation of it. The rulers of the Muslim lands and how a Sunni views the current situation.

A completely free and important lecture for those who want to know about oppression and justice and the forms of government proposed by modern day groups such as Hizb-ut-Tahrir (HT) and the Al Muhaajiroon.