Lies Made Against the Prophets (alayhimus salaatu was salaam) – Shaykh Fawzaan

Shaikh Salih al Fawzaan حفظه الله comments regarding His Statement (The Most High):

It is not (possible) for any human being to whom Allah has given the Book and Al-Hukma (the knowledge and understanding of the laws of religion, etc.) and Prophethood to say to the people: “Be my worshippers rather than Allah’s.” On the contrary (he would say): “Be you Rabbaaniyun (learned men of religion who practise what they know and also preach others), because you are teaching the Book, and you are studying it.” (Surah Aali-Imraan:79)

What is understood from this verse is that it is not suitable with Allah that he would choose for his Messenger-ship and Prophet-hood someone who calls the people to shirk; just as the Jews and Christians would say that the Messengers ordered the worship of the Prophets, Rabbis (1) and Monks (2). Allah (The Most High) said:

They (Jews and Christians) took their rabbis and their monks to be their lords besides Allah (by obeying them in things which they made lawful or unlawful according to their own desires without being ordered by Allah), and (they also took as their Lord) Messiah, son of Maryam (Mary), while they (Jews and Christians) were commanded [in the Taurat (Torah) and the Injeel (Gospel)) to worship none but One Ilah (God – Allah) La ilaha illa Huwa (none has the right to be worshipped but He). Praise and glory be to Him, (far above is He) from having the partners they associate (with Him).” (Surah At-Tawbah:31)

1) Rabbis are the scholars amongst the Jews

2) Monks are the worshippers amongst the Christians 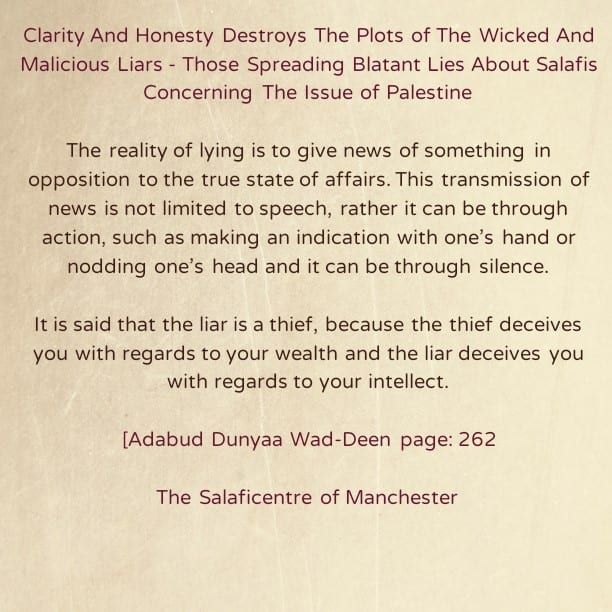 Thorn In The Throats of The Opportunists, Wicked and Malicious Liars –Those Spreading Lies About the Salafis Concerning The Issue of Palestine

The reality of lying is to give news of something in opposition to the true state of affairs. This transmission of news is not limited to speech, rather it can be through action, such as making an indication with one’s hand or nodding one’s head and it can be through silence. [Source: Adabud Dunyaa Wad-Deen of Al-Maawardee]

A reminder concerning the suffering of Muslims in #Palestine & ways we can help them. My tweets dated 19 July 2014: pic.twitter.com/YeFJks0lkR

Short reminder for Mr Farrakhan and Nation–The Hour will not be Established Until….